I was a teenage bride

Getting married at 19 should have been the biggest mistake of my life. Why didn't it turn out that way? 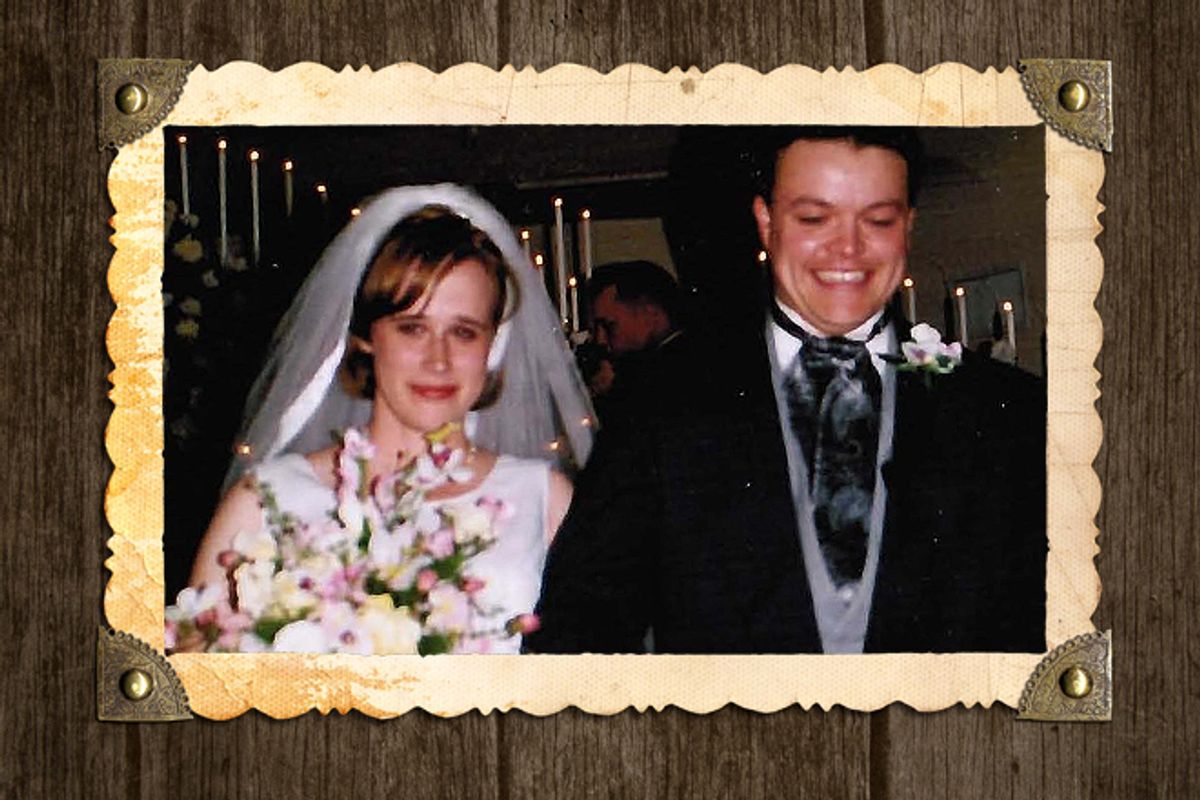 A photo of the author, at 19, and her husband (secondcorner via Shutterstock)
--

Thirteen years (and a handful of months) ago, I sat down with my father at the kitchen table of my childhood home in Kentucky, and I asked him: “Would it make things better if Brandon and I got married? Would that make you happy?”

I was 19 years old and finishing my second semester of college at nearby Western Kentucky University. Brandon, my 24-year-old boyfriend, had decided to pursue a second degree in architecture at University of Kentucky, two-and-a-half hours away, and I had resolved to follow him there and share an apartment with him.

My father -- an intelligent, gentle man who fits no one’s stereotype of what a rural Kentucky factory worker must be like; who doesn’t go to church and didn’t raise me to think in religious absolutes -- had nonetheless balked at this plan for living in sin, had told me, with quiet, halting intensity, that I didn’t understand what I was doing. What if I followed Brandon to Lexington, compromised myself by sharing a home with him, and then got dumped? He didn’t say the words “fallen woman.” He didn’t have to.

“Yes,” my father said in response to my question, his relief palpable. “Yes, it would be better.”

Four months later, on Aug. 14, 1999, Brandon and I married at the Post Oak Baptist Church in Russellville, Ky. I wore a white wedding gown with not one but two crinolines underneath the skirt, and my father walked me down the aisle. He was tearful, clutching my free hand between both of his. I was sobbing. At the reception in the church’s dreary Fellowship Hall, my husband and I toasted one another with nonalcoholic sparkling grape juice.

In the video and photographs of that day, I look terrified and devastated -- more like a woman approaching the casket of a loved one than a young bride embarking on a lifetime of bliss. And my memories of my wedding do not give the lie to those images of a trembling child with red, tender-looking eyes, a child wearing an ill-fitting, puffy princess dress that bunched awkwardly around her father’s hip as they made their grim procession toward the altar.

In high school I had been a straight-A student, feigning rebelliousness in rock T-shirts, old flannel and black eyeshadow. I had written editorials for the school paper about my desire to flee what my best friend and I called the Russellville Vortex. How had I become a teenage bride? How had my older boyfriend, an art student in red Chuck Taylors with paint splatters on his cut-off shorts, become my lawfully wedded husband?

I was following Brandon to Lexington out of love, but I married him because I didn’t want my father to think less of me. That is the long and short of it.

There is a photograph of Brandon on our wedding day that makes me laugh now but at one time made me heartsick with guilt. In it, he is grinning broadly, so broadly that the muscles in his face are tight, and his hands are clenched victoriously at his sides. “You look so happy here,” I told him once, as we flipped through the album together, and he said, “I was happy. I was just happy to be married to you.”

This is a story that should not have a happy ending, that should be a cautionary tale about making decisions before you’re old enough to understand their implications, or letting vague notions of religious and cultural correctness send you down the aisle with a metaphorical shotgun to your back. To suggest otherwise is dangerous, I realize; I say this as a liberal, a feminist. I say this knowing that if my own hypothetical child were to come to me at 19 wishing to marry her first serious boyfriend, I would argue with her, beg her to wait, to live her life, consider the options.

I would be lying, of course, if I claimed that I have not had moments of depression and doubt over the years, wondering about the course of that parallel me, the one who did not get married. I wonder who I would have become if my roots weren’t planted so closely to my husband’s, so that the two of us have grown not just up but together, into an interdependent being with the same home and habits, many of the same memories and broad life goals, the same jokes and turns of phrase.

Even our differences -- anyone who knows us would say they’re significant -- have become symbiotic, amplified and exaggerated in the face of their opposite: his calm to my anxiousness, my careful planning to his spontaneity. I know I can indulge in panicked overreaction because Brandon will be there to talk me down. He knows that he can put off sending his cousin a baby gift because I will remind him. To wrench us apart now would be to send two half-formed beings out into the world, and sometimes that embarrasses me.

If I wanted to scare my hypothetical daughter into waiting, I would have plenty of stories to tell about our first difficult years of young matrimony: how we lived for so long without health insurance, or how our bank account dwindled so frequently to the double digits that to this day I still irrationally dread logging online to check our balance. But worse, probably, was the isolation -- the sense that being married at that age and in college full-time disqualified us from the advantages of either state: the parties and friendships and experimentation on one end of the spectrum; home ownership and financial stability on the other.

My marriage was a kind of secret. Undergraduates weren’t in the habit of noticing wedding bands, though I wore one, and so there always came a moment when I had to explain myself or make a decision to avoid telling the central truth of my life. When I did confess, the reactions were often baffled and pitying, or scornful. “Oh my god, your parents must have been pissed,” one person said. And, many times: “Were you pregnant?” My marriage, I came to believe, made me look provincial, even unintelligent in the eyes of my peers, and I didn’t make a single friend of my own age in that time spent completing my undergraduate degree.

But something else was happening in those early years -- a kind of magical thinking, a shared delusion, possible because my husband and I had nothing but each other and our dreams of artistic greatness. Brandon pulled overnights at the architecture studio, building giant sculptures from cardboard and welded metal, later one-inch scale models of homes and public spaces. I would pick up fast food for him, bring it late at night to his workspace, where snips of balsa wood and chipboard littered the cement floors and students sometimes built makeshift bunks to catch quick naps before morning reviews.

I started taking creative writing workshops, and Brandon proved an enthusiastic audience for my fledgling fictions. We formed a still-enduring ritual: I would sit at the computer, he in a nearby rocking chair or on our bed, and I would read my drafts aloud to him. “It’s really good,” he always assured me. “I can visualize everything you’re describing.”

We indulged in impracticality, answering not to our parents but to each other, and we were young enough to lack the wisdom to doubt ourselves, just as we’d lacked the wisdom to doubt that we could make our marriage work -- or to let our doubts dissuade us. “You can do it,” we kept saying to one another, which was easy enough, living as we were without status, on student loans, with the cheap agency our marriage license afforded us.

My writing professor and mentor, Nikky, saw what most everyone else missed, and her understanding -- her approval -- lit me up, made me feel like I wasn’t so out of place in college, after all. “How is your sweet husband?” she would ask when I came to her office for conferences. “What the two of you have is a good thing,” she insisted. “Hold tight to him.”

Thirteen years later, on our wedding anniversary, we are living the life we made out of those bold and careless choices -- and it’s a good life. We have graduate degrees and teaching positions at universities within half an hour of one another. We have a mortgage and a car loan, a lifetime of student loan debt, two dogs, and a group of friends, most of them couples, marriage now being the rule of our age rather than the exception. Brandon just received an arts grant to convert our backyard shed into a wood shop, where he can more easily execute his complex, sculptural furniture designs. Those stories I first read aloud to Brandon were published in journals, and then in a book.

There are days when we look at each other with stunned expressions, and one of us says, “I could not have done this without you.” And it is true. Somehow -- and it should not have been this way -- getting married at 19 was the best bad decision I’ve ever made.

Holly Goddard Jones's debut novel, "The Next Time You See Me," will be published in February by Touchstone Books.