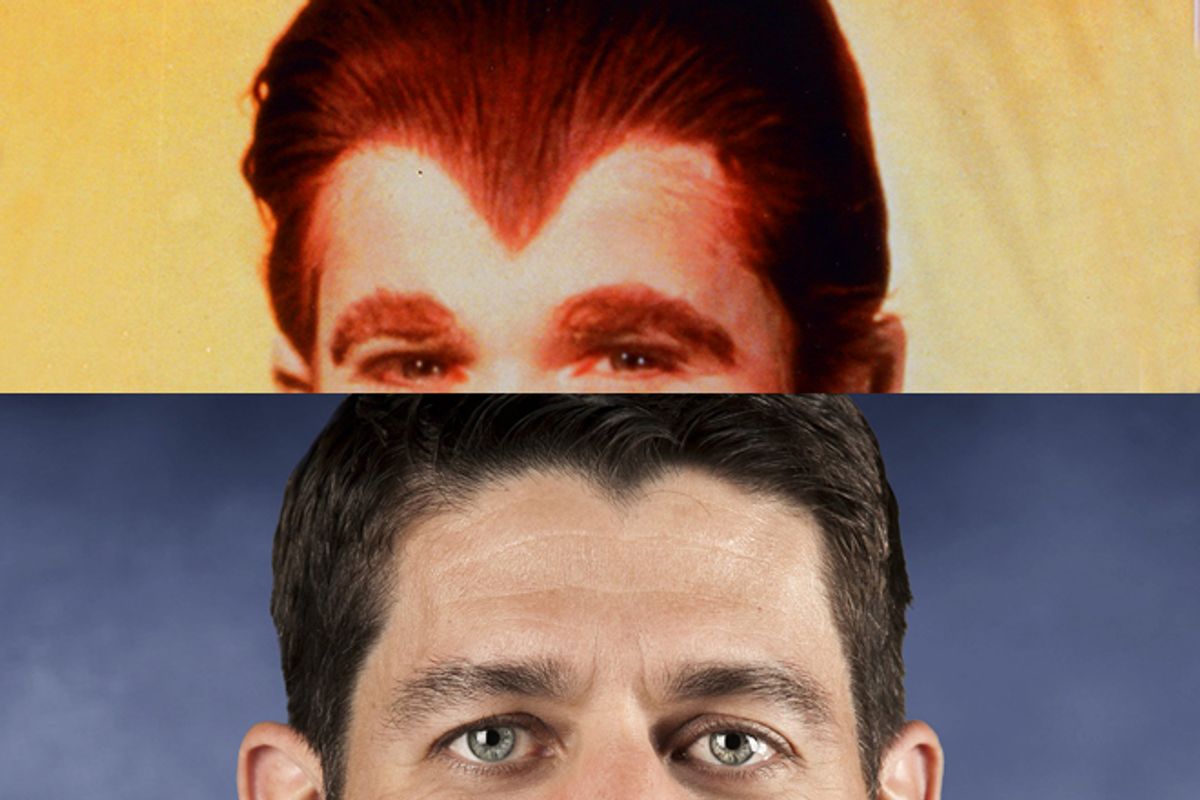 Paul Ryan’s political views place him on the right -- maybe even the far right -- but a prominent feature of his thick dark hair appears at the center of his forehead: a “widow’s peak,” or what is more correctly called a “widower’s peak” when it appears on a man.

The widow’s peak knows no political party. It refers to a hairline that forms a V pattern at the top of the forehead, rather than a straight or rounded shape. The widow’s peak is a dominant trait, meaning that it tends to appear in each generation rather than simply being carried in the genes as a recessive trait. Hair loss caused by aging can also create the effect of a widow’s peak.

Though we now use the phrase “widow’s peak” to talk about hair, the idea might have begun with a hat worn by a stylish royal named Anne of Brittany (1477-1514). As a young duchess, Anne was known for her beauty and fashions, as well as her intelligence and character. After her husband King Charles VIII of France died, she rejected the idea of wearing white, then the customary color for bereaved royals. The distraught widow declared that white hardly suited her mood, so she appeared in dark clothing and a specially designed black V-shaped bonnet that came to a point on her forehead.

Anne, who would become one of the wealthiest and most powerful women in Europe, remarried the very next year, to the French King Louis VII. Some historians think this gave rise to a superstition that women whose hairline took the form of what was later called a “widow’s peak” would be widowed at an early age but then remarry quickly (though not, as in Anne’s case, to two French kings). A slightly different and more widely known superstition held that women with this type of hairline would outlive their husbands.

The custom of wearing a mourning hat or hood with a point, called a "biquoquet," took hold in Europe after 1530. Centuries later, in the early 1800s, the phrase “widow’s peak” came to mean a V-shaped hairline. Meanwhile, women in some countries continued to wear black mourning hoods or caps with a point or peak on the forehead. This style had a revival during the late 1800s, an era known for strict mourning attire. Women in Victorian society decided that wearing black clothing wasn’t enough to set widows apart, since black had become more common in everyday dress. They added the black pointed hat to their ensembles.

Like other styles in hair, the widow’s peak has gone in and out of fashion. In Japan, for example, noblewomen of the Heian era (794-1185) prized the look of a high forehead with a distinct widow’s peak. Those who had such a peak emphasized it while other women created such a point on their forehead with makeup. In more modern times, a widow’s peak has been a signature look for some. President Franklin D. Roosevelt’s cousin Laura Delano was known for her eccentric purple-dyed hair with a painted-on widow’s peak. Actress Marilyn Monroe supposedly shaved her widow’s peak at times, but in some photos this feature shows clearly as a part of her overall hairstyle.

Widow’s peaks have been associated with villains, including vampires, since the 1920s. This was one of the signature looks of Jack Pierce, a legendary Hollywood makeup artist best known for his monster work from the 1920s into the 1940s at Universal Studios. Photographs show that the Greek-American Pierce had a widow’s peak of his own. In two 1931 films, Pierce had Hungarian-American actor Bela Lugosi and Spaniard Carlos Villarias wear toupees with a widow’s peak for their roles as Dracula. For the 1932 film "White Zombie," Pierce emphasized Lugosi’s artificial widow’s peak even more. When Boris Karloff starred in "The Black Cat" (1934), Pierce shaved his hairline and created an arrow-shaped widow’s peak. The classic look for werewolves in films and Halloween costumes also features a widow’s peak of canine fur along the hairline. In cartoons, Batman’s adversary, the Joker, has been portrayed with a widow’s peak.

Some scientists now believe there may be a very real connection, however, between vampires and the widow's peak. They point to the rare genetic diseases called porphyrias. Sufferers often have pale skin, the appearance of red teeth and also excessive hair growth on the forehead, which could well have inspired writers of the early vampire myths, suggests David Dolphin, an organic chemist at the University of British Columbia in Vancouver.

During this 2012 election season, political cartoonists have latched onto Paul Ryan’s distinctive hair, and some pundits have made comparisons between the V.P. choice and Eddie Munster, a character in a 1960s TV sitcom “The Munsters” and several related feature films. In the TV series, actress Yvonne DeCarlo, who played Eddie’s mother, Lily, wore a long white-streaked black wig with a distinctive widow’s peak. It was natural that young Eddie should inherit this family trait.

People of both sexes can choose haircuts and styles that cover or play up this feature. To conceal a peak, hairstylists suggest a side part, layering or bangs, including spiky effects. For those who don’t mind displaying their widow’s peaks or even like to emphasize the look, a center part, buzz cut or style that pulls hair back from the forehead will work.

It's believed that Ryan would be the first vice president with a widow's peak. But a look at presidential portraits shows that at least two previous chief executives sported a widow’s peak: Andrew Jackson and Ronald Reagan.