Kansas gets even crazier 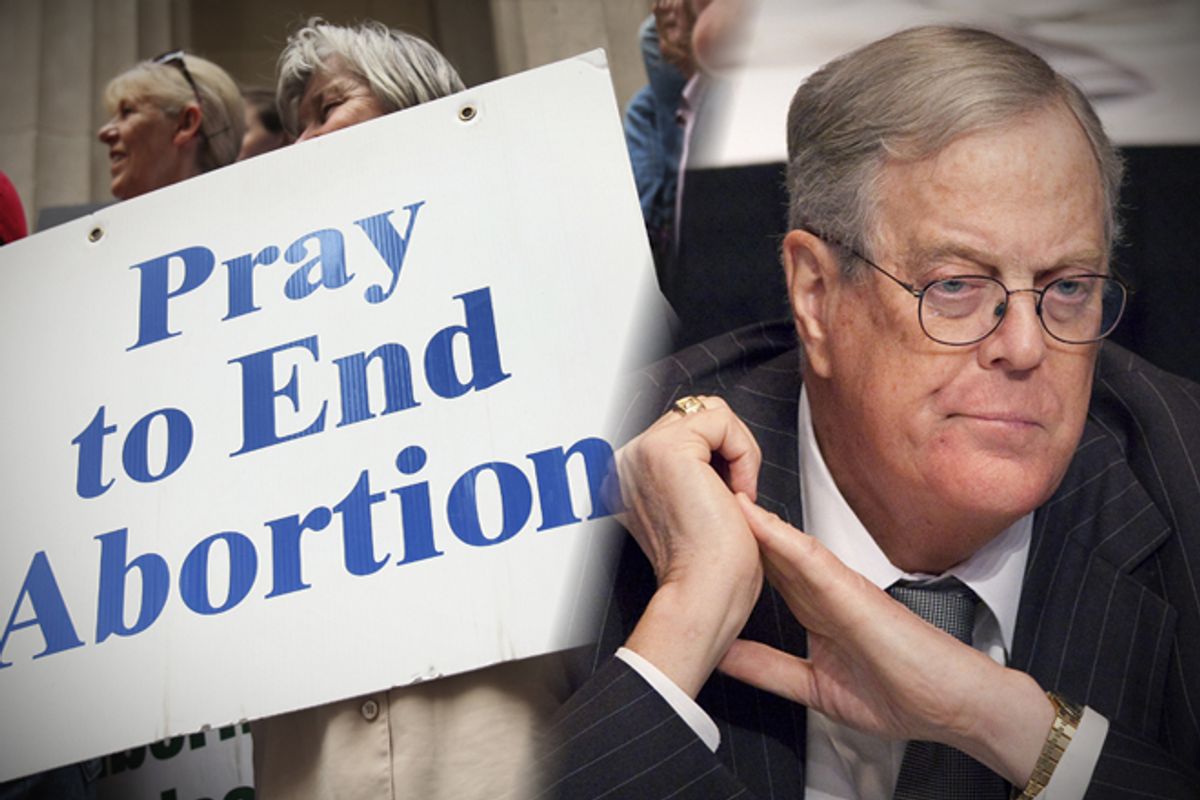 Aug. 7 was a very good night for people who want to drive safe abortion out of Kansas. Republican primary voters ousted relative moderates from the state Senate, laying the groundwork for Gov. Sam Brownback to push through his right-wing agenda, both economic and social.

The former got more attention. The election was evidence of "America's grass-roots voter rebellion," in the words of the Wall Street Journal opinion page, or it was, in the words of one ousted state senator, an example of Kansas-based Koch Industries, which threw a lot of money at the race, being "just a terrible, terrible citizen as far as I'm concerned."

But it was also about abortion, in a state that is arguably more obsessed with it than any other. And abortion foes want proper credit.

"These elections were characterized as a referendum on pro-life Gov. Sam Brownback’s conservative agenda, with the media repeatedly identifying economic conservative groups as major players," Kansans for Life said in a blog post. "But the GOP rout depended on the candidates’ pro-life credentials and is a reflection of Kansas pro-life persistence, hard work and prayer."

It was also a reflection of a concerted alliance between groups like the Kansas Chamber of Commerce, which received more than half of its war chest from the Koch brothers, and the state's famous antiabortion hard-liners. The result is a purge not only of centrist Republicans, but even consistently antiabortion politicians who had nevertheless angered Kansans for Life.

That includes Senate president Steve Morris, who, Kansans for Life wrote indignantly, may have had a "pro-life record, but then betrayed it by rigging Senate committees with pro-abortion majorities and working behind the scenes to hurt pro-life bills!" The group continued, "But due to the pro-life routing of ‘moderates’, there is a real possibility that after the November elections, as many as 32 out of 40 Kansas Senate seats could be filled by trusted pro-lifers!" Morris did not respond to a request for an interview.

In a state that just marked the third anniversary of the murder of abortion provider George Tiller and where a court injunction is the only thing blocking the closure of all but one of its abortion clinics, this is no small matter. Kari Ann Rinker, the state coordinator and lobbyist for the Kansas National Organization for Women, told Salon, "The only thing that’s been saving Kansas from complete insanity is this bloc of moderate Republicans."

The obsessive focus on limiting reproductive rights in state legislatures and the House of Representatives gives the lie to the idea that Tea Party radicals and social conservatives were different beasts. The Kansas primary represents the apotheosis of their coordinated efforts: Morris, whose Senate was the only bulwark against the wholesale adoption of the Brownback agenda, told the Huffington Post after his defeat last week that Americans for Prosperity, the Club for Growth, the Kansas Chamber of Commerce and antiabortion groups spent in the range of $3 million and $8 million on beating him and his allies, with an eye to major tax cuts, an overhaul of school funding and clamping down on labor unions.  Meanwhile, Brownback's chief of staff, David Kensinger, resigned to start a consulting firm that went on to finance Kansans for Life's political action committee, throwing $15,000 their way.

"It does cause a person to ponder whether the 'pro-life' movement has successfully taken control of the Republican Party or vice-versa," Rinker wrote on RH Reality Check, declaring that "the state of Kathleen Sebelius and Nancy Kassebaum" has become "Brownbackistan."

Morris drew the ire of antiabortion groups when he blocked a bill, already approved by the House, that officials worried would harm the accreditation of the Kansas University Medical Center's obstetrics and gynecology program by putting heavy restrictions on abortion training and practice. “I have consistently voted pro-life,” he said in May. “While I will always fight for pro-life values, we must also protect the accreditation of our flagship medical center.”

Another Republican state senator, Pete Brungardt, endured protests outside his optometry practice for his relatively pro-choice position, and lost his seat, as did pro-choice Republican moderate Sen. Jean Schodorf and others. Even without the onslaught of spending, the Legislature was in for an overhaul, with both a round of retirements and redistricting that pitted two pro-choice candidates against each other. "The result, based on the primary, is the House will have at least 45 new members in January — a turnover rate of 36 percent in the 125-member chamber. The minimum turnover in the Senate will be 32 percent, with 13 newcomers among the 40 seats," reported the Tokepa Capital Journal.

One of the few election results that didn't go the way of antiabortion extremists was the Sedgwick Country district attorney's race, in which Operation Rescue had taken a keen interest. It was a Republican primary with no Democratic candidate, in which both candidates tried to outdo each other in their opposition to abortion. Operation Rescue opposed Deputy District Attorney Marc Bennett's candidacy because of his association with his outgoing boss Nola Foulston, who as D.A. refused to sanction the hyper-politicized investigations against George Tiller's clinic. (Former Attorney General Phill Kline is under investigation for ethics violations in how he pursued Tiller -- ultimately fruitlessly.)

Operation Rescue's Troy Newman outrageously blamed Foulston for Tiller's murder, because she supposedly forced the killer's hand. "If Nola Foulston had done her job with George Tiller, he would still be alive today," he told the AP before the election. (Rachel Maddow later condemned the AP for reproducing this wild claim unchallenged and for failing to note the murderer's ties to Operation Rescue.)

"When I read that," says Rinker, "I felt like someone kicked me in the stomach. And living here, I don’t even get that feeling that much."

Tiller's clinic remains closed, despite two separate efforts to restore abortion access to Wichita. One doctor, Mila Means, even purchased Tiller's equipment, but it remains in her basement after a struggle to find a willing landlord, and now has her hands full with an impending trial against an antiabortion extremist who threatened her life.  Thousands of people, wrote Angel Dillard, who had befriended Tiller's murderer, "will know your habits and routines. They know where you shop, who your friends are, what you drive, where you live. You will be checking under your car every day — because maybe today is the day someone places an explosive under it." And Rinker, though she was advising Means, remains skeptical about any clinic being able to open in the coming legislative climate.

Kansas in general, and Wichita in particular, remain highly symbolic, dating back to the 1991 Summer of Mercy protests that roiled the city. It's a history traced by Stephen Singular's recent book, "The Wichita Divide: The Murder of Dr. George Tiller and the Battle Over Abortion," for which he visited Tiller's murderer, Scott Roeder, in jail. Singular writes that on that visit, Roeder "paused, made eye contact with me through the glass, and forcefully stated, 'I stopped abortion in Wichita.'”

That's still true, and after this election, it seems unlikely to change.