This year, protesters plan to target the Democratic and Republican National Conventions with equal force 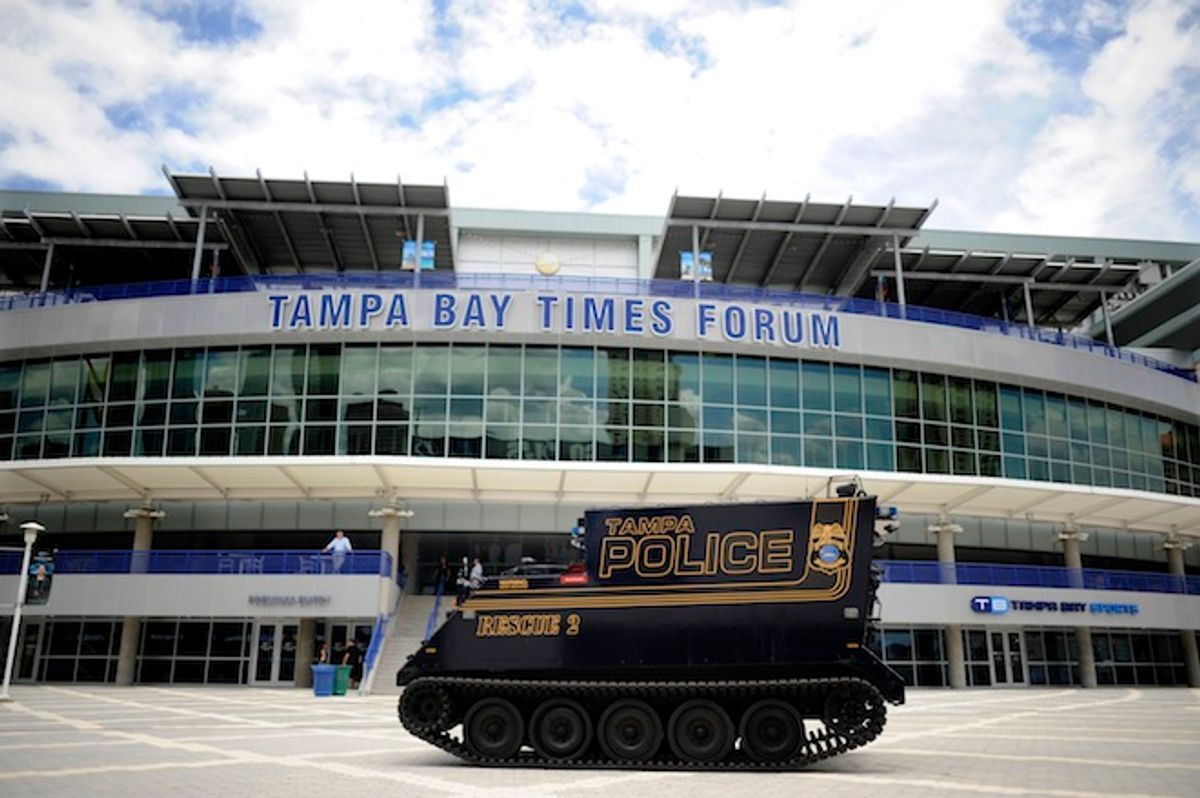 A Tampa police armored vehicle is parked outside The Tampa Bay Times Forum in downtown Tampa, Florida August 3, 2012. The Republican National Convention will be held at the Forum from August 27 to August 30, 2012. (Reuters/Brian Blanco)
--

In Nobel Prize-winning novelist Jose Saramago’s 2004 book, "Seeing," the people of an unnamed but uncanny nation take to the ballots and cast more than 80 percent blank votes in defiance of their corrupt, disengaged political parties. Saramago’s earlier novel, "Blindness," tells of the same nation, four years earlier, when the populace is struck by a sweeping epidemic of blindness, producing havoc, despair and cruelty. What is the link, demand the authorities in "Seeing," between “the plague of white blindness and the plague of blank ballots”?

If you see nothing hauntingly prophetic in Saramago’s near decade-old narrative, you may struggle to understand many of the protests planned for both the Republican and Democratic National Conventions this year. Thousands of protesters will head to Tampa, Fla., or Charlotte, N.C., or both, with no intention of supporting either party. Unlike in 2008, when counter-DNC antiwar demonstrations numbering in the hundreds were dwarfed by anti-RNC crowds over 10,000-strong in Saint Paul, Minn., this year much of the planned protest takes aim at both parties and their corporate underpinnings. Much of the "Hope" (or, pace Saramago, “blindness”) from four years ago has long cleared up and the DNC and RNC protests look likely to share tone, relative size -- anywhere between 2,000 to 15,000 protesters in each city -- and even many participants.

“Both of the mobilizations are against the parties of the 1 percent,” Ben Carroll, a Charlotte-based organizer with the Coalition to March on Wall Street South (subtitle: Building People’s Power at the DNC), told Salon. Carroll stressed that even though the coalition does not take aim at the Democrats in its title, the broad network of labor, immigrant rights, student and community activists plan to protest corporate interests' “pulling the strings of the entire political system,” with a permitted march and rallies and performances around the DNC in the first week of September. “It’s an important opportunity to highlight the role Charlotte plays in the global financial system; it’s the second-biggest financial center in the country, hence ‘Wall Street South,’” noted Carroll, adding that the hope is that groups will continue to organize and mobilize long after Barack Obama closes his speech at Charlotte’s Bank of America stadium and the political media leave North Carolina, where state workers have no collective bargaining power and union membership is the lowest in the country.

Other groups organizing around the DNC are more explicit about protesting some of the president’s most decried policies (and I’m not talking about the reliable contingents of pro-lifers, evangelicals and Obama-hating racists who will also protest the DNC). Antiwar activists and Occupy participants from around the country will take part in "Occupy the Military Industrial Complex," which aims to launch an Occupy-style camp in Charlotte’s Frazier Park, beginning on Sept. 4 with a dance party “in the Charlotte streets” in honor of imprisoned Pfc. Bradley Manning. John Penley, a Vietnam veteran and longtime antiwar activist and Occupy participant who is organizing the Frazier Park event, is vociferous against fellow occupiers who “take a side in this rigged election.” Penley quipped that he would this year be writing in his ballot for Vermin Supreme (the anarchist performance artist who wears a boot on his head and is running on a platform of zombie apocalypse awareness). He hopes that the Occupy resistance to aligning with Democrats continues in Charlotte: “The general consensus was always that Occupy wouldn’t take either side; both are parties of big banks and military industrial complexes,” he said.

The protest plans for both Charlotte and Tampa are steeped in the relatively new parlance of Occupy actions but continue a much longer history of convention demonstrations. Many Obama supporters (even the reluctant “at least not the other guy” voters) remain haunted by the idea that the police riot and mass protests during the 1968 DNC in Chicago lost the Democrats the presidency to Nixon that year; it’s been a constraining narrative on left and radical DNC protest ever since. DNC protesters this year will range from those staunchly opposed to representational, electoral politics, to those disillusioned with our current representatives, who will express grievances in Charlotte and may or may not end up voting for Obama this year anyway. No doubt buoyed by what remains of Occupy resonance, however, protesters will not let the Democratic convention off the hook. Indeed, some protesters have even chartered a small caravan of buses to travel from the RNC to the DNC the following week.

“We stand in solidarity with the DNC protests. The overall message is that neither party is representing the people any longer,” said Tampa-based Amos Miers, an organizer with ResistRNC, a group helping to coordinate support and logistics for up to 15,000 expected protesters. As in Charlotte, Tampa has its own Coalition to March, although organizers opted for the direct "March on the RNC" title. As with the DNC, the Coalition in Tampa is bringing together labor, student, antiwar and immigrant justice groups for a permitted march and rally “ending within sight and sound of the convention,” according to organizer and Teamster Jared Hamil, who again echoed Carroll’s message that the protests would take aim at the “1 percent.”

Groups in both Tampa and Charlotte have publicly stated that their plans for protest are peaceful, although a mixture of permitted and unpermitted actions are planned. The Coalitions to March in both convention cities have adopted their own versions of what were originally the “Saint Paul Principles,” used by RNC 2008 protesters. The principles include a respect for “diversity of tactics,” such that if a group chooses to adopt more radical or less law-abiding tactics than another protest contingent, they will not be obstructed. Above all, the principles stress that activists will not assist law enforcement action against other activists, regardless of a disagreement in tactics. Whether groups will break windows, burn dumpsters, damage property or even adopt Black Bloc anonymity tactics to move through the streets cannot be predicted and would never be publicly announced in advance.

“I think less than 10 groups have formally gone through the process to register to use a park to protest or to announce they're going through the official parade route. I guess that's their way of saying, 'We won't play this game.' The Tampa Police Department is aware that there'll be more protests than what are officially scheduled,” Mitch Perry, news and politics editor of Tampa alt-weekly Creative Loafing, told Salon.

In both Tampa and Charlotte, an equally extensive security apparatus will be in place to control dissent. Both cities received $50 million in federal funds to beef up security, and both will bring in more than 3,000 officers from outside police departments. In Charlotte, the city manager declared the DNC an “extraordinary event,” which permits the marking off of a large part of the city in which police officers have extended authority to search and possibly arrest individuals for carrying items like hammers or glass bottles, or masking their faces. Meanwhile, Tampa has introduced an “event zone” for the RNC (originally called “Clean Zone” before public backlash forced a nomenclature rethink), where similar objects are banned and police authorities are extended. The establishment of (ever-Orwellian) “free speech zones” for rallies serves as rankling proof that, as a base line, speech is far from free during the conventions; you have to go to special, cordoned-off areas for that.

“Of special concern to us is the coordination of federal and local law enforcement and intelligence agencies associated with National Special Security Events,” said Heidi Boghosian, executive director of the National Lawyers Guild, which will have attorneys and legal observers on hand “around the clock” in Tampa and Charlotte. Boghosian expressed concern too for “police coordination with the private sector, the latter of which has vast resources and immunity for committing constitutional infractions, seen so clearly in the Occupy movement.”

Militarized policing of protest has become the norm in response to mobilizations at political conventions and characterized the policing of Occupy actions. The same is expected in Charlotte and Tampa, and indeed this mode of policing dissent has Floridian roots. The so-called Miami Model of crowd control, developed in response to large-scale protests in 2003 in Miami against the proposed Free Trade Area of the Americas agreement, includes, as Boghosian put it, “enacting special anti-protest ordinances, creating a joint, multi-agency command network, using violent crowd control techniques, vilifying protesters in the media, infiltrating and disrupting protest organizers, creating militarized zones, and engaging in visible and intimidating displays of force.” Protesters and legal observers expect to see the Miami Model in full effect in both convention cities.

Which brings us neatly back to Saramago and his dark, un-distant fiction, in which refusal to play the game and pick a political party or leader is met with a draconian state response. United in asserting that Obama/Romney, Democrat/Republican do not exhaust all political space, thousands of protesters at the RNC and DNC will not choose a party and will face equally militarized convention cities.