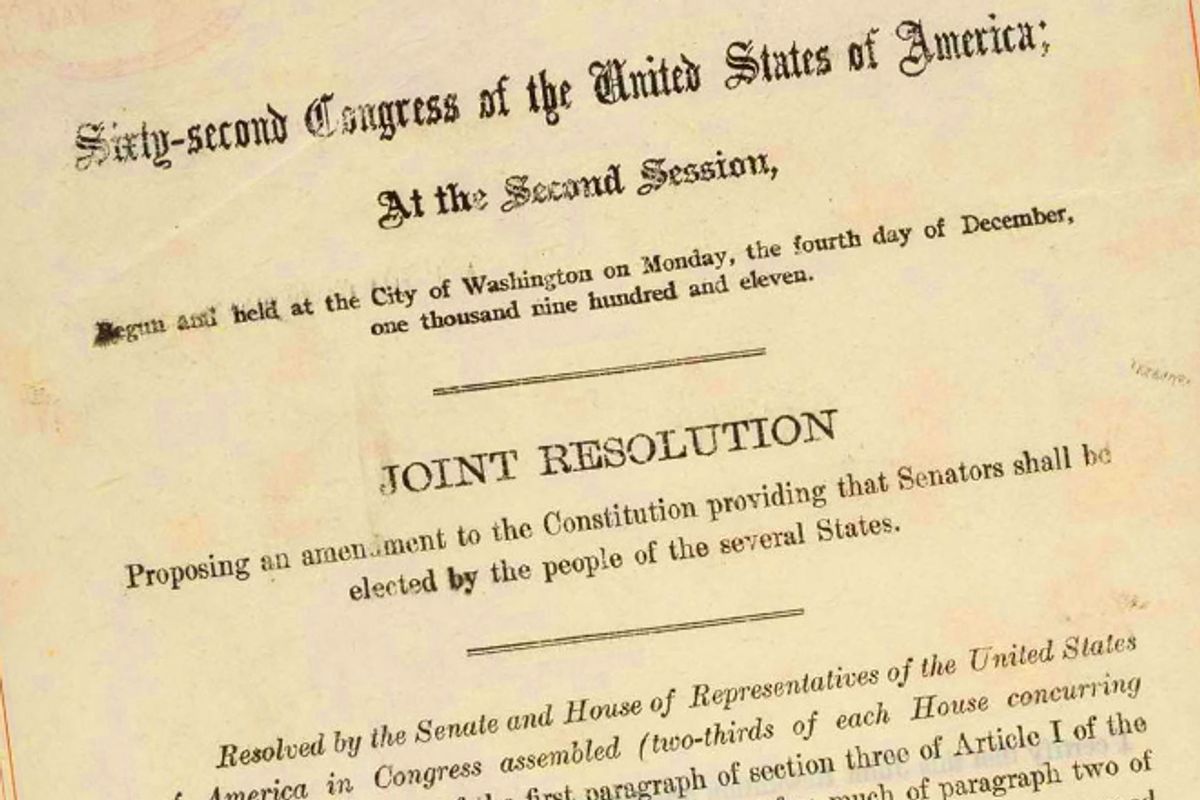 America, we’re told from a young age, is all about democracy, and democracy is all about choosing whom you want to be your representatives and holding them accountable. This seems like an entirely uncontroversial idea, but a surprising number of Republican politicians would like to do away with this right, and return the country to an older era when Americans didn’t directly elect their representatives in Washington.

Until 1913 and the ratification of the 17th Amendment, Americans didn’t actually elect senators, state legislators did. The change seems unquestionably positive, but Rep. Jeff Flake, the front-runner for the Republican nomination for a Senate seat in Arizona, said this week when asked about repeal,"I think it’s better as it reinforces the notion of federalism to have senators appointed by state legislatures.” After he caught some flak for the remark, a spokesperson clarified, "As a supporter of the principle of federalism, Jeff Flake believes that the Framers of the Constitution gave state legislatures the power to appoint U.S. senators for good reason. However, he has not called for the repeal of the 17th Amendment.”

Rep. Todd Akin, who recently won a Republican Senate primary in Missouri and will face off against Democratic Sen. Claire McCaskill, said in May, “I have a very serious concern about erosion of states' rights, and reversing this [17th Amendment] might pull that balance back.” He said he was “leaning” in favor of repeal. Rep. Pete Hoekstra, the Republican nominee in Michigan running against Democratic Sen. Debbie Stabenow, said recently when asked about repealing the amendment, “I think that would be a positive thing.” “The direct election of U.S. senators made the U.S. Senate act and behave like the House of Representatives. The end result has led to an erosion of states’ rights,” Hoekstra said in November. Richard Mourdock, who recently ousted longtime Republican Indiana Sen. Dick Lugar in a GOP primary, agrees. “You know the issue of the 17th Amendment is so troubling to me ... The Senate was there to represent the states. In other words, the government of the states,” Mourdock said in May.

This goes back a couple of years now. Sen. Mike Lee, the Ivy League-educated Tea Party judicial mastermind from Utah, told CNN in 2010 that “the 17th Amendment was a mistake.” Texas Gov. Rick Perry also called the amendment “mistaken,” as did Rep. Paul Broun, a Republican from Georgia. Even conservative Supreme Court Justice Antonin Scalia said in 2010, “I would change it back to what they wrote, in some respects. The 17th Amendment has changed things enormously ... [Y]ou can trace the decline of so-called states’ rights throughout the rest of the 20th century.” Alaska’s 2010 Republican nominee Joe Miller and perennial GOP candidate Alan Keyes have also signed on to the cause.

Why would anyone want to take away people's rights to elect their senators? Repealing the 17th Amendment has long been a hobbyhorse of the fringe right, but the Tea Party and Paulite libertarians popularized it, along with their fetishization of a revisionist view of the Founders and states’ rights. The idea is that if state legislators elect senators, Congress will be responsive to the needs of state governments, and thus preserve states' rights and prerogatives. As with many right-wing ideas that emerged from the fringe, this one appears to have started with the John Birch Society. As Mother Jones’ Kevin Drum wrote in 2011, when Perry was getting attention for his anti-17th Amendment views, “it's popped up periodically on the fringe of movement conservatism ever since. In the 80s, W. Cleon Skousen, a big early influence on the JBS and later a big influence on Glenn Beck, began pitching repeal of the 17th Amendment again, and a few years after that Ron Paul took up the banner. Former Sen. Zell Miller of Georgia introduced a bill in 2004 to repeal the amendment, and in 2009 repeal became a talking point among the Tea Party crowd.”

Beyond states' rights and glorification of the past that didn't exist, the opposition to the amendment may tap into the same notion that drives some support for restrictive voting laws and suggestions that people who don't pay taxes or who receive government assistance are somehow not full citizens.

But repealing the 17th Amendment would be far worse than merely undemocratic. In fact, democracy wasn’t the main motivation behind the amendment at all; corruption was. If you think campaign finance is bad now, image how much easier it is to buy an election when you only have to reach a handful of state legislators instead of an entire state’s electorate. Lewis Gould, a history professor emeritus at the University of Texas at Austin who wrote a book about the Senate in the 20th century, told Salon that by the turn of the century, there was a “stench in the nostrils” of many Americans about how senators were elected. “It was much easier to manipulate and much cheaper -- the cost per vote was much smaller,” he explained.

The Senate developed such a bad reputation that a popular fable had it that President Grover Cleveland’s wife woke him up in the middle of the night to alert him that there were “robbers in the house.” To that, a sleepy Cleveland replied, “I think you are mistaken. There are no robbers in the House, but there are plenty in the Senate.” Sen. William Frye from Maine wrote to a friend in 1889, “You do not believe that a man should buy a United States Senatorship, nor do I, yet there are several in our distinguished body who hold their seats by purchase.”

Intimidation and bribery marked some of the states' selection of senators. Nine bribery cases were brought before the Senate between 1866 and 1906. In addition, forty-five deadlocks occurred in twenty states between 1891 and 1905, resulting in numerous delays in seating senators. In 1899, problems in electing a senator in Delaware were so acute that the state legislature did not send a senator to Washington for four years.

Gould said the corruption sometimes took on a “comic opera” tone. “For every Lincoln-Douglass debate, you get some more sordid characters where there was talk about legislators being bribed, or being found with women, or being drunk and voting when they’re hung over, all sorts of things.” “There was one case in New York where they were having a Senate election in ‘81 and group of legislators were sent to the wrong room and they looked over the transom and saw one of the candidates with what was called an ‘unspeakable woman' -- that the end of his hopes for being reelected to the Senate,” Gould added.