We spend lifetimes developing community assets, then give them away to a corporation for lifetimes to come 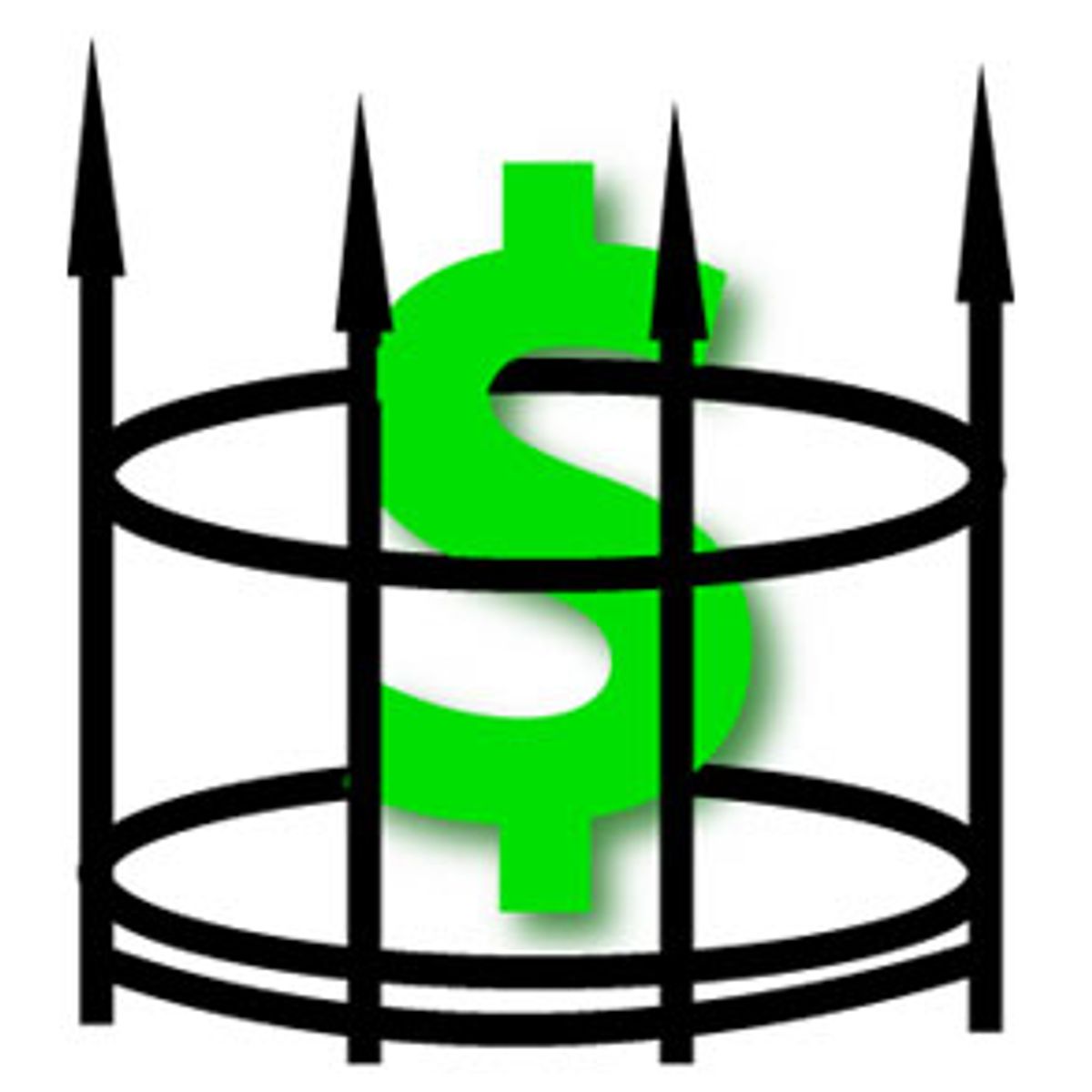 A grand delusion has been planted in the minds of Americans, that privately run systems are more efficient and less costly than those in the public sector. Most of the evidence points the other way. Private initiatives generally produce mediocre or substandard results while experiencing the usual travails of unregulated capitalism -- higher prices, limited services, and lower wages for all but a few 'entrepreneurs.'

With perverse irony, the corruption and incompetence of private industry has actually furthered the cause of privatization, as the collapse of the financial markets has deprived state and local governments of necessary public funding, leading to an even greater call for private development.

As aptly expressed by a finance company chairman in 2008, "Desperate government is our best customer."

The following are a few consequences of this pro-privatization desperation:

1. We spend lifetimes developing community assets, then give them away to a corporation for lifetimes to come.

The infrastructure in our cities has been built up over many years with the sweat and planning of farsighted citizens. Yet the dropoff in tax revenues has prompted careless decisions to balance budgets with big giveaways of public assets that should belong to our children and grandchildren.

In Chicago, the Skyway tollroad was leased to a private company for 99 years, and, in a deal growing in infamy, the management of parking meters was sold to a Morgan Stanley group for 75 years. The proceeds have largely been spent.

The parking meter selloff led to a massive rate increase, while hurting small businesses whose potential customers are unwilling to pay the parking fees. Meanwhile, it has been estimated that the business partnership will make a profit of 80 cents per dollar of revenue, a profit margin larger than that of any of the top 100 companies in the nation.

Indiana has also succumbed to the shiny lure of money up front, selling control of a toll road for 75 years. Tolls have doubled over the first five years of the contract. Indianapolis sold off its parking meters for 50 years, for the bargain up-front price of $32 million.

2. Insanity is repeating the same mistake over and over and expecting different results.

A Stanford University study "reveals in unmistakable terms that, in the aggregate, charter students are not faring as well as their traditional public school counterparts." A Department of Education study found that "On average, charter middle schools that hold lotteries are neither more nor less successful than traditional public schools in improving student achievement, behavior, and school progress."

Our private health care system has failed us. We have by far the most expensive system in the developed world. The cost of common surgeries is anywhere from three to ten times higher in the U.S. than in Great Britain, Canada, France, or Germany.

Studies show that private prisons perform poorly in numerous ways: prevention of intra-prison violence, jail conditions, rehabilitation efforts. The U.S. Department of Justice offered this appraisal: "There is no evidence showing that private prisons will have a dramatic impact on how prisons operate. The promises of 20-percent savings in operational costs have simply not materialized."

A 2009 analysis of water and sewer utilities by Food and Water Watch found that private companies charge up to 80 percent more for water and 100 percent more for sewer services. Various privatization abuses or failures occurred in California, Georgia, Illinois, Indiana, New Jersey, and Rhode Island.

Across industries and occupations, according to the Project on Government Oversight, the federal government paid billions more on private contractors than the amounts needed to pay public employees for the same services.

3. Facts about privatization are hidden from the public.

Experience shows that under certain conditions, with sufficient monitoring and competitionand regulation, privatization can be effective. But too often vital information is kept from the public. The Illinois Public Interest Research Group noted that Chicago's parking meter debacle might have been avoided if the city had followed common-sense principles rather than rushing a no-bid contract through the city council.

Studies by both the Congressional Research Service and the Pepperdine Law Review came to the same conclusion: any attempt at privatization must ensure a means of public accountability. Too often this need is ignored.

In Florida, abuses by the South Florida Preparatory Christian Academy went on for years without regulation or oversight, with hundreds of learning-disabled schoolchildren crammed into strip mall spaces where 20-something 'teachers' showed movies to pass the time.

In Philadelphia, an announcement of a $38 million charter school plan in May turned into a $139 million plan by July.

In Michigan, the low-income community of Muskegon Heights became the first American city to surrender its entire school district to a charter school company. Details of the contract with Mosaica were not available to the public for some time after the deal was made. But data from the Michigan Department of Education revealed that Mosaica performed better than only 13% of the schools in the state of Michigan.

Also in Michigan, an investigation of administrative salaries elicited this response from charter contractor National Heritage Academies: "As a private company, NHA does not provide information on salaries for its employees."

Education writer Danny Weil summarizes the charter school secrecy: "The fact is that most discussions of charters and vouchers are not done through legally mandated public hearings under law, but in back rooms or over expensive dinners, where business elites and Wall Street interests are the shot-callers in a secret parliament of moneyed interests."

Beyond prisons and schools, how many Americans know about the proposal for the privatization of Amtrak, which would, according to West Virginia Representative Nick Rahall, "cripple Main Street by auctioning off Amtrak's assets to Wall Street." Or the proposal to sell off the nation's air traffic control system? Or the sale of federal land in the west? Or the sale of the nation's gold reserves, an idea that an Obama administration official referred to as "one level of crazy away from selling Mount Rushmore"?

4. Privatizers have suggested that teachers and union members are communists.

Part of the grand delusion inflicted on American citizens is that public employees and union workers are greedy good-for-nothings, enjoying benefits that average private sector workers are denied. The implication, of course, is that low-wage jobs with meager benefits should be the standard for all wage-earners.

The myth is propagated through right-wing organizations with roots in the John Birch Society, one of whose founding members was Fred Koch, also the founder of Koch Industries. To them, public schools are socialist or communist. Explained Heartland Institute President Joseph Bast with regard to private school vouchers in 1997, "we have come to the conclusion that they are the only way to dismantle the current socialist regime."

But the facts show, first of all, that government and union workers are not overpaid. According to the Census Bureau, state and local government employees make up 14.5% of the U.S. workforce and receive 14.3% of the total compensation. Union members make up about 12% of the workforce, but their total pay amounts to just 9.5% of adjusted gross income as reported to the IRS.

The facts also strongly suggest that wage stability is fostered by the lower turnover rate and higher incidence of union membership in government. The supportive environment that right-wingers call 'socialism' helps to sustain living wages for millions of families. The private sector, on the other hand, is characterized by severe wage inequality. Whereas the average private sector salary is similar to that of a state or local government worker, the MEDIAN U.S. worker salary is almost $14,000 less, at $26,363. While corporate executives and financial workers (about one-half of 1% of the workforce) make multi-million dollar salaries, millions of private company workers toil as food servers, clerks, medical workers, and domestic help at below-average pay.

Privatized services are structured for profit rather than for the general good. A by-product of the profit motive is that some people will lose out along the way, and parts of the societal structure will fail in order to benefit investors.

This is evident in the privatized prison system, which relies on a decreasing adherence to the law to ensure its own success. Corrections Corporation of America has offered to run the prison system in any state willing to guarantee that jails stay 90% full. "This is where it gets creepy," says Business Insider's Joe Weisenthal, "because as an investor you're pulling for scenarios where more people are put in jail."

The incentive to fail was also apparent in road privatization deals in California and Virginia, where 'non-compete' clauses prevented local municipalities from repairing any roads that might compete with a privatized tollroad. In Virginia, the tollway manager even demanded reimbursement from the state for excessive carpooling, which would cut into its profits.

The list goes on. The Chicago parking meter deal requires compensation if the city wishes to close a street for a parade. The Indiana tollroad deal demanded reimbursement when the state waived tolls for safety reasons during a flood.

Plans to privatize the Post Office have created a massive incentive to fail through the Postal Accountability and Enhancement Act, which requires the USPS to pre-pay the health care benefits of all employees for the next 75 years, even those who aren't born yet. This outlandish requirement is causing a well-run public service to default on its loans for the first time.

Also set up to fail are students enrolled in for-profit colleges, which get up to 90 percent of their revenue from U.S. taxpayers. Less incentive remains for the schools after tuition is received, as evidenced by the fact that more than half of the students enrolled in these colleges in 2008-9 left without a degree or diploma.

And then we have our littler students, set up to fail by private school advocates in Wisconsin who argue that a requirement for playgrounds in new elementary schools "significantly limit[s] parent's educational choice in Milwaukee."

In too many cases, privatization means success for a few and failure for the community being served. Unless success can be defined as a corporate logo carved into the side of Mount Rushmore.

Paul Buchheit teaches economic inequality at DePaul University. He is the founder and developer of the websites UsAgainstGreed.org, PayUpNow.org and RappingHistory.org, and the editor and main author of "American Wars: Illusions and Realities" (Clarity Press). He can be reached at paul@UsAgainstGreed.org.