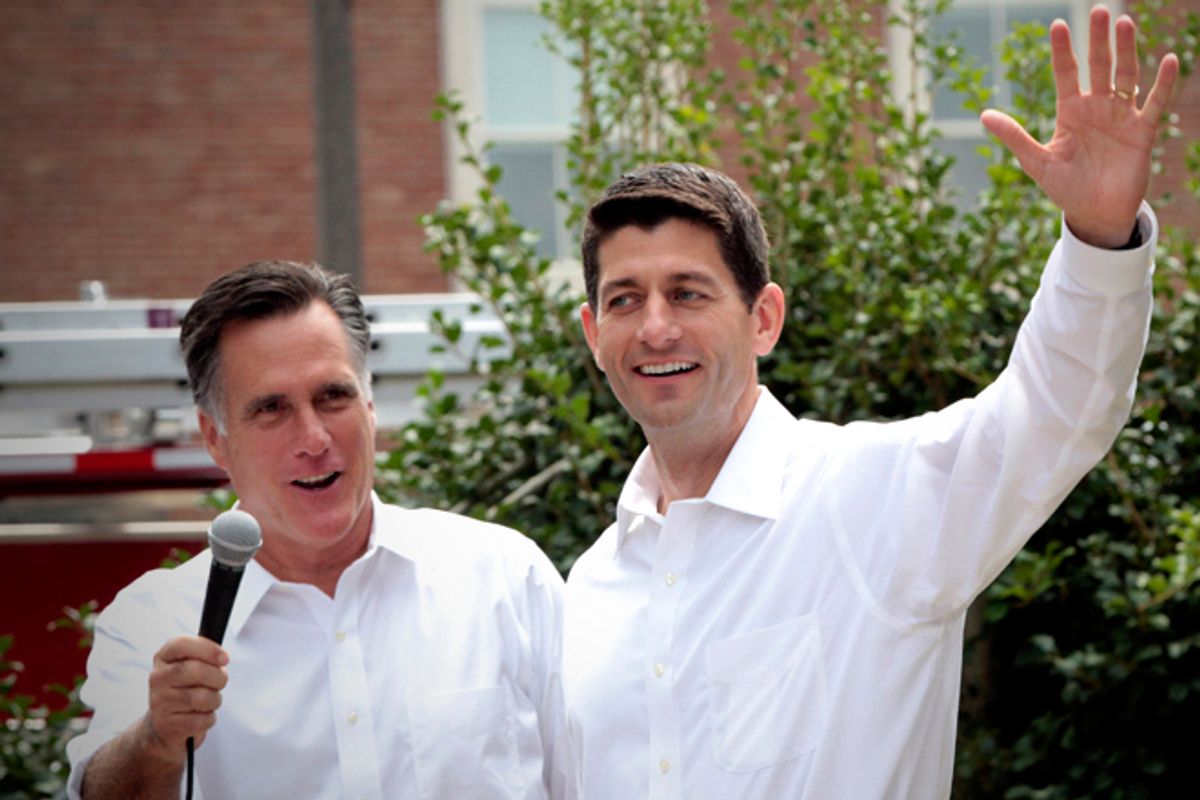 In my rollicking interview with Andrew O'Hehir about my new book, I said that Mitt Romney was "doubling down on whiteness" by picking Paul Ryan as his vice-presidential nominee. A few people, some of them angry, have asked me what I meant. In a conversation with Richard Lui about my comments, on MSNBC's "Jansing and Co.," I called Romney and Ryan "White and Whiter."

Cue the outrage. On Twitter, former Dick Cheney advisor Ron Christie, who happens to be among the 2 percent of Republicans who are black, huffed: "So @joanwalsh can call GOP ticket "White and Whiter" and yet there are crickets in the media. Now how isn't this racist, exactly? #tcot"

Maybe our dreams of racial harmony are coming true: A black man is worried about a white woman being racist toward two wealthy white men.

The usual suspects at NRO and the righty blogosphere had a ragegasm. Dan Foster at NRO tweeted: "Walsh makes 70s Pam Grier look like Angela Lansbury."

I'm blushing; that's so flattering. I love Pam Grier. And it's also crazy-silly-stupid.

The truth is, nobody who reads my book will come away thinking I'm "racist" against whites, whatever psychological and political contortions that would involve. But I am raising a question: What does it mean when nine out of 10 self-identified Republicans are white, according to Gallup polls (it's 89 percent, to be exact)? The country is currently 63 percent "non-Hispanic white." That's kind of shocking. We're not talking about a country club, an exclusive new restaurant, a prep school or a fancy neighborhood. We're talking about one of the two major parties that govern the United States.

My book talks a lot about how that happened. It's complicated – and I certainly don't think it's all or even mainly racism, though racism played a role. (I'll do a few book excerpts on the blog in the days to come.) But I don't think a monochrome GOP is a good thing for the country – or for Republicans, either. When politics gets so racialized, and when racial change gets so starkly politicized, we're going to have a hard time making good on our founding commitment to e pluribus unum: out of many, one. Besides, a party that relies almost exclusively on votes from a group of people whose share of the population is steadily shrinking is on a collision course with demographic extinction. Eventually.

You might think that some leading Republicans would worry about that. And actually, I'm sure some do. Both former Florida Gov. Jeb Bush and the state's GOP Sen. Marco Rubio have criticized their party, and its presumptive presidential nominee, for their fear-mongering around immigration and abandonment of once-bipartisan immigration reforms like the DREAM Act. But at least for now, most leading Republicans seem to believe they can double down on whiteness and win in 2012, and maybe in 2016, too.

Wily Pat Buchanan laid out the strategy in his dystopic last book, "Suicide of a Superpower: Will America Survive to 2025?" The founding father of Nixonland, the man who wrote the playbook on pulling the white working class out of the Democratic Party, Buchanan declared defeat in his book, given the demographic change that's transformed the white Christian nation he loves. But he did offer Republicans a strategy for a few more election cycles, essentially by embracing its status as what he called "the white party." Mainly, it involves working to make sure that the electorate of 2012 looks like the electorate of 2010 – and not at all like the electorate of 2008, when the Obama coalition of young voters, black people, Latinos and Asians, union members and first-time voters elected our first black president.

In 2010, white seniors made up a bigger share of voters, and the proportion of minorities declined for the first time since 1992.  Republicans won because “white America came out to vote, and minorities and the young stayed home," Buchanan wrote, and they'll win again in 2012, and maybe even 2016, if they can do the same thing.

Buchanan has now moved to the sidelines of American political life. Still, maybe it's just coincidence, but it looks like he's writing the GOP playbook again. The party has gone nuts with proposing and passing new barriers to voting. Just this year, Republicans in 38 states proposed legislation that would interfere with voting access, and a dozen states approved new voting restrictions.

And then there's Paul Ryan. I love Wisconsin, I went to high school and college there, I don't denigrate the state when I say that Ryan represents a Middle America, Wonder Bread sort of pick. That's just fact. Romney and the GOP's second most important convention choice, the party's keynote speaker, happens to be the face of the angry white working class id, New Jersey Gov. Chris Christie. The Democrats' keynote, by contrast, is San Antonio Mayor Julian Castro (eight years after it was that remarkable young Illinois politician Barack Obama.)

Sadly, in the new post-Obama world of conservatism, merely noticing that white people are white is a form of racism. I'm not apologizing for calling the GOP ticket "White and Whiter," or saying they're "doubling down on whiteness." I'll be talking about this a lot, in more detail, in the weeks to come.

Here's my conversation with Richard Lui: