In November, activists in Maine hope to make their state the first to legalize gay marriage with a ballot measure 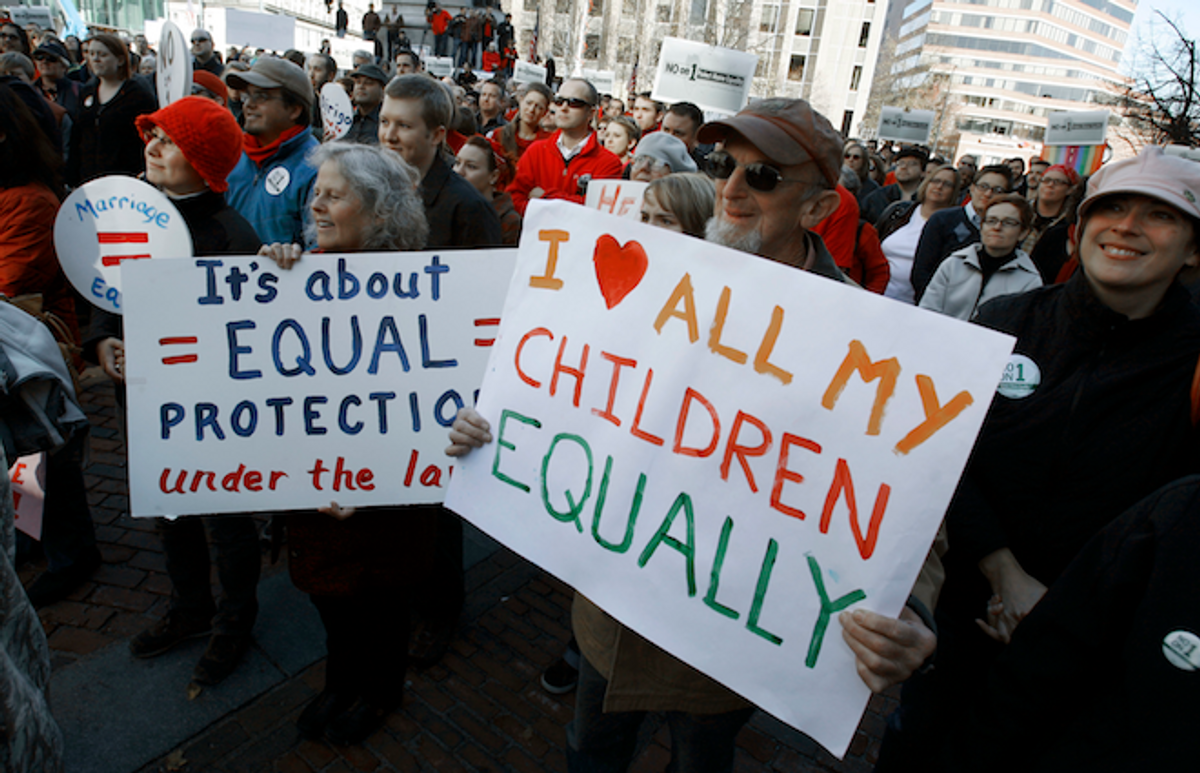 Supporters turn out for a gay-rights rally the day before election day in Portland, Maine, on Monday, Nov. 2, 2009. (AP Photo/Pat Wellenbach)
--

Maine is one of four states with a marriage equality measure on the ballot this year, but unlike every other state that’s ever voted on the issue, this is first time equality advocates are the ones to bring marriage to the ballot. Every other time, it’s been opponents who have put it on the ballot in response to a court decision or legislative action. Every other time, as well, proponents of marriage equality have lost. That's what happened in Maine in 2009, when voters narrowly overturned the country’s first same-sex marriage law to pass the legislature and be signed by the governor. But this year, equality activists are trying again and with a brand new strategy. Matt McTighe, the campaign manager of Mainers United for Marriage, the umbrella group behind the campaign, explains to Salon why they can win this time and how their new approach may serve as a model for other states.

Voters already rejected gay marriage in 2009. What's different this time? Why are you more confident?

The biggest difference is time. We've just had way more time than any state or any other marriage campaign in history to do the one-on-one outreach, to do the targeting and do the research to figure out the best messages and messengers. And I just think that there really has been a shift, not just in Maine, but across the country, on marriage. We're certainly seeing it here, where our polling has consistently shown between 55 and 58 percent support for marriage -- that's way higher than before. If you went back and looked at 2009, our polling showed between 47 and 51 percent at this time, so we've obviously made a lot of progress. I feel as confident as I've ever felt on a campaign of this nature, and I've been involved in marriage campaigns like this going back to 2004.

On top of that, the polling has been echoed in all the conversations we're having. We're seeing these very high levels of persuasion taking place on a day-by-day basis. We've had more than 150,000 conversations with Mainers, and about a week ago we reached a benchmark where we had our 10,000th actual persuasion, by which I mean we talked to somebody who was against us, and after talking to them for an extended period of time and going through all their concerns and arguments, addressing their questions, they came to support it. But not only have we seen a very high persuasion rate over the past two years, we've seen that persuasion hold. We go back to these people months later and we see high durability. That one-on-one touch, that outreach and persuasion, is the centerpiece of our campaign, and it is really what sets us apart from any state going for marriage now or in the past.

Maine is the first state where proponents of equality have been the ones to put marriage on the ballot. In every other state, voters have rejected equality. Why do you think this is the right approach?

The joke I sometimes make when talking to people ... I've been a hockey player all my life, all the way through college, and the old sports cliche is that offense wins games, but defense wins championships. But I was a center, one of the offensive guys, and I would say, well nobody has ever won a championship without scoring any points. At some point you really do need to take the initiative and go on the offensive. It's about going to the voters directly. Because Maine is the first state in history to bring a pro-active citizens initiative to the ballot on marriage. Every other state where marriage has come up, it's always been that it came through the courts and there was a constitutional challenge, or that it passed through the legislature and then there was a fight to overturn it through a peoples' veto.

But that's really just not the right situation to win, which is why I think we've never won at the ballot before. It's just not conducive to giving you the time you need. In other states, you spend all this time working through the legislature. And I know, because I've been a part of those campaigns, how much it takes to get something through the legislature or to prepare for a court case or whatever. So you spend all your resources preparing for that, and then you win, but the next day, opponents go try to overturn it. And you're basically starting from scratch because what it takes to win a campaign in the legislature is totally different from what it takes to run a campaign where you're convincing individual voters. And six to eight months is just not enough time to go to the voters, and that's normally the timeline. That's what happened in Maine in 2009. We came within 30,000 votes, so we did pretty well, but this time we realized that this was going to get settled at the ballot box one way or the other, so we'll take as long as we think it needs to take until we feel confident that we're ready. And we didn't know whether that was going to be 2011, 2012, 2016, and we felt like we were ready. So we've been working for two years now, and we feel very ready.

So, if you're successful, will this be the new model? Should activists just skip the legislature, skip the ballot box, and go straight to the voters?

Well, obviously we'll have to see if we win first. It could turn out that this was a big mistake. I don't think that will be the case. My gut, having been involved in other campaigns, is that this is the better way to go about it. Because it's allowed us to do the work on our terms and to not be on the defensive the whole time. It's certainly an interesting model, and we certainly see a lot of benefits to it. But until it's proven, we don't really know.