Vacuum on the cheap 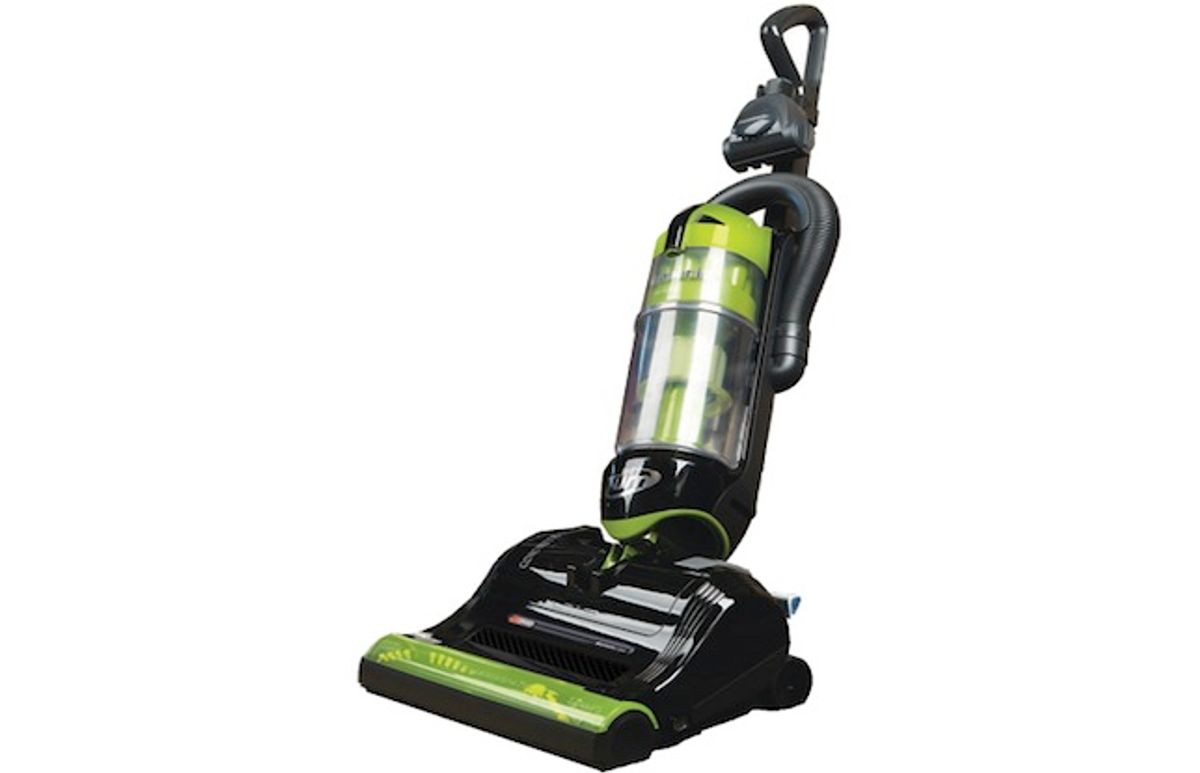 If I were buying a vacuum on a budget, I’d get the Panasonic MC-UL815. At $150, you get features and suction power equal to or better than that of more expensive models.

The key to the Panasonic's abilities is that it has a 12 amp motor and a HEPA filter–things many budget vacuums do not have.

What should someone look for in a budget vacuum or a vacuum in general? Full-size household vacuums (robots excluded) break into two categories: Canisters and uprights. Canisters have a long hose with a suction head. They’re great for getting into corners, but the hose saps power. An upright has a head attached to the body–a layout that is generally better at freeing dirt and sucking it up with power while remaining easy to maneuver around a floor. The best general-use models, budget or not, are uprights. Cordless vacuums are a waste of time too. By relying on a battery, the vacuum loses lots of suction power. You'll want a cord that's at least Look 25 feet long to keep from having to switch it between power outlets all the time, but more is better. For example, the top-end Dyson DC28, our pick for best overall vacuum, has a 35-foot cord.

To clean anything more than your floor, your upright needs attachments like a maneuverable hose that draws its suction power from the main engine to do things like get crumbs off of a couch, clean your stairs or suck up spider webs from a ceiling. A frequent complaint about lightweight uprights is that they tip easily when the hose attachment is being used, so you'll want to find a vacuum that's lightweight–but not so much so that it tips over every time you tug on its hose.

The next decision is to go bagged or bagless. We say go bagless because, at over $4 per bag (using bagged-standard Oreck’s prices as a guide), a sub-$200 vacuum can climb above the budget price range quickly. These vacuums will give you, at best, two full house cleanings per bag. What you gain in the dustless disposal you get from bags, you lose in a having to repeatedly buy bags to stick in your vacuum. The MC-UL815, like most high-end Dysons and other primo vacuums, has an easy-empty dirt cup with enough capacity to last through at least two cleaning cycles.

The MC-UL815 comes with a 12-amp motor, which is standard for any vacuum worth its salt, including aforementioned Dyson DC28, so beware of lower-power seven-amp models. Unlike vacuums with "allergen" filters, dust in the Panasonic goes through a HEPA filtration system, which has much denser micrometer-level filters that are fine enough to trap particles, especially from pets, that irritate those with allergy sensitivities. The MC-UL815's motor-driven turbine brush frees dirt thanks to power flowing directly from the motor — air-powered brushes rotate from the air flow caused by suction, which means that they'll stall on thick carpet. When you come to tile or hardwood, hit a switch, and the agitator disengages to prevent scratching. A crevice tool and dusting brush attach to the auxiliary hose, which extends over seven feet to reach corners and stairs.

Panasonic's MC-UL915 is the updated version of MC-UL815's sister model and the previous Wirecutter pick for a budget vacuum.  According to Reviewed.com, the 815 wins out in "usability," meaning it's easy to turn on and off, steady handling, and comes with an easy-to-empty dirt container. The motor on the MC-UL815 also has more suction in high-pile carpet than the 915 does, thanks to is motor-driven brush, which gives it better cleaning power on high-pile carpet and wood floors than the MC-UL915 can manage. Both models are about equal on low-pile carpet and pet hair. What's more, Panasonic's suggested retail price for the MC-UL915 is $50 more than the MC-UL815, even though you'll find that they're priced similarly on sites like Amazon.

Reviewed gave the MC-UL815 a 7.7/10 overall. For cleaning performance, “The Jet Turn certainly wasn’t the best vacuum we’ve tested on high carpet, but 53% of dirt picked up was a higher percentage than some other high-priced competitors.” As for hardwood floors: “The Panasonic MC-UL815 Jet Turn had great performance on hardwood as it pulled in 87.5% of dirt. Users should ensure, however, that they turn the power brush off before using it on a hardwood or kitchen floor.” Reviewers also found that its suction worked wonders on pet hair: “For pet owners, the Panasonic MC-UL815 Jet Turn would be a worthwhile purchase.” The built-in HEPA filter is great for allergy sufferers, too.

Reveiwed.com also liked the dirt receptacle saying it’s “A breeze to use compared to other dirt containers, users can quickly remove the Panasonic MC-UL815 Jet Turn’s container with the click of a button. Releasing dirt from the container is just as simple; all the user needs to do is push down on bottom button to open its trap door.” At 17 lbs., the vacuum isn’t lithe, but many other models in this category break into the 20-plus lbs. range.

For reliability, Panasonic starts out with an excellent reputation for appliances. Good Housekeeping gave the MC-UL915 (this model's predecessor) a B+ rating, and bestowed several other models in the lineup with the Good Housekeeping Seal. The MC-UL815 also earned a Seal itself, which mean that the magazine gives the product a Consumer Policy, which promises a refund or replacement for defective products within two years of purchase. That means the magazine, not Panasonic, will foot the bill for replacement even a year after the brand’s one-year warranty ends.

The MC-UL815 is a young model, so there is only a smattering of published reviews, but Amazon customers are impressed. One said, “This Panasonic cleans a path with almost perfection,” and another, who had spent three weeks researching before a purchase, said, “ It has tremendous suction. It picked up a lot dirt that my old Oreck passed over.”

Consumer Reports (subscription required) said, “This upright offers impressive cleaning, including top-notch pet-hair pickup, at a reasonable price” and “features include a brush on/off switch, which safeguards bare floors and prevents scattered debris, and a retractable cord.”  The MC-UL815 earned a 62 out of 100 (the highest-scoring model in this price category received a 70), three points more than the MC-UL915.

The MC-UL815 shows its budget status in a couple features. The model features “swivel steering,” which frees the wheels to turn quickly around a corner, but makes vacuuming in a straight line difficult. The vacuum’s power cord, at around 25 feet, is a bit on the short side for uprights. These are minor complaints for a package that ends up being a tremendous value for the price.

There’s plenty of competition in the sub-$200 category, but the few models that can compete with the Panasonic’s value have major drawbacks that’ll inconvenience most users. Reviewers like the $200 Oreck XL Element, an upright bagged model. But that feature doesn’t save cash – an eight pack of bags costs $35, which adds up quickly and pushes this model out of the budget category. Add to that an absence of attachments and the result is a solid floor cleaner that’s overpriced for such narrow applicability.

Another model that gets good marks is the Hoover WindTunnel, but it, as mentioned in the previous post, has been subject to recalls and reliability problems. For a $175 purchase, the quality qualms aren’t worth the price. It also has trouble with any carpet and can’t perform deep cleaning reliably.

Shark's NV352 LiftAway gets high marks in some reviews, but it fails to grab any dirt according to Reviewed.com, which gave it a dismal 3.7/10.

Some reviewers also like the Eureka AirSpeed, but, as mixed Amazon reviews indicate, it leaves dirt behind on hardwood floors. The MC-UL815 gets good, but not top marks from CR but I think that's partially because testers there put an undue priority on carpet pile adjustment.

Unlike the Bissel and Shark models they laud, the Panasonic has an automatic carpet adjuster, which they say is less effective than manual adjusters. The only cons cited by CR for the MC-UL815 were this and the blanket statement that bagless vacuums can be messy to empty. Even so, these criteria separate the Panasonic from the Shark, Bissel and, Eureka by just three points. It's a winning model overall, and cleans better and more reliably than any of the competition.

The Panasonic MC-UL815 has every feature you want in a vacuum and at a knockout price. It’s the vacuum I'd buy.