"The Graves Are Walking": Was the Great Potato Famine a genocide? 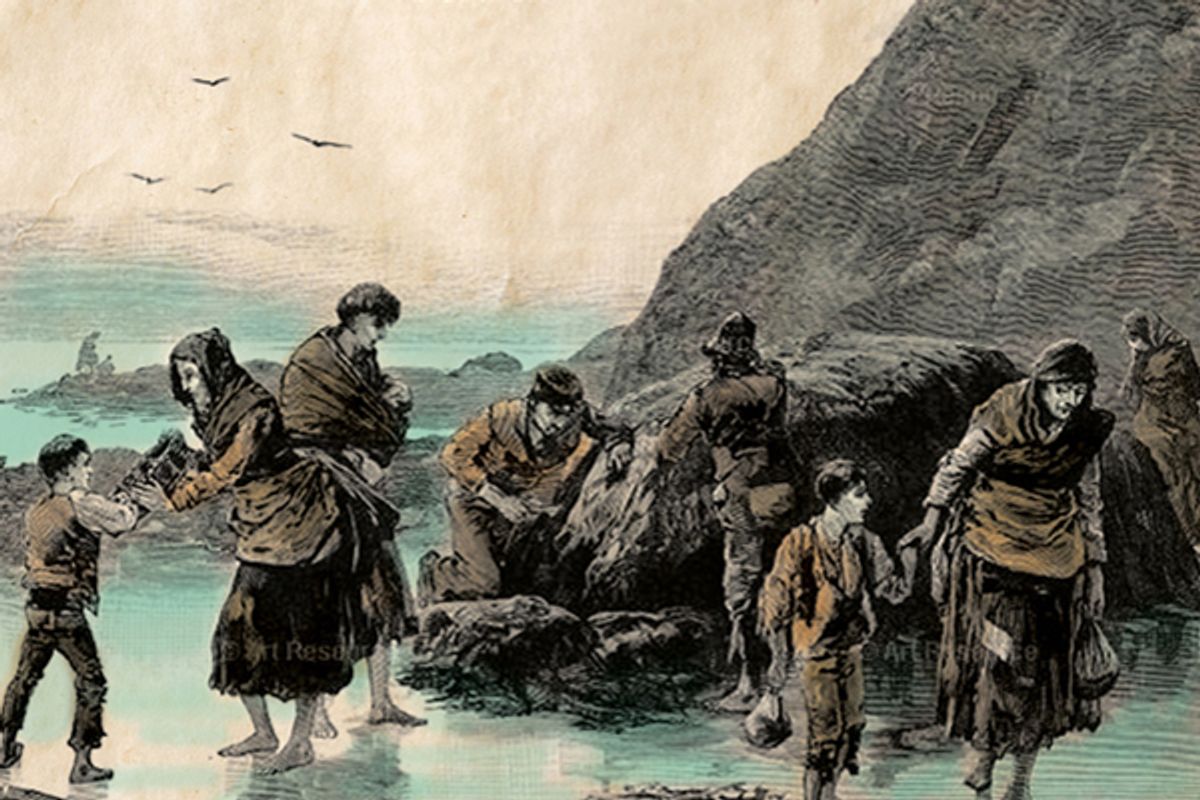 A detail from the cover of "The Graves are Walking"
--

Narrative history is a tricky business, fitting all those recalcitrant facts into the form of communication human beings love best. A good narrative needs a protagonist -- the answer to that shrewd editor's question, "Whose story is this?" -- but it needs an antagonist as well. A villain makes things easy; one of the reasons World War II history remains so popular is that it has an archvillain in Hitler, a genuinely bad person pursuing a wicked agenda justifying himself with evil ideas and attitudes. But the antagonist can also be time, society, change -- even the weather.

So what sort of story is the great Irish potato famine of the late 1840s, a catastrophe that killed a million people, drove over a million more from their homeland and permanently transformed the way the Irish people view themselves? It's a tragedy, obviously, but does it feature an antagonist comparable to Nazi Germany, as some Irish historians have claimed? Or, to use modern geopolitical terminology, was the Great Famine a form of genocide? Calling it that gives the carnage a label commensurate with the trauma Ireland suffered, but history, like justice, seeks more than just emotional truths.

John Kelly, author of the new book "The Graves Are Walking: The Great Famine and the Saga of the Irish People," does not think the famine constituted genocide. Citing an Irish nationalist author who accused Britain's Assistant Treasury Secretary Charles Trevelyan of infecting Irish children with a special "typhus poison" in a government laboratory, he writes that the man "should have stuck to the truth. It was incriminating enough." The story Kelly tells in "The Graves are Walking" is indeed damning, a shameful, bloody blot -- and far from the only one -- on the history of the British Empire. But calling it a genocide, however satisfying that pitch of moral condemnation may be, only acts to obscure the chilling contemporary relevance of Ireland's 19th-century agony.

Kelly, whose previous book, "The Great Mortality," offered an account of the plagues that devastated Europe in the Middle Ages, recounts the progress of the famine chronologically. It began with a mysterious blight that struck the potato crops of Flanders in 1845. The blight, which scientists of the time mistakenly believed to be caused (rather than merely fostered) by damp weather, was a fungus that could destroy a field of plants overnight and turn seemingly healthy potatoes into black, slimy lumps. The blight afflicted England and Scotland as well as Northern Europe, but its effect on Ireland was particularly dire because the economy there was entirely dependent on the labor of peasants whose compensation consisted of permission to cultivate small parcels of land. Potatoes, which grow quickly and are highly nutritious, were the only crop with a high-enough yield per square foot to feed them.

The colonial nature of the Irish economy exacerbated the food shortage. Most of the landowners were Anglo-Irish, and many of these were absentee landlords who really identified as English. (The Duke of Wellington, born in Dublin, reputedly responded to someone who called him Irish by saying, "Being born in a stable does not make one a horse.") They visited their Irish properties infrequently (or never) and regarded them solely as a source of funding for a lifestyle that, as Kelly puts it, showed "a preference for conspicuous consumption over agricultural investment." Whatever the faults of England's own class system, the landed gentry were seen to have a paternalistic obligation to care for their tenants, especially in times of need.

The political, economic and humanitarian failure of England's response to the famine amounted to -- no joke intended -- a game of hot potato between the British government and Irish landowners over who was responsible for aiding the poor. The now archetypal tableau of Irish grain being loaded onto ships bound for England as Ireland's starving masses watched speaks of the landowners' indifference to anything but their own income. The refusal of the British government to act decisively to stem the crisis early on arose from its determination to make Ireland "independent" (if only there were a way to make those scare quotes extra ironic). Both sides were ignorant and shortsighted, confident in their stereotypical notion of the irresponsible, fanciful and lazy "Irish character" but oblivious to all the ways that rural subsistence economies cannot be expected to start functioning like England's more developed agricultural one overnight.

Kelly, like most historians, places the brunt of the responsibility for this fiasco on the shoulders of Trevelyan. As the policy leader of the famine response program, Trevelyan was not a Mengele-style mad scientist but a civil servant known for his "unbending moral rectitude and personal intensity." Unfortunately for the Irish, the faith he embraced was a fusion of Moralism, "an evangelical sect that preached a passionate gospel of self-help" and the laissez-faire economics of Adam Smith and Edmund Burke. At several key points in the evolution of the catastrophe, when strategic intervention might have fended off thousands of deaths, Trevelyan refused, maintaining that there was no greater evil than interfering with market forces. When a subordinate protested, he would send him a copy of Burke's "Thoughts and Details on Scarcity."

The Irish economy was backward and precarious, but for Trevelyan the failure of the potato crop presented not a life-or-death crisis but an opportunity to forcibly modernize it. He agreed to a limited public works program (in which out-of-work laborers were paid a pittance to build roads to nowhere) because he believed it would break the peasant class of its reliance on barter and subsistence farming. The idea was to sell them corn imported from overseas because the grain couldn't be cultivated in Ireland, thereby accustoming them to using money. However, when Ireland's mercantile men objected to the price-depressing effects of government-funded grain, Trevelyan vowed not to sell it too cheaply, claiming that high prices would promote foreign imports.

These strategies amount to the 19th-century version of what Naomi Klein has dubbed the "Shock Doctrine": an attempt to force economic reforms on a population reeling in the aftermath of a disaster. Kelly intersperses the nitty gritty of the shifting Irish economic situation with horrific glimpses of its human toll: streets jammed with gaunt, half-naked wraiths who had sold their clothes for food, families gathered mutely in miserable cottages to die, unburied corpses by the roadside, entire hamlets razed by landlords seeking to evict "dead weight" tenants they'd otherwise have to help. If only these unfortunates could have sought comfort in "Thoughts and Details on Scarcity"!

Recognizing that the British handling of the famine was "parsimonious, short-sighted, grotesquely twisted by religion and ideology" rather than deliberately genocidal is important because while powerful, paranoid, racist madmen like Hitler are relatively rare, our own time is replete with men like Trevelyan. The Moralists saw the famine as a combination of divine judgement on the Irish people and the market working itself out in accordance with God's plan, an equation of brutal capitalism with pseudo-Christian piety that can be just as destructive as outright malevolence. That version of the story may not be as satisfying dramatically and morally as the one with the evil, homicidal Englishman, but it does do what history does best, which is to show us how not to repeat it.