Todd Akin's right about this much: Rape exceptions are wrong. You either believe in bodily autonomy, or you don't 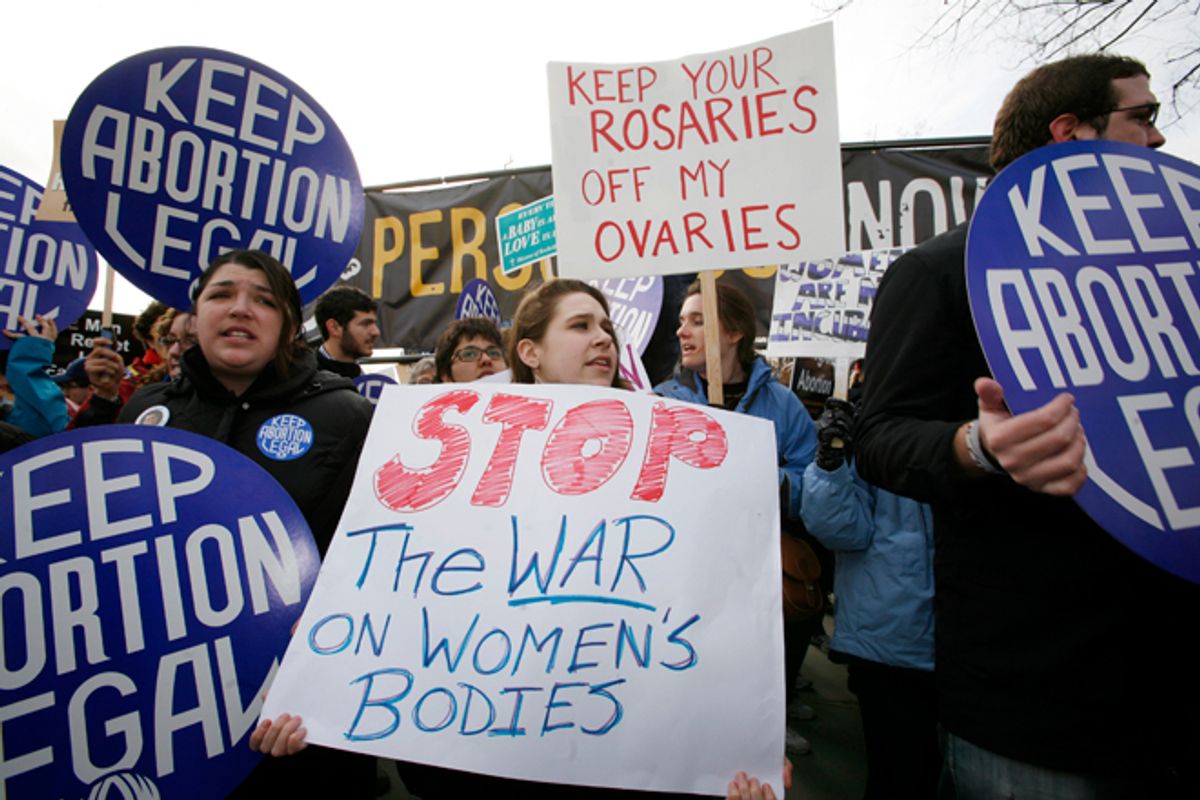 Todd Akin may know nothing about biology, and may have been too honest for his own good about his own contempt for women, but I agree with him on one point: Rape exceptions make no sense. Of course, he thinks that there is no reason, however cruel, to justify the termination of a pregnancy. I think there is no reason that a woman should have to justify to some outside party, including a politician, why she no longer wants to be pregnant.

Akin's comments had so many levels of wrong that it's important to parse them clearly. One, biology: The female body has no known way to distinguish between welcome sperm and unwelcome sperm; if trauma or simple will was enough to end a pregnancy, there'd be no need for abortion. Another, misogyny: The implication that there is "legitimate" rape and there is -- and this is a real phrase conservatives have been using today and for decades -- "consensual rape." By that, they apparently mean the kind that happens to good girls and not lying sluts who enjoy putting their lives before the criminal justice system.

And yet another dimension: Policy, meaning these are not abstract ideas but rather the underlying principles of legislation, including Akin's co-sponsoring a bill to change the definition of rape and his desire to ban the morning-after pill -- a form of birth control -- and all abortions.

But when progressives cede the moral center to the rape exception, they are implicitly buying into the idea that some reasons to have abortions are more justified than others -- and that we should be interrogating these reasons at all. As Tracy Weitz, who conducts empirical research on women who have abortions (remember science?), wrote recently, "In many ways people opposed to abortion in all cases have a more consistent, and I would say, honest position. For them, either a blastocyst, embryo or fetus has a right to life, no matter how it was conceived, or a woman doesn’t have the right to terminate a pregnancy, no matter the circumstances." She calls out commentators, including the very pro-choice Rachel Maddow, for saying that politicians are extreme when they even oppose exceptions for rape and incest. "Unfortunately," Weitz writes, "it is extreme to oppose the right of any woman to make decisions about the direction of her life, no matter the circumstances under which she finds herself pregnant." In other words, either you believe a woman has the right to decide not to be pregnant anymore, or you think you should get a say in her decision.

In the world we live in now, this has very practical considerations. The Hyde Amendment bars federal funding for abortions except in the case of immediate life endangerment, rape or incest. (Despite the best efforts of abortion opponents, some states have less restrictive guidelines.) But as the people who are the last resort for abortion funding have pointed out, that doesn't mean much in practice.

"At least 9,100 abortions each year are attributed to pregnancies that occur because of forced sexual intercourse, according to the Alan Guttmacher Institute," Stephanie Poggi of the National Network of Abortion Funds wrote in 2005. "Yet, the vast majority of states that only cover abortion under the narrow exceptions report zero payments in any given year. In fiscal year 2001, the most recent year for which we have statistics, the number of abortions paid for by both federal and state Medicaid under the narrow exceptions totaled 81." That's mostly because of bureaucratic mismanagement and the significant hurdles for rape victims in a culture where "legitimate rape" is a thing. The end result is that women on Medicaid either carry unwanted pregnancies to term or have later, more expensive and riskier abortions. Similarly, bans on abortion well before viability -- those so-called fetal pain bills that are trying to move up the current gestational limits in defiance of the Supreme Court -- are also considered "extreme" if they don't have rape exceptions. In any case, demanding that women justify their reasons for not remaining pregnant is both philosophically untenable and functionally unworkable.

It's not that I don't understand why people, including pro-choice organizations, like to talk about rape or life endangerment exceptions. They illustrate how incredibly cruel opponents to abortion are, how divorced they are from the difficult and knotty circumstances of real life. And they help people who can't understand what kind of woman has an abortion -- despite that real 1-in-3 statistic -- realize that all kinds of women have abortions, including ones they find sympathetic. Women who have abortions have been so demonized that storytelling helps make that essential empathic leap that so many people are missing. But as Akin shows, once you start haggling over reasons, you're giving up half the fight -- which is that this is about bodily autonomy and respect for women's ability to determine their own lives.