Go ahead, watch the Jennifer Lawrence flick again now that it is on DVD. But pair it with the classic "Naked Prey" 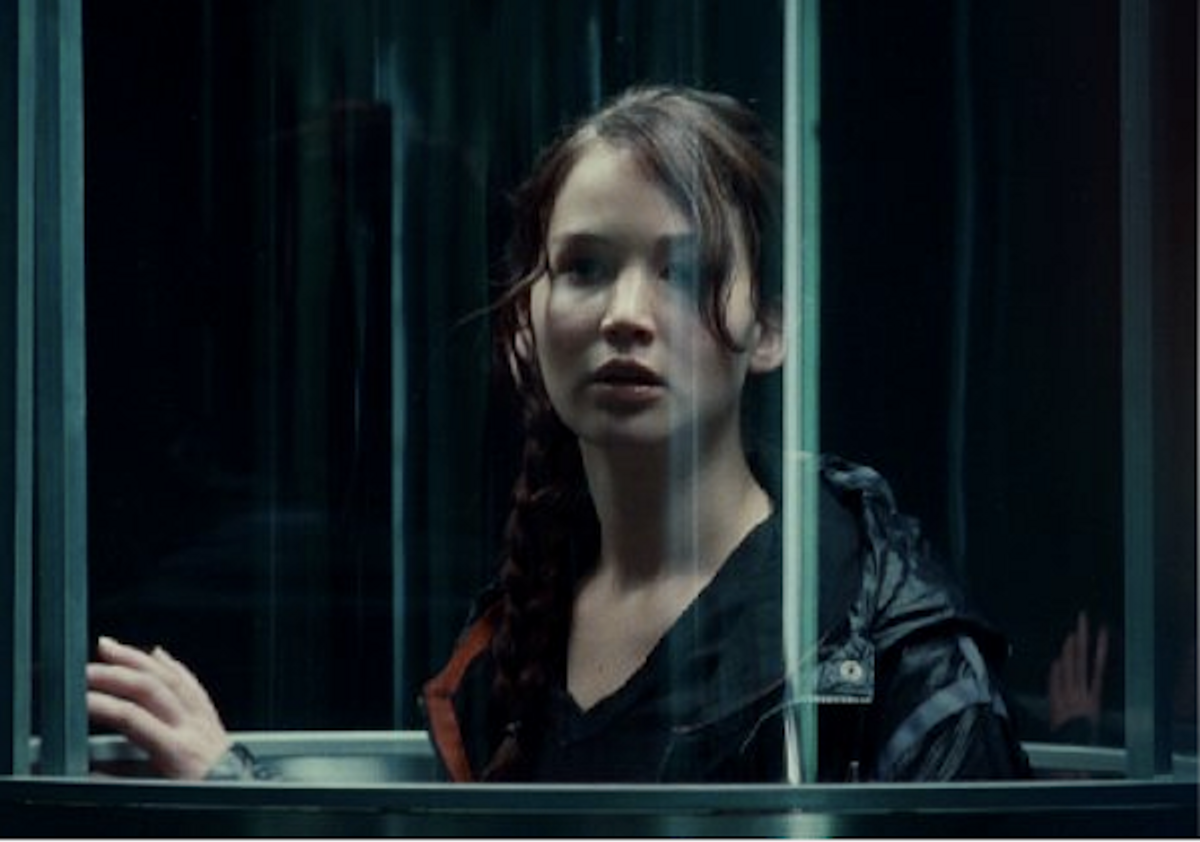 Ever since the release of the 1932 pre-Code classic “The Most Dangerous Game," hunting humans for sport has been one of the world’s oldest movie pastimes. It allows the audiences to have it both ways: to feel superior to the craven fictional thrill-seekers who implement these hunts, and viscerally partake in the same process.

The genesis of the dangerous game that drives “The Hunger Games” is somewhat more complicated. It is the end product of a true cultural Cuisinart. Some point to the Japanese novel and film “Battle Royale”; others to the over-the-top Italian movie “The Tenth Victim,” based on Robert Sheckley’s 1953 short story. Then, there is Shirley Jackson’s “The Lottery” and Richard Dawson’s greatest hit “The Running Man,” or Stephen King’s other futuristic nightmare, “The Long Walk.”

"Hunger Games" author Suzanne Collins freely credits another inspiration, the classical myth of “Theseus and Minotaur.” But if the chronology were more supportive, I’d go with the stated platform of the Romney/Ryan/Rand campaign. Both Collins' book and the film adaptation represent everything the Tea Party hates about Hollywood: skillful left-wing propaganda that shamelessly pushes forward the concept of class warfare while at the same time reducing the ruling elite to stereotypical, cartoon villains.

Power to the propagandists, right on.

But there is one thing that Stephen King, Robert Sheckley and Ayn Rand would all agree on: The story is the thing. Collins tells a great one. The movie version doesn’t work as well as the book, but it definitely gets enough right. In this film, the casting is the thing. Jennifer Lawrence is perfectly typecast as the long-suffering and stoic heroine-turned-killing-machine, Katniss Everdeen. Stanley Tucci inherits the Richard Dawson role, and nails it. Donald Sutherland puts the “elite” in “Elite Ruling Class.”

Gary Ross’ direction is serviceable, with a few too many seasick camera moves and edits, but like Katniss, the movie gets the job done. It’s wet work, though, and once again, the audience is queasily complicit in the blood sport and the mechanics of the Game. The book is written from the point of view of its heroine, but the movie stuffs in more exposition and context – which ironically makes it even more a work of agitprop. The dynamics of oppression that inform the book are more understated here, but the images of the decadent ruling elite, which ignores the groundlings whose blood, sweat and tears enable their decadence, is a potent one. “The Capitol” is an Oz-like wonderland, inhabited only by Bad Witches and their Flying Monkeys, where the masses only exist for their entertainment and continued exploitation.

Collins has said that another one of her inspirations for “Hunger Games” was the televised coverage of the Iraq War. Let’s hope she just watched NBC’s disgracefully jingoistic coverage of the “America, Yeah!” Games -- aka “The Olympics” -- for further insights and inspiration on how propaganda and sports can mix. Like those games and that coverage, the film is overstuffed, filled with spectacle and a cast of thousands. Unconsciously, it bears the weight of our modern times -- populist cinema about the 99 percent, made and marketed by the 1 percent. The revolution will be televised, or, at least, coming to a theater near you in two more installments.

But been there, run that.

As we said, the Human Hunt school of cinema has been around for a long time. One classic in the genre that absolutely nobody has accused “The Hunger Games” of ripping off is Cornel Wilde’s neglected 1966 masterpiece “The Naked Prey.” Here, the component parts of this plot engine are stripped to their literal bare essentials. A Great White Hunter, through no fault of his own, is captured by a savage African tribe. Unlike his not-so-great white hunter companions, who are gruesomely tortured to death before his eyes, he gets a chance. Stripped naked, and given a 100-yard running start from an army of warriors, the chase is on.

And what a chase. For 96 mostly excruciating minutes, Wilde has to outwit, outplay and outlast his pursuers. These are no stereotypical “savages.” They are presented as very refined, very human and very motivated stalkers. Their prey is always one bloody step ahead of them, and as the narrative continues, everyone on-screen begins to wonder if this torture trip is really necessary.

Filmed in South Africa in the height of apartheid, “The Naked Prey” crawls with political subtext. In some ways, the production of “The Naked Prey” was the “Graceland” of its times. And a strictly segregated set did not lead to a segregated film. The leader of the army chasing Wilde is Ken Gampu, a charismatic African actor. The only real humanity shown for most of the film is the complex interactions among the hunters, who mourn their dead, debate tactical strategy and always seem to be weighing the consequences of their actions.

Wilde was a vastly underrated director and a fearless producer. In “The Naked Prey,” he makes some very bold choices. First, there are no subtitles of the scenes with the hunters, scenes he improvised with his (mostly) non-professional cast.  Yet we can follow every nuance of their conversation. The soundtrack was improvised too, by African musicians, a soundtrack now a part of the Smithsonian Institute’s ethnographic collection.

And, mostly notably, the film was shot on location. The stark African landscape informs all of the widescreen action set pieces. Wilde was 54 when he made this movie, and his buff physique is the greatest and only special effect in the movie. Wilde was an Olympic-quality fencer, and like Burt Lancaster, he used his body as a lethal weapon and dynamic prop throughout his career. Also like Lancaster, Wilde broke free of the Hollywood system, and started his own company to produce and direct his own films. One of the few he did not direct, Joseph Lewis’ “The Big Combo,” is one of the greatest film noirs of its era, and Wilde remains one of the great unsung warriors of the independent film world.

“The Naked Prey” may be his masterpiece. There is not a wasted shot, and it functions almost as a classical silent movie. There are some somewhat clumsy insertions of stock footage of African critters eating African critters, but they are used to create a Herzogian dystopia of savage, indifferent nature, with Man (with a capital “M”) whipped along this same merciless path.

Set in the early 1800s, when the slave trade ripped Africa apart, “The Naked Prey” pulls no punches in depicting that savagery. One of the set pieces is a raid on a pastoral African village by Arab slavers, and Wilde’s hero and the movie audience cannot do much more than witness these horrors firsthand. Because of Wilde’s improvisational working methods, this cathartic sequence feels like more of a documentary than a scene from an action movie.

“The Naked Prey” is as much a reaction movie as it is an action one. At the climax, the hero completes his journey, back to civilization. In a wonderful last shot, Wilde salutes Gampu’s noble warrior, who then heads back into the bush and a no-doubt bleak future. And the warrior salutes back. Ken Gampu would bend the rules of the corrupt system of apartheid for the rest of a distinguished career, and sadly, Cornel Wilde would watch his life as an independent filmmaker slowly disintegrate as the '60s ground into the '70s. Wilde was too “old school” to become a ‘70s maverick, but too “independent” to work within what was left of the studio system.

It was a most dangerous game, indeed.

Like “The Hunger Games,” the political context surrounding “The Naked Prey” gives it more resonance for a contemporary viewer, but does not get in the way of straightforward movie magic. The creators of “The Hunger Games” would be aghast if their film was held up as the subversive work of social commentary that it is. Wilde, who died in 1989, would no doubt have been thrilled. It is a pity he never knew that a couple of kids in Minnesota, obsessed with “The Naked Prey,” decided to make their own Super-8 version, starring a neighborhood buddy. This rarely seen classic of backyard cinema, “Zeimers in Zambia,” marked one of the first cinematic collaborations between Joel and Ethan Coen, with Ethan essaying the role of Ken Gampu’s spear carrier.