The feminist group has extended the tradition of The Ramones, The Clash and The Sex Pistols 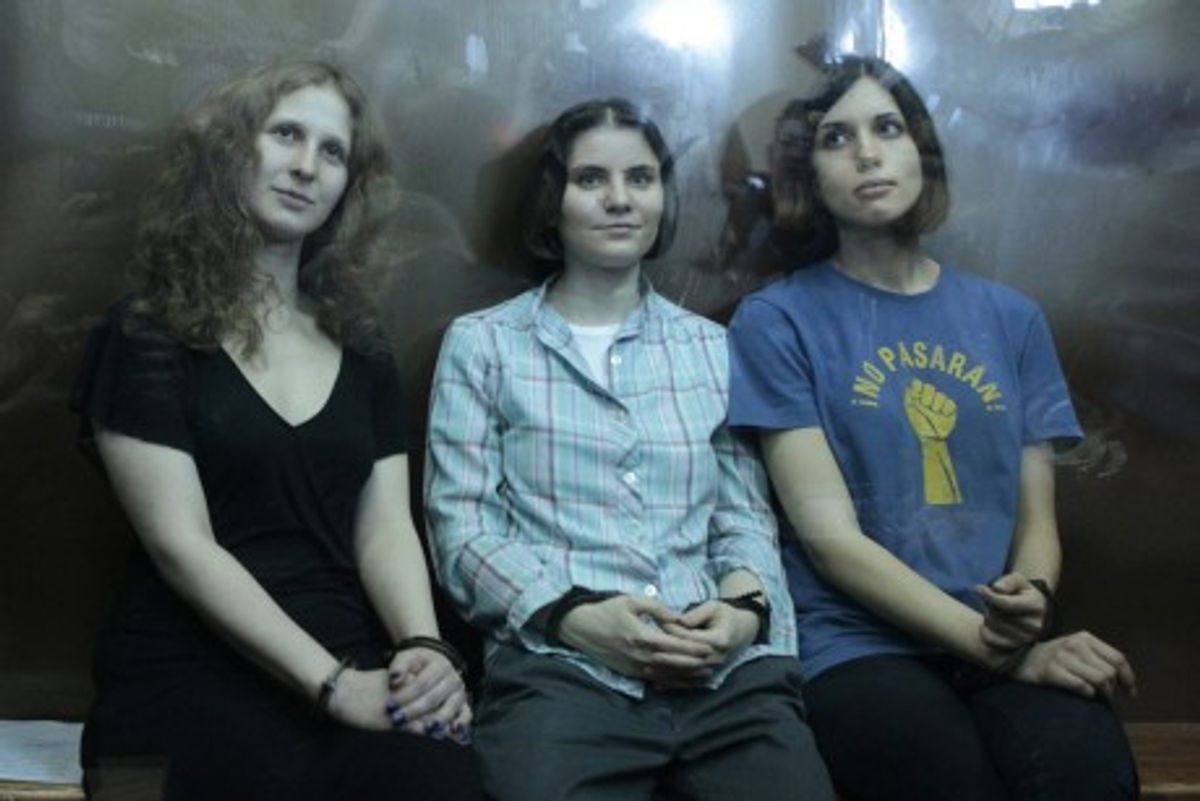 There's a great story from the early days of The Clash.

One day Mick Jones showed up to rehearsal with a song he'd written about his ex-girlfriend titled “I'm So Bored With You.” Joe Strummer liked the tune but decided the world didn't need another song about an ex-girlfriend, so he changed the subject to geopolitics, renamed it “I'm So Bored With the U.S.A.,” and a classic was born.

As with most origin stories, that one is probably at least partly apocryphal, but it gets to the heart of the counterintuitive genius of both The Clash and punk itself. Punk culture is founded on the idea that behaving in a way that's aggressively opposite to what's expected of you is inherently righteous, and its very best manifestations have lived up to that.

The Russian punk band Pussy Riot is one of those very best manifestations.

Last week, three of its members — Nadezhda Tolokonnikova, Yekaterina Samutsevich, and Maria Alyokhina — were sentenced to two years in prison for having the temerity to reveal that Russia's democracy is an emperor without clothes. The official charge against the three young women was “hooliganism,” which sounds like something out of a “Dennis the Menace” comic, and the trial itself was a cartoonish mix of judicial intimidation, religious hypocrisy and rote political thuggery.

For those following from afar, the proceedings were flatly unbelievable — this New Republic piece is a withering blow-by-blow — and the verdict is a naked display of the worst sort of power, a bracing reminder that phrases like “freedom of speech” aren't just slogans for bumper-stickers.

In advance of the verdict, Pussy Riot released a new single titled “Putin Lights Up the Fires.” It's a good song, with pulsing and slashing guitars, an infectious chorus, a gleefully unhinged and awesomely charismatic vocal performance.

Of course, whether or not it's a “good song” is almost beside the point, or at least an added bonus: to make art like that requires such courage and conviction that to critique its aesthetics feels small and deeply unserious. Punk music was forged from the idea that playing music with conviction and purpose is more important than playing it “well,” or perhaps more accurately, a different way of playing it “well.”

Punk was largely an American invention, even if the Brits had a large hand in perfecting it. The Ramones are frequently credited as the “first” punk band, but they had ancestors in the New York Dolls, the Stooges, and the MC5.  The Ramones' legendary 1976 tour of England set the stage for the mythic year of 1977, when the Sex Pistols became the international face of punk and provided an indelible cockney sneer thanks to a small helping of brilliant singles and an enormous helping of brilliant marketing. They cursed on live television, crashed the Queen's Jubilee, and by early 1978 had self-destructed. Their final gig ended with Johnny Rotten's famously ambiguous taunt: “Ever get the feeling you've been cheated?”

The great fiasco of the Sex Pistols left punk with a reputation as rooted in cynicism and contempt, but in reality nothing could have been further from the case. For all their indifferent black-leather affectation, the Ramones's music was wildly, impossibly romantic, infused with a militant commitment to returning rock and roll to a prelapsarian purity. “I Wanna Be Your Boyfriend,” from the Ramones' 1976 debut, is a sparkling and perfect love song, the kind that comes from growing up hearing the Crystals' “And Then He Kissed Me” on the radio and steadfastly believing every word. The Clash took that romanticism and gave it a politics: for all the people who've paid lip service to the possibility that rock and roll could change the world, it was the first band to imagine that possibility into an obligation. The Clash made music to be loved that made you better for loving it: it's hard to imagine anything less cynical.

Pussy Riot is inspiring and important and astoundingly great because they're extending that tradition into a context that matters. For all the august legacies of the Ramones, The Clash and even the Sex Pistols, they plied their trade in countries in which one wasn’t likely to do time for criticizing the government. “God Save the Queen” may have been banned from the BBC, but that's a far cry from Johnny Rotten going to jail for it. And it's inspiring that the members are women, a stirring reminder of the rich and often under-acknowledged feminist tradition of punk and its assorted progeny, from Patti Smith to Chrissy Hynde to Kim Deal to the massively influential Riot Grrrl movement of the 1990s.

Pussy Riot has also transcended the genre in the best sense: Tolokonnikova, Samutsevich and Alyokhina have received support from the likes of Paul McCartney, Madonna and Sting, three artists that punk could loudly care less about, but whose voices carry awfully far. They've done all that by making us still want to believe that rock and roll music can change the world and that cherishing and protecting people who act on that belief is an obligation that exceeds the most rabid fandom. It's a shame, an outrage and a screaming injustice that “Free Pussy Riot” continues to mean something, but it's our obligation to make sure that it does.