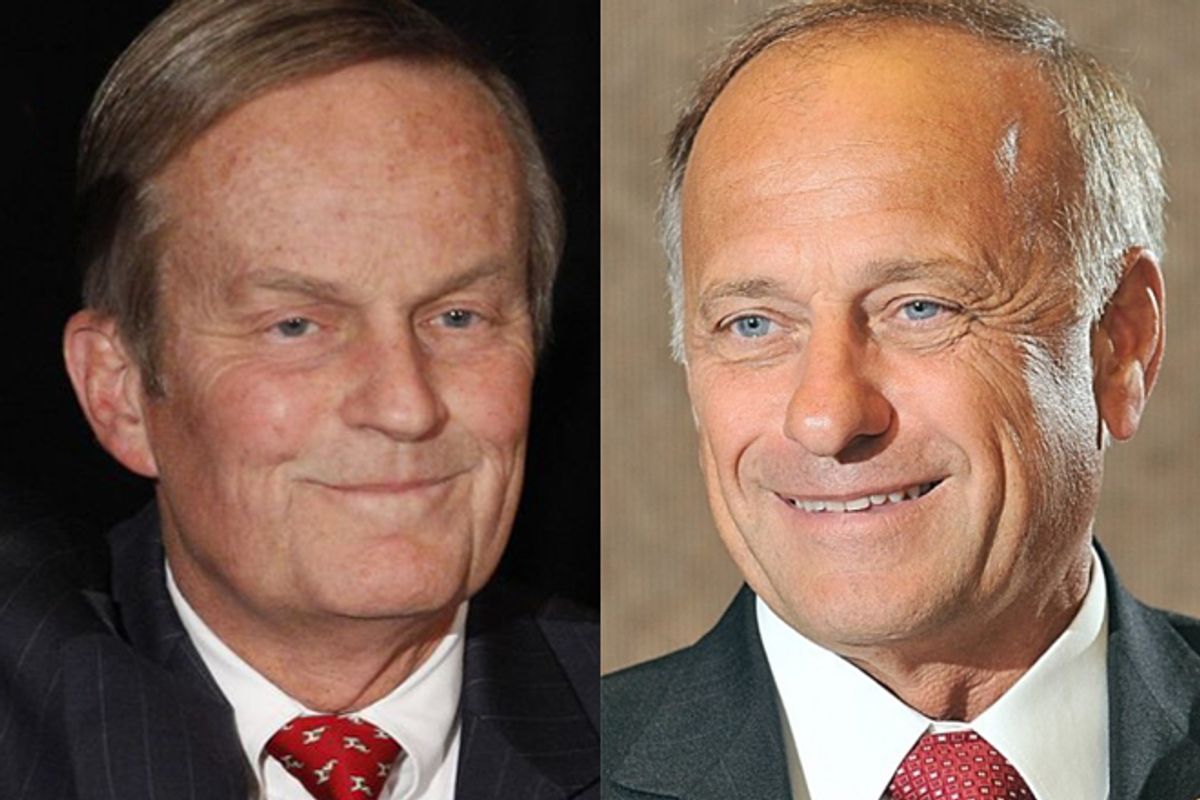 The ever quotable Rep. Steve King became one of the only conservative leaders to lend credence to Rep. Todd Akin’s explosive comments on rape and abortion yesterday when he told an Iowa TV station that he hasn’t heard of someone getting pregnant from rape or incest. “Well, I just haven’t heard of that being a circumstance that’s been brought to me in any personal way, and I’d be open to discussion about that subject matter,” King told KMEG-TV yesterday in comments first flagged by TPM. King even suggested that pregnancies are rare or nonexistent in cases of statutory rape, even though that’s clearly not true.

When King was first asked about Akin’s comments at a town hall in Le Mars, Iowa, yesterday, he was more circumspect. Though he refused to condemn Akin, he didn’t support him either, saying he needed to review the Senate candidate's original statement before offering a public opinion. Apparently King has now made up his mind.

Christie Vilsack, King’s Democratic opponent, told Salon in an interview this morning that King “should have condemned” and “should have distanced himself from” Akin. “I get friendship. It’s really important to stand by your friends, regardless of what they do or say, and he can do that privately, but publicly, he needs to make it very clear what his thoughts are on these very important issues,” Vilsack said. King endorsed Akin in Missouri’s Senate race, saying “my circuit lit up” when he met Akin for the first time.

“To make rash statements like that, certainly things no doctor would ever say, I do think congressman King needs to make it clear where he stands on issues of rape -- how he understands the definition,” said Vilsack, referring to a bill King co-sponsored along with Akin and Rep. Paul Ryan to redefine rape under federal law. “I think he needs to make it clear how he feels about abortion in terms of incest and in terms of life of the mother and in terms of rape,” Vilsack added.