Todd Akin: The man who said too much 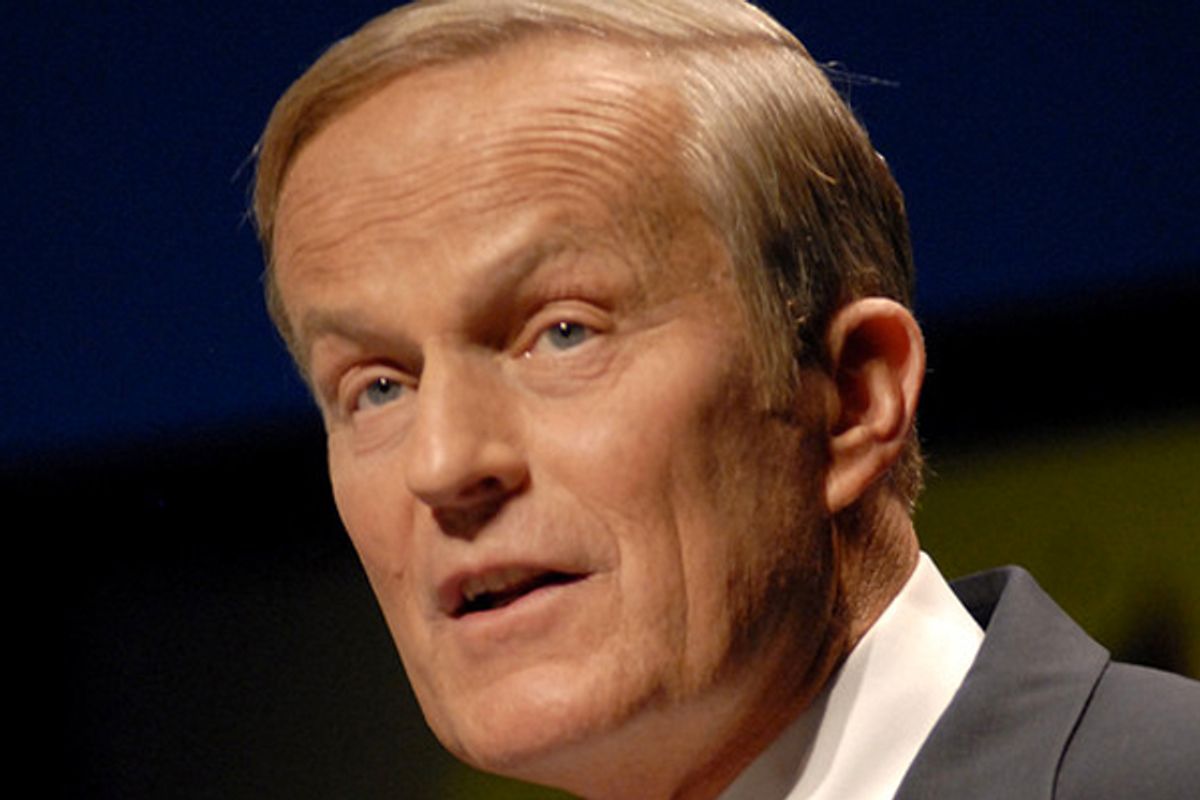 When Missouri’s Republican candidate for the Senate said that “legitimate rape” rarely causes pregnancy, not only was Todd Akin echoing the extreme antiabortion positions held by many in his party, he was exemplifying the creeping extremism within the Republican Party on women’s issues and far more.  In the new, extremist Republican Party, Akin is not an aberration.  He is merely the latest canary in a coal mine of crazy.

Along with Republican vice-presidential candidate Paul Ryan, Akin was an original co-sponsor of the “No Taxpayer Funding for Abortion Act” — which, originally, narrowed the federal definition of rape to restrict the ability of women and girls to use Medicaid dollars and tax-exempt health spending accounts to terminate pregnancies resulting from rape. Akin has since said he “misspoke” in his “legitimate rape” remarks, but the legislation he and Paul Ryan sponsored similarly relabeled rape as “forcible rape” — creepily suggesting there are other, more acceptable versions. What’s more creepy? These are not fringe opinions expressed by powerless lunatics at teeny right-wing organizations. These are the opinions of over 200 Republican members of Congress, one of whom is the party’s candidate for the United States Senate in Missouri and one of whom is the party’s candidate for vice president.

And yet while Republicans continue to bash Bill Maher as though the outlandish comedian were some talisman for the Democratic mainstream, Republicans are rushing to paint a Republican candidate for the United States Senate as a fringe outsider from the party mainstream. If only we could be so lucky. While Akin and others were making increasingly extremist statements about rape and proposing crackdowns on women’s reproductive freedoms, Republican leaders were wading into whack-a-doodle territory with other far-right, extreme positions.

Paul Ryan has advocated handing over Social Security to Wall Street. Before Social Security, one in three elder Americans lived in poverty. Now, instead of preserving our sacred pact to help seniors age with dignity, Paul Ryan wants to give the money we all pay in Social Security taxes over to Wall Street. Had Ryan’s plan been enacted before the financial crash of 2007-2008, Social Security would be thoroughly bankrupt and today’s seniors thrust back into poverty. Ryan’s plan is so extreme even President George W. Bush distanced himself from it. But while the rightward lean of the GOP was shocking enough four years ago, the party has rapidly shifted even further to the right — to the point where extremist Paul Ryan is now its star.

By the same token, a plan to turn Medicare into a voucher system and cut non-defense discretionary government spending by a severe 91 percent — all for the purpose of giving even more tax breaks to millionaires and billionaires above and beyond the historically enormous Bush tax cuts for the rich — might have once seemed like a secret fantasy document locked in a dark cabinet of the Heritage Foundation. But this is the substance of Paul Ryan’s budget plan, voted for by all but 10 Republican members of the House of Representatives. Of the once-extremist anti-government, anti-tax advocate, President George H. W. Bush recently asked, “Who the hell is Grover Norquist, anyway?” Today, Paul Ryan’s radical, scorched-earth budget against the vast majority of government spending is better than Norquist could have dreamed.

I suppose kudos is owed to the Tea Party and its far-right forebears for achieving this shift while simultaneously distracting the public by labeling President Obama’s milquetoast moderate policies as evidence of wanton socialism. The right wing sure knows how to infiltrate and infect the political mainstream while pointing fingers elsewhere. But for crying out loud, what the hell is happening to our country? We now have a party with elected leaders who think child labor laws are unconstitutional (Republican Sen. Mike Lee of Utah), who would repeal the Civil Rights Act (Republican Sen. Rand Paul of Kentucky), who think climate change is “the greatest hoax ever perpetrated on the American people” (Republican Sen. James Inhofe). The rightward tilt of the Republican Party has been so swift and so extreme that, today, not only do both Bushes and Ronald Reagan look too liberal, but frankly so do John McCain and Mitt Romney (which is why Mitt Romney pandered to the extreme conservative base by picking Paul Ryan as his running mate).

Sadly, in an era where "Dancing With the Stars" gets more attention than political debates (let alone reporting), Republicans can effectively disguise their dark intentions with distractions — whether irresponsible saber rattling with Iran or trivial commentary about Paul Ryan’s good looks. But the right-wing ideologues are getting sloppy and boastful — overconfident in their overreach. We all know that Republican efforts to restrict voting rights have nothing to do with addressing the infinitesimal instances of alleged voter fraud and everything to do with suppressing Democratic voting blocs and manipulating elections. But now Republicans like Mike Turzai, the Republican leader of the Pennsylvania state House, can openly brag about his party’s “voter ID” law helping win the state for Mitt Romney. And Republican National Committee Chairman Reince Priebus can shout about how letting everyone in Ohio vote early “waters down the voting privileges of our military men and women” who were previously the only ones allowed to vote early. Priebus didn’t back down from this statement, he doubled down. It says a lot about the Republican mind-set (did voting rights for black people and women “water down” the votes of white men?) but also speaks volumes about what is now acceptable discourse in the GOP.  What was once whispered is now hollered. It should make all of us want to scream.

Today’s Republican Party is pushing a dangerous agenda that is becoming more extreme and ugly by the minute, an agenda that is seeping out despite attempted distractions of finger-pointing, fear-mongering and lies. Todd Akin can call his insulting and backward remarks a mistake as much as he wants and Republicans can flail their gums in outrage, but the fact is, Akin falls squarely in the mainstream of the extremist GOP.