I got pregnant from rape

Todd Akin doesn't know the first thing about what it's like to live with sexual assault. At 19, I found out 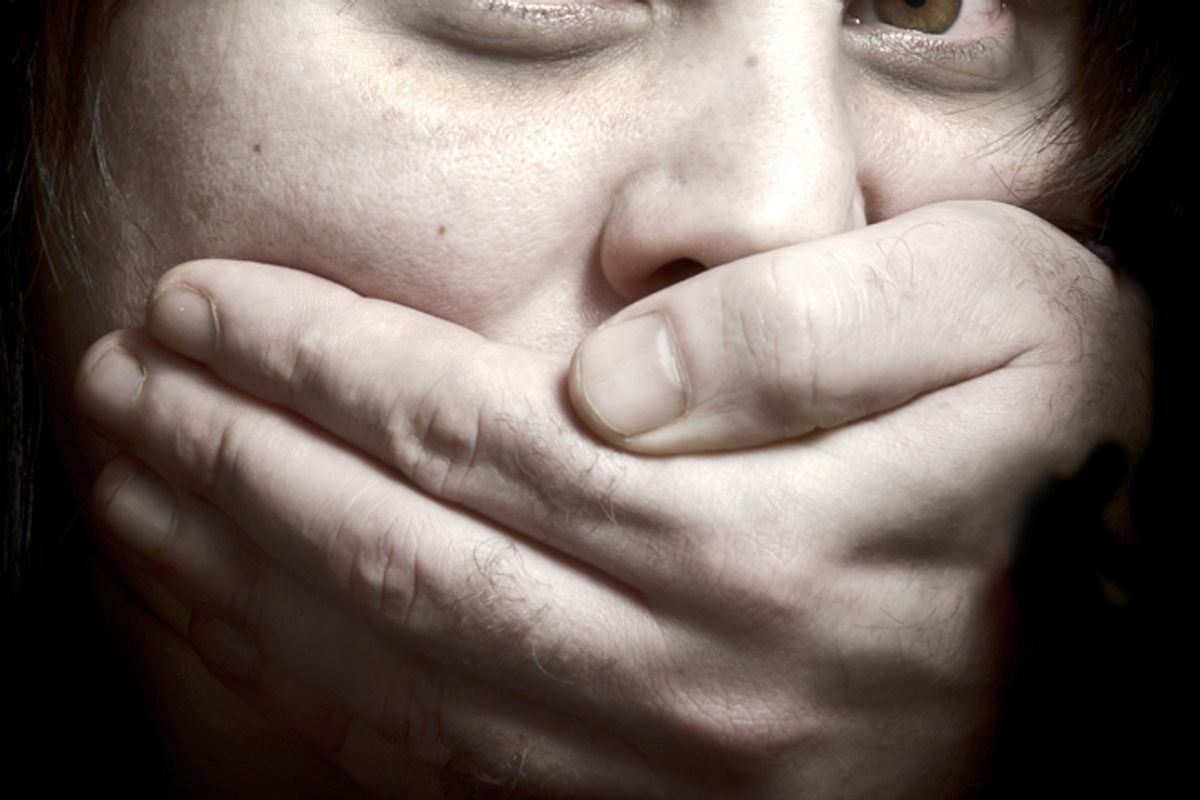 At 19 years old, I became an unwilling expert on the topic of rape. I learned about rape’s savagery and its psychological trauma.

Lately, we’ve been hearing from men who don’t know much about the subject at all. On Monday, Senate candidate Rep. Todd Akin, R-Mo., created a stir when he said, “If it's a legitimate rape, the female body has ways to try to shut that whole thing down." But his casual, off-the-cuff ignorance is just the latest in a long line of insults. In March, Kansas Rep. Pete DeGraf said, “Women should plan ahead for rape the way he keeps a spare tire.” A few weeks after that Indiana state Rep. Eric Turner said, “Some women might fake being raped in order to get free abortions.” I can’t stand by and watch these men who have no personal experience with sexual assault pretend to know so much about it.

I do know about rape. I received an education of the highest degree, and now it’s my turn to teach.

My story begins during an overnight at my best friend’s camp on a lake in Central New York. I rode to the camp with my best friend and her husband, who was in the Navy and home on leave.  When we got there, she told me I could have the best bedroom upstairs since everyone else was sleeping on the first floor. Feeling special, I unpacked my belongings in the secluded little room at the end of the hall. That night, I was the first to go to bed.

Sound asleep, I awoke in the middle of the night to the force of a cold, calloused hand across my mouth. It was my best friend’s husband. He was a big guy, and I was frozen with fear and intimidation; I could not move a muscle.  Everything seemed to be happening in slow motion. My eyes were screaming at him: Why are you doing this to me? But my voice was silent. His hand clamped over my mouth had stopped the flow of words. I wondered what I had done to make this happen, to make my best friend’s husband want to hurt me?

Then I realized he wasn’t alone. I saw the second face in the darkness -- another friend I had known all my life was now on top of me. The pain began shooting through my body as he tore off my underwear. It felt like everything stopped in that moment, mentally and physically. My breathing stopped. The blood in my veins stopped flowing.

I realize now that this was just the beginning of what it is like to be raped.  My old life was gone, over.  Now, I walked into darkness shackled to a completely different existence, one I could never have imagined.

After that night, my mind turned against me. Poisonous thoughts seeped into every crevice and I had nightmares of faceless strangers chasing me every night in my dreams. I did not trust anyone. I blamed myself. I believed that I would never be able to cleanse the filth off my body. I never pressed charges, because at 19 years old (and this was 30 years ago), I wasn't even sure if this was legally a crime, since I knew the men who raped me.

But just when I thought the horror couldn’t escalate any further, things got worse: My period never came. At first, I assumed it was due to the stress and anxiety, so I waited. I waited and waited, and fear swarmed in my mind.

Eight weeks after I was raped, Planned Parenthood gave me the confirmation: I was pregnant. The woman who worked there tried to tell me about my options, but I ran. I threw up in the parking lot. I drove around for hours praying this was all a dream.

Any chance to remotely reclaim who I was disappeared in that moment. My whole worldview was challenged. I’m a Catholic, and I didn’t understand: How could this happen to me?  I was innocent. I did nothing wrong. But I was overwhelmed by fear, guilt and shame.  Just when I thought I might be able to push the ugliness of this savage act out of my mind, I realized I would never be able to escape. It would not let me go.

I was mentally, emotionally and spiritually broken, and the thought of what had resulted from this vile act took my self-hatred into another dimension. I wanted no memory of that night, would do anything possible to erase it in the hope that it would somehow ease the sick, disgusting feeling I got every time I looked in the mirror. I realized that in order to maintain what little sanity I had left, I had to terminate the pregnancy.

Six months after the rape, I dropped out of college and developed an eating disorder. I collapsed into alcohol abuse and had abusive relationships.  It took me 12 years of trying to kill myself before I could actually verbalize to a trusted counselor what happened to me.  I spent the next eight years trying to reverse the damage that was done.

Twenty years of serving time for a crime I didn’t commit.

Rep. Akin and those who argue about “legitimate” rape, you have no idea what you are talking about. You don’t know what it is like to have your sacredness ripped away, ferociously taken without your permission. A pregnancy resulting from rape is a reminder of violence, hatred and brutality forced upon your body. And to tell a woman who has gone through the horror of being raped – which can and does, in fact, result in pregnancy – that she again does not have the power or control to decide what happens to her body afterward is an outrage of epic proportions.

I have learned to speak up about my experience, to never again be silenced. But unfortunately, I can’t stop men who are not experts from spouting off on things they don’t know. I wish they would. I’m tired of people on news show and running for political office offering their opinions on rape and what a woman should do about it.

The only individual who should be able to make this choice is the woman who was raped.  End of story.

Renee DeVesty lectures frequently on college campuses across the Northeast and is a Registered Speaker’s Bureau Member of RAINN, the Rape, Abuse & Incest National Network, and the Founder/Executive Producer of the Clean Slate Diaries, Events of Empowerment for survivors of Sexual Abuse & Domestic Violence.