The GOP: Party of quacks

How the antiabortion movement taught the Republican Party to hate science 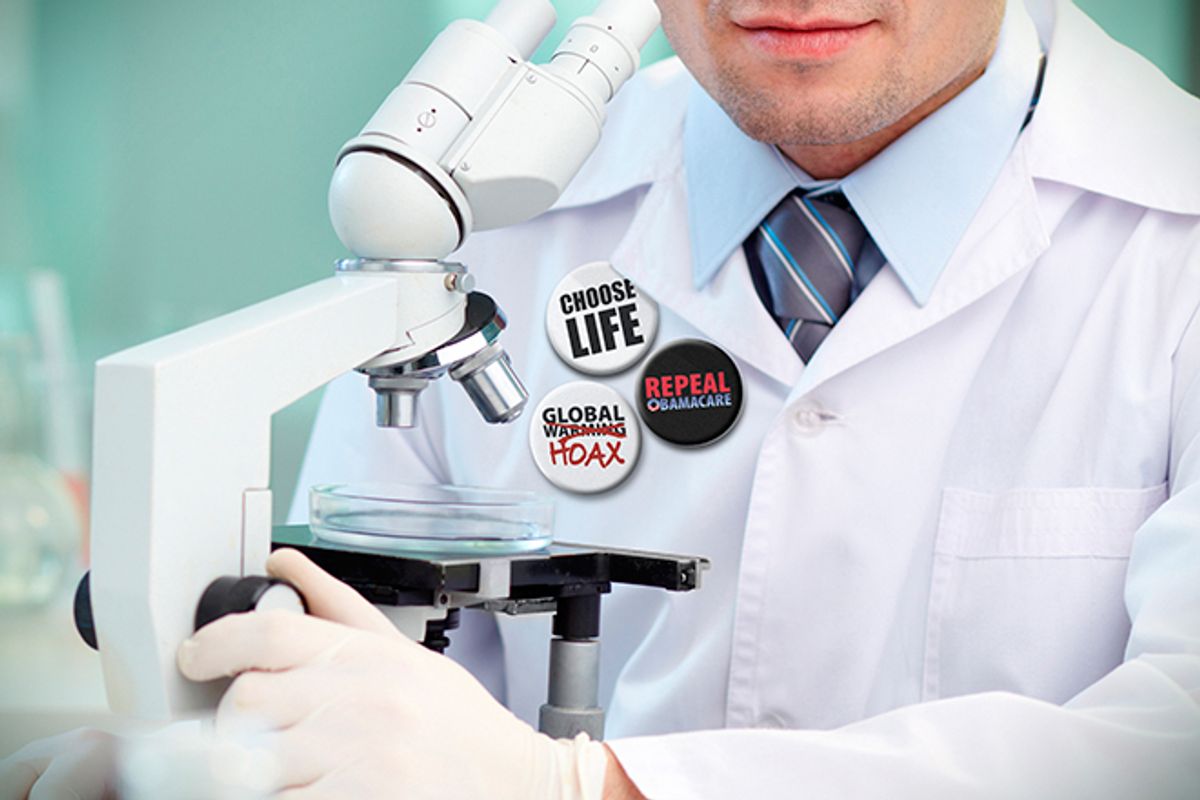 Out of the various layers of falsehoods contained in Todd Akin’s now-notorious claim that “legitimate rape” cannot end in pregnancy, one that caused many eyebrows to raise the highest was his contention that “doctors” had told him that the female body has a way to prevent pregnancy from rape through a vague mechanism he described as “shut that whole thing down.” Surely no actual doctor would say such a thing, many of us thought. But we underestimated the right’s devotion to creating their own set of “facts,” backed up by their own “experts.” Just as conservatives have been able to pay handsomely for people with impressive-sounding credentials to spread lies about everything from global warming to weapons of mass destruction in Iraq, so have they been able to build up their own little empire of medical doctors who will say any fool thing about women’s bodies and pass it off as science.

If anything, the anti-choice movement was instrumental in shaping the conservative approach to science. Anti-choicers were among the first to realize that if the experts and the evidence counter your beliefs, you can simply make up your own claims and put them in the mouths of well-credentialed people. It’s just as good as the truth! Better, even, because it can be endlessly manipulated to meet new ideological goals.

The belief that rape induces unspecified contraceptive properties appears to have taken hold in the anti-choice movement after being promoted by Dr. Jack Willke, who claimed in 1971 that “assault rape” prevents pregnancy, because the assault makes the body unwelcoming to pregnancy. He continues to stand by this belief, including the “assault rape” language, demonstrating that there’s nothing new about the conservative tendency to insinuate that the victims bear the responsibility for the majority of rapes.

Willke cannot be regarded as a marginal or fringe character in the anti-choice movement. He was the president of the U.S. National Right to Life Committee and heralded by Mitt Romney’s campaign in 2007 as “a man who has meant so much to the pro-life movement in our country.” He’s written a number of books on sex and abortion, and really can be understood as an early adopter of the conservative school of disregarding inconvenient facts and passing off wishful thinking as if it were facts.

A website chronicling some of Willke’s writings under “Abortion: Questions and Answers” is a wonderland of lies and misinformation, starting with the claim that no state in the history of the world has ever permitted abortion prior to Roe v. Wade, even though abortion was largely legal in this country prior to the mid-19th century. He dramatically overstates the dangers of abortion, even going so far as to claim that women who get abortions run a strong chance of contracting hepatitis or HIV, or  becoming sterile. He also opines that a prior abortion should make young women ineligible for marriage, because of all the supposed damage it does to her body, presumably making her an inadequate vessel to grow her husband’s heirs.

This strategy among anti-choicers of simply telling lies about how sex and reproduction works has been built into the movement from the beginning and continues to be one of its primary strategies. Anti-choicers continue to insist, despite the evidence to the contrary, that abortion causes breast cancer and suicide, and politicians have gone as far as forcing doctors to tell these lies to patients seeking abortions. Just this week, the ACLU had to sue a California school district for promoting hoary Christian right myths like “kissing spreads HIV” and recommending “plenty of rest” instead of condoms to prevent STDs. The Bush administration showed much love for the “making crap up” school of anti-choice medical science, by appointing Eric Keroack as deputy assistant secretary for population affairs at the Department of Health and Human Services, even though Keroack promoted the belief that women who have multiple sexual partners are physically incapable of feeling love for their husbands or children.

Long before the larger Republican war on science, in other words, the anti-choice movement realized that by simply lying with a lot of footnotes, you could convince audiences who want to believe that any fool thing was scientific fact. Indeed, the anti-choice movement has functioned as a testing ground in many ways for various political strategies that go on to be adopted broadly among conservatives. They were among the first to realize that simply rebranding themselves with a nice-sounding name like “pro-life” could do a lot to cover their misogynist, sex-phobic roots. Since then, the strategy of misleading language has become central to the conservative mission, as we see with misleading phrases from “death panels” to “supporting traditional marriage.” They were among the first conservative movements to appropriate the imagery of the opposition, as well, claiming to be the heirs of the anti-slavery and civil rights movement while actively fighting to deprive women of basic civil rights.

Back in 1980, feminist writer Ellen Willis saw exactly how much the antiabortion movement really had become the leading edge of the larger conservative movement. She wrote at the time:

The antiabortion movement is the most dangerous political force in the country. I believe -- and in saying this I intend no hyperbole whatsoever -- that it is the cutting edge of neo-fascism, a threat not only to women's rights and to everyone's sexual freedom and privacy but to freedom of religion and civil liberties in general.

The subsequent years have demonstrated she was right in her suspicion that anti-choicers are the “cutting edge,” and where they go the rest of the movement would follow. Akin’s misinformation about the functions of the female body stems from a long history of anti-choice activists' making up lies in order to stoke hysteria about women’s sexuality. Of course anti-choicers simply make up their own science when the actual facts don’t suit their purposes. They’re not just part of a larger conservative push to throw off the chains of “reality-based” thinking. When it comes to making up fake facts to support their positions, they’re the original gangsters.