As Brazil, China and India grow, cars follow -- and so does traffic. Are we doomed to nightmare commutes? 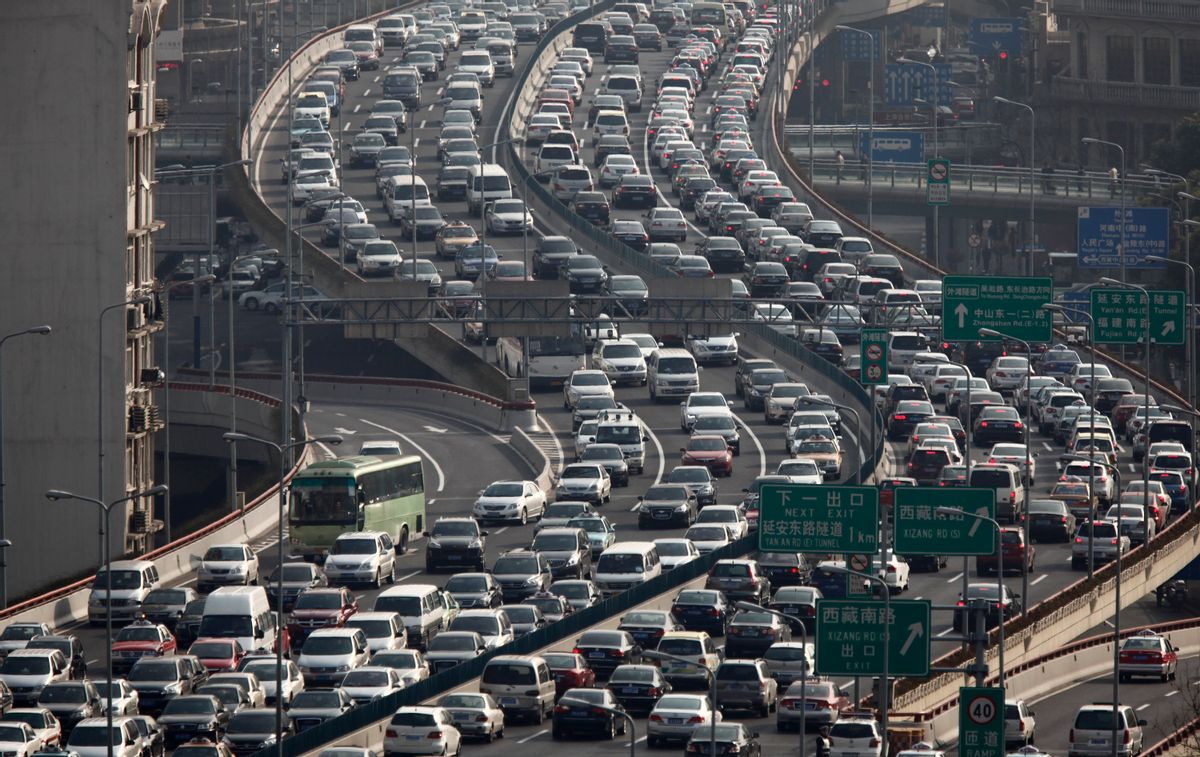 Last month, the Carnegie Endowment published a report arguing that you can estimate the size of developing countries' middle classes by counting their cars, that ultimate symbol of having "made it." If the notion is to be believed, these places have a long way to go in terms of economic development: In Brazil, there are fewer than 200 passenger vehicles per 1,000 people. China has a mere 34. India has 12.

Compare that to the U.S., which has about 900 vehicles per 1,000 people. And then consider the fact that these countries are striving hard to match the American lifestyle. Once their middle classes really start to blossom, the developing world's car-buying frenzy will be spectacular, and a true carmageddon for its cities, which seem thoroughly unprepared.

"I did a paper recently forecasting car growth in China," says Daniel Sperling, director of the Institute for Transportation Studies at University of California-Davis and co-author of "Two Billion Cars." "We said all the forecasts by the IEA (International Energy Agency) are very conservative." And as goes China, so goes the developing world. "China is a bellwether for how the emerging economies of the world are likely to evolve." Which is to say, the number of cars worldwide could easily grow by 375 percent over the next three decades, the vast majority of them in Asia, Eastern Europe and Latin America.

This growth, combined with poor infrastructure and crowding, has already made driving in many of these cities a hellish affair. In his book "Straphanger," Taras Grescoe describes the dystopic experience of driving through Shanghai: "a scrim of smog obscures even the taillights of the cars ahead, and the congestion has turned the Yangpu Bridge to Pudong, one of the world's longest bridges, into a six-lane parking lot." Two years ago, a 62-mile Beijing traffic jam lasted 10 days. Yet cars keep flying off the lots. The number of private cars in China more than doubled between 2005 and 2008.

Which raises the question: If driving in these cities is so miserable, why do more and more people want to do it? With the folly of car-oriented development now so clear, why isn't the developing world tacking harder in the other direction?

"The car appeals to many of our human desires," says Sperling. "What's the nature of humanity? It's to interact with other people, to participate in activities, and if you have a mechanism that facilitates that, it's going to be very attractive."

The irony is, even as they allow us to reach more people, cars isolate us, which sounds sad as a first-world problem, but may be part of their appeal in teeming developing cities, where many streets don't even have sidewalks, and the ones that do are jammed to capacity; pedestrian crowding in Mumbai has gotten so bad that the city is building "skywalks" above the sidewalks. The transit systems are often just as crunched -- even Bogota's celebrated Transmilenio system is bursting at the seams, making public transportation an unpleasant experience and pushing people into private vehicles when they can afford it.

"When I go to these places, I take transit across town to work," says Colin Hughes, an analyst for the Institute for Transportation and Development Policy. "I was just in India, and I get on the bus at rush hour and it's invasively packed. You're physically pressed up against everybody, you're all sweating through your shirts, and you look out the window and see someone sitting in their car, and you imagine the air conditioning and the classical music."

Not that air-conditioned, iPod-docked Beemers are the norm in these countries.  But even a very cheap, very used car is considered a powerful symbol in places with 30 percent poverty. "In developing countries, car ownership is almost synonymous with ... middle-class status," writes Uri Dadush in the Carnegie report. "If you're the first person in your family to graduate from college or get a job in the technology sector, a car is an important part of those aspirations," adds Hughes.

And those aspirations are being stoked by the auto industry for all they're worth. BMW is opening a new dealership in China every week. Land Rover recently dispatched Victoria Beckham to Beijing to promote its new model. "Manufacturers are scrambling into new niches and segments in China to suck out profits they could not easily find at home," the Financial Times recently reported.

These marketing blitzes have thrown fuel on the fire that threatens to engulf these cities with even worse congestion and pollution if they don't deal with the problem right quick. China is interesting, because, as with so many things, its transportation falls at both extremes of the spectrum. On one hand, its cities are growing as if guided by the treacherous hand of Robert Moses. "As Beijing orders up ever more freeways and parking lots, walking, biking, and public transit are declining," reported Foreign Policy this month. "Since 1986, auto use has increased sixfold in Beijing, while bike use has dropped from nearly 60 percent of trips to just 17 percent in 2010." Bicycle-related fatalities are soaring, and China has the world's highest car-related death rate.

At the same time, however, China may lead the way toward less car-dependent cities. Beijing is building out its subway system at a rate that's truly mind-boggling. The city of Guangzhou has a bus rapid transit system with three times the capacity of any other in Asia. Hangzhou, a city of 7 million, has the world's largest bike-share system, five times the size of the one coming to New York.

"All the major cities in China now put limits on how many people can buy cars," says Hughes. "They're starting to get a hold on parking pricing. There's a lot of interesting work going on in the developing world." And because the number of cars in these countries is still so small (at least for the next few years), Hughes says now is the critical moment where they can "leapfrog" car-oriented development, the way some developing countries leapfrogged landlines and went straight to mobile phones.

"Most of these countries have car ownership rates that are literally 10 times lower than the U.S." says Hughes. "If you accept the premise that a car-dependent society has more problems than it's worth, the time to take action would be before you've sunk trillions of dollars into an interstate highway system and your cities have taken on a really sprawled-out development pattern."

Indeed, all those apocalyptic traffic-porn photos obscure the fact that many of the people in these cities are actually living out an extreme version of the New Urbanist ideal. They walk to their destinations, use transit and do their business locally. "In India, something like 50 percent of the urban population walks to work," says Hughes. These countries missed out on many of the 20th century's technological comforts. Going into the 21st, that may turn out to give these cities an edge if they look forward instead of back.