A New York magazine story proposes a vast left-wing conspiracy at the movies. It's as fanciful as celluloid itself 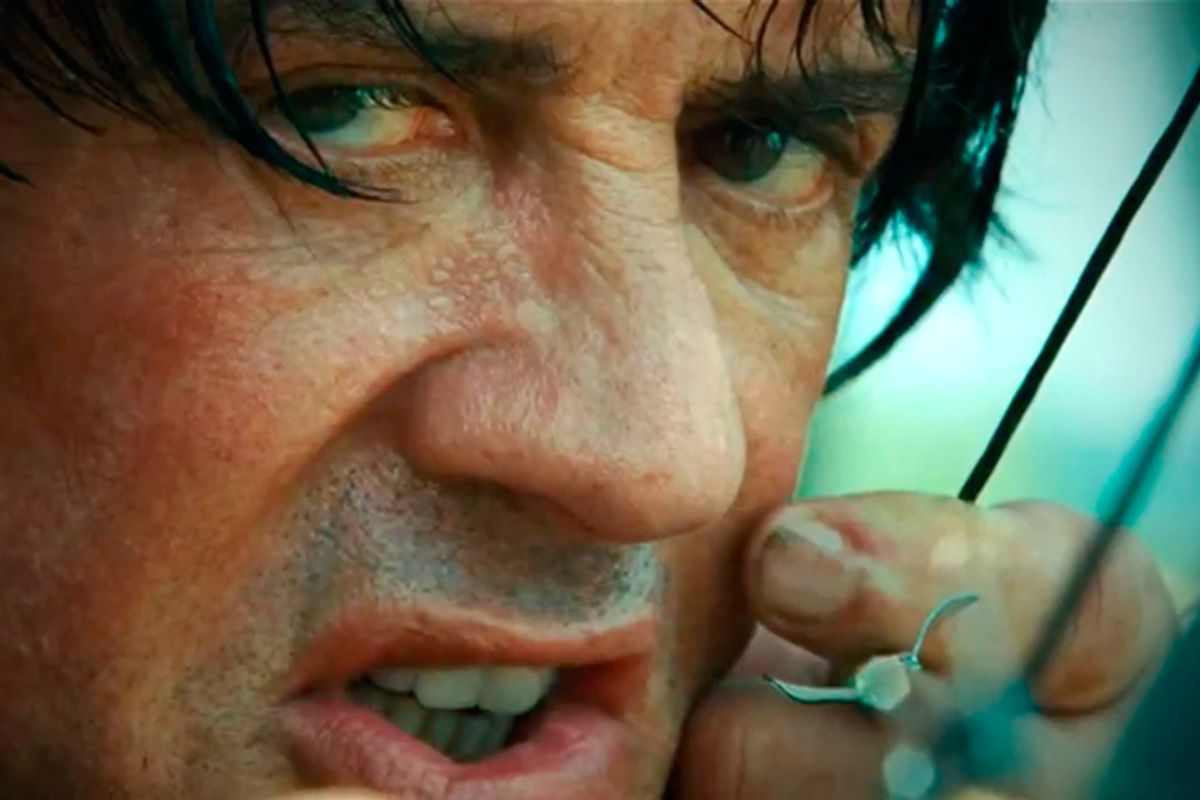 Jonathan Chait’s New York magazine piece, “The Vast Left-Wing Conspiracy Is on Your Screen,” props up the very tired, and very dangerous, notion that the product of Hollywood is liberal. Here’s how you refute it:

Think of almost every movie you’ve ever seen.

Seriously. Once you do that, the product of Hollywood, i.e., the movies, is revealed to be as white as the Republican Party, as violent as a neocon’s wet dream, and as monogamous as no one’s wet dream.

The GOP propagates an absolutist vision of good vs. evil? Hey, so do the movies! The GOP is dominated by white men? Most movies star white men! With guns! And when bad guys gather, there’s one thing Hollywood and the GOP agree on: Keep the diplomats out because they’ll just screw things up with their words. Stupid words. Who needs words when you can kick some ass!

Chait’s thesis is a textbook example of not being able to see the forest for the trees. Here are some of his trees:

I’ll give him rich villains. Most movies are about underdogs, which the rich are not, except in the fevered imaginations of Fox News. Even Hollywood hasn’t gone far enough to make them heroes. Except, of course, when their names are Bruce Wayne or Tony Stark.

I’ll give him “Avatar” ... except not on his grounds. Tree-hugging mysticism? How about a not-so-subtle attack on the military-industrial complex? How about a greater critique of the Iraq War (“shock and awe”) than its main opponent for best picture that year, “The Hurt Locker,” which was actually set in Baghdad in 2004?

But I won’t give him “Margin Call.” It was barely seen. Its widest release was a mere 199 theaters (one-twentieth of a summer blockbuster), it grossed $5 million, and it was hardly the blanket condemnation of Wall Street Chait makes it out to be. It was a complex, ambiguous movie. One of the nastier execs, who turns out to be more loyal than we suspect, makes this speech as he’s driving back from Brooklyn in his convertible:

The only reason that [most people] get to continue living like kings is cause we got our fingers on the scales in their favor. I take my hand off and then the whole world gets really fuckin’ fair really fuckin’ quickly and nobody actually wants that. They say they do but they don’t. They want what we have to give them but they also want to, you know, play innocent and pretend they have no idea where it came from. Well, that’s more hypocrisy than I'm willing to swallow. So fuck ’em. Fuck normal people.

Meanwhile, “Veep” skewers everyone, and the Democratic incumbent in “The Campaign,” played by Will Ferrell, is a sleazy John Edwards type who screws any woman. Sometimes he does it in his campaign commercials. Chait’s readings of Hollywood movies turn out to be more reductive than the reductive movies he’s supposedly watching.

He thinks “Dirty Harry” is an anomaly and “Rambo” is forgotten. They’re not. They’ve been replaced by “300,” and “Taken,” and “G.I. Joe,” and the “Transformers” trilogy. He thinks “Syriana” shows us the dangers of our misbegotten wars. Maybe. But it, too, was complex, murky and barely seen. Its widest release was 1,775 theaters, which was the 117th-widest release of 2005, and it grossed $50 million domestic, making it the 56th most popular movie that year. No. 2? “The Chronicles of Narnia: The Lion, the Witch and the Wardrobe.” I believe there’s a Christ analogy in there. No. 4? “War of the Worlds.” Beware of foreign invasions. No. 8? “Batman Begins.” Because when street violence happens, it’s best to take the law into your own hands. Because you are pure and the system is not.

Chait keeps doing this. He keeps bringing up the barely seen to prove his point while ignoring movies that are disseminated everywhere. It’s as if, to prove that liberals dominate the airwaves, he talks up “Fresh Air” but ignores Rush Limbaugh. His is a cloistered viewpoint in which HBO’s “Girls” matters. Yet, for most of the country, “Girls” doesn’t even exist. As in most Hollywood movies, girls don’t exist.

Who are the heroes of most movies? Superheroes and soldiers, cops and cowboys. The movies haven’t progressed past the mind of an 8-year-old boy. Neither has the Republican Party.

In recent years, the obsession that young viewers have with the action movie has helped the political conservatives. Because it’s basically saying all you braino, pointy-headed intellectuals, you’re all wimps and losers. It’s the action guy, the military guy, the police guy—he’s the real hero of society, the real man, and he’s the kind of guy you should be like.

That’s the forest that Chait, obsessed with the trees, or with twigs he’s found on the ground, misses.

John Wayne, George W. Bush
Chait makes one good point. It’s about a twig he found on his short walk through the Hollywood trees:

When Joe Biden endorsed gay marriage in May, he cited Will & Grace as the single-most important driving force in transforming public opinion on the subject. In so doing he actually confirmed the long-standing fear of conservatives—that a coterie of Hollywood elites had undertaken an invidious and utterly successfully propaganda campaign, and had transmuted the cultural majority into a minority. Set aside the substance of the matter and consider the process of it—that is, think of it from the conservative point of view, if you don’t happen to be one. Imagine that large chunks of your entertainment mocked your values and even transformed once-uncontroversial beliefs of yours into a kind of bigotry that might be greeted with revulsion.

You’d probably be angry, too.

I am angry, but for the opposite reason. Yes, the movies influence us. Yes, TV influences us. In my mind, everything affects everything, and if you’re seen on 4,000 screens or in millions of households you’re affecting things that much more.

So “Will and Grace” made us more tolerant of homosexuals? Good. I wonder if it makes up for the decades of sissies and perverts and suicidal sad sacks that were detailed in “The Celluloid Closet,” a documentary on Hollywood’s sad history with homosexual characters. Chait suggests that the portrayal of black presidents in movies like “Deep Impact” paved the way for Barack Obama? Good. I wonder if it makes up for decades of Stepin Fetchit roles, the lazy and the fearful and the laughable, which were the only black faces seen on movie screens for years.

More to the point: If “Will and Grace,” a singular phenomenon, is so influential, what about the aforementioned westerns and cop shows, war movies and superhero epics? What influence do they have on us?

Could Ronald Reagan have been elected president without John Wayne on the movie screen? Could George W. Bush? Both played up the cowboy angle. Both kept using the lines of Hollywood to further their political goals. “Go ahead, make my day,” Reagan said. “Wanted dead or alive,” Bush said of Osama bin Laden. “Bring it on,” Bush said to the Iraqi insurgents. One imagines that he saw himself as an action hero in an action movie. Most of America did, too. Except the Iraq War didn’t end the way movies are supposed to end. It just kept going. It got messier and bloodier and more difficult to sort the good guys from the bad guys. The audience got restless. It thought it was watching something by John Ford or Clint Eastwood and it turned into “The Battle of Algiers.” It turned French on us. We walked out. We wanted a happy ending. Lesson unlearned.

And that’s my point: Not only is the product of Hollywood not liberal, but its playbook, its archetypes and story lines, have been stolen by the GOP to get their candidates elected.

Chait begins with the culture wars of the early 1990s (“Murphy Brown,” “Cape Fear”) and wonders where they went. He argues that conservatives have given up. They haven’t. They bitched about “Million Dollar Baby” and its right-to-die ending. They bitched about “Avatar” and its trees. They bitched about “The Blind Side” and a photo of George W. Bush on the wall. They keep on bitching. Chait argues that liberals won the early ’90s culture wars because these days homosexuals are sometimes depicted as human beings rather than demented perverts. I say conservatives won that war because they branded the product of Hollywood as liberal and the label stuck.

But it’s a false brand. Seriously. Just think of almost every movie you’ve ever seen.