After Todd Akin exposed their extremism, Republicans are once again trying to blame Democrats for a "war on women" 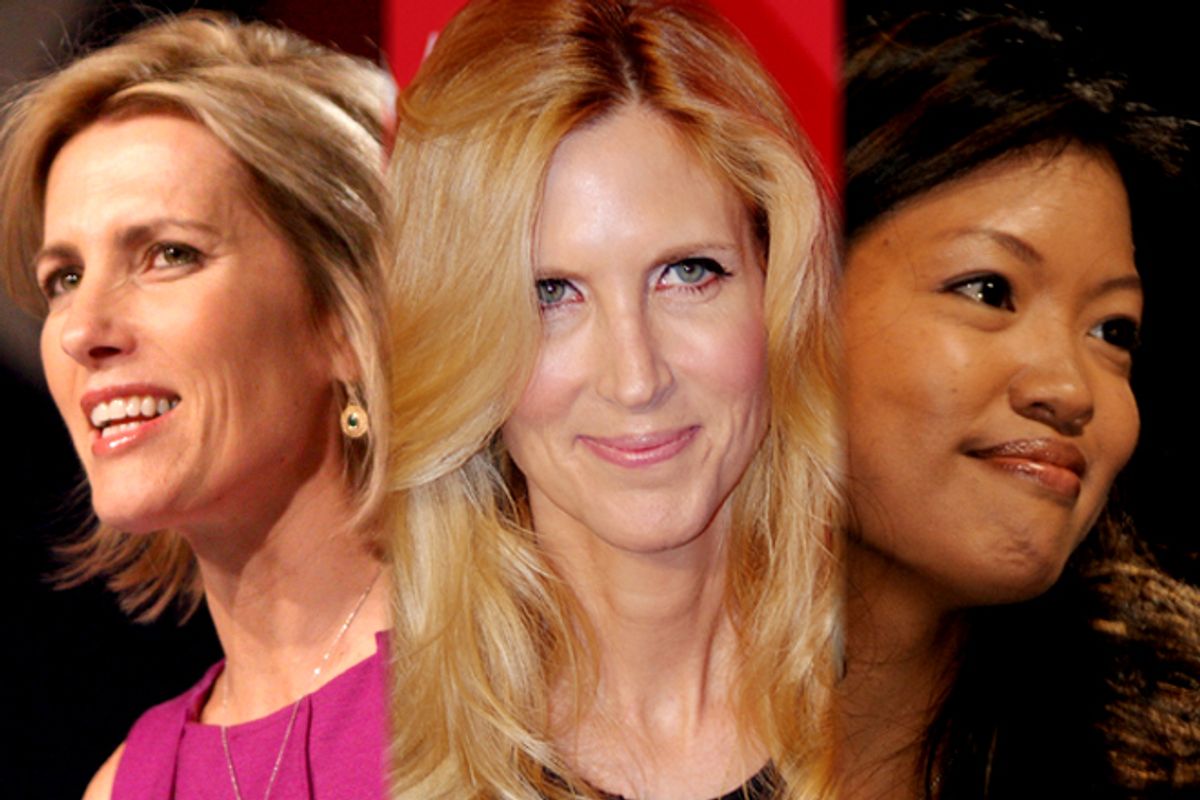 According to conservative commentators, the notion of a Republican war on women is a figment of Democrats’ imaginations — a manufactured “false narrative” according to Michelle Malkin; “contrived,” says Laura Ingraham.  In fact, Republicans allege Democrats are the ones going after women’s rights and freedoms. “We can’t have a war on women,” Ann Coulter recently said, “because the Democrats have won that war between Teddy Kennedy, Bill Clinton and Anthony Weiner."

But Democrats are merely accurately describing to the American people the hostile and putative policies pushed by Republicans.  As I said recently on Fox News’ "O’Reilly Factor," Republicans want to tell women who are raped that they have to have the baby of their rapist. That’s not exactly a war on rapists.

Despite the fact that our nation is climbing out of a historic recession and struggling with still-too-high unemployment and other serious challenges, the Republican leaders of the current, 112th Congress have declared passing anti-choice legislation a “top priority." In fact, the third bill introduced in the Republican House of Representatives was not a jobs bill or a bill to rein in foreclosures but legislation to ban federal funding of abortions. Overall, the current Republican House has held eight votes on choice issues — the highest number since 2000.

And remember last summer when Republicans refused to pay our nation’s overdue bills, threatened to shut down our government altogether and sparked a downgrade of America’s credit rating? Republicans only agreed to raise the debt ceiling by attaching an amendment to prohibit public funding for abortion services in Washington, D.C.

And now we have the draft Republican Party platform, which one committee member boasted is the “most conservative platform in modern history.” The platform includes a “human life amendment” to the Constitution that would bar abortion under any circumstances, with no exception for cases of rape or incest. The committee also adopted language that could bar certain forms of contraception and even expose women seeking health advice to criminal penalties. Plus the Republican Party platform praises “informed consent” laws like the one in Virginia that subjected women seeking abortions to mandatory, invasive vaginal ultrasounds. On the other hand, the platform endorses a constitutional amendment to make it near-impossible to raise taxes for anything other than military spending. Plain and simple, the Republican Party wants government out of your wallet and in your weehaw.

But wait, you might be thinking: “That’s just the Republican Party and the much-despised Republican House of Representatives. Mitt Romney likes women. Ann Romney keeps insisting as much!” On Fox News, Dick Morris tried to insist that the Todd Akin story is a “big plus” for Romney since the presidential candidate has an opportunity to distance himself from extreme, anti-choice stances and articulate his moderate position. Oh, really?

During his 1994 run against Ted Kennedy for the Massachusetts Senate seat, Romney said, “I believe that abortion should be safe and legal in this country.” On the legal status of abortions, Romney said, “I believe that since Roe vs. Wade has been the law for 20 years that we should sustain and support it and I sustain and support that law and the right of a woman to make that choice.”

But that was when he was trying to win office in a liberal state — appealing to liberal voters. When running in Republican presidential primaries, Romney changed his tune — to appeal to conservative voters. “We should overturn Roe v. Wade and return these issues to the states," Romney said during a GOP primary debate in 2007. "I would welcome a circumstance where there was such a consensus in this country where we said we don't want to have abortions in this country at all.  Period. That would be wonderful. I'd be delighted to sign that bill.”

In October of 2011, during his second run in the Republican presidential primaries, Romney appeared on Gov. Mike Huckabee’s TV show and said, “My view is that the Supreme Court should reverse Roe v. Wade and send back to the states the responsibility for deciding whether it is legal or not ... Would it be wonderful if everyone in the country agreed with you and me that life begins in conception and that there’s a sanctity of life that’s part of a civilized society and that we’re all going to agree there should not be legal abortion in the nation? That’d be great.”

And then Mitt Romney chose as his running mate Paul Ryan, who co-sponsored two extremist, anti-choice pieces of legislation with Rep. Todd Akin. One bill would have offensively and dangerously narrowed the legal definition of rape to “forcible rape." The other Akin/Ryan bill would have defined fertilized eggs as human beings, opening the floodgates to ban all abortions, restrict certain forms of birth control and fertility treatments, and in some cases subject women seeking health advice to criminal penalties.

But, some might object, Ryan isn’t the presidential candidate. No, but Mitt Romney picked Ryan for his extreme conservative bona fides. And Mitt Romney has said that he would support such a “personhood” amendment to the Constitution — that is, before the Akin controversy sprung up and Romney started walking back his recent anti-choice remarks.

While 77 percent of Americans believe that abortion should be legal in some or most instances, the dominant forces in the increasingly extremist Republican Party want to outlaw abortion in all cases, no exceptions, and impose invasive procedures and criminal penalties on women who even think twice about terminating a pregnancy. Republicans are trying to have it both ways — condemning Todd Akin’s words while embracing his ideas, whining about Democrats labeling the “war on women” while doing everything legislatively and politically possible to further that war. The Republicans' extremist, anti-choice agenda is very clear and now very front-and-center in this election. Mitt Romney can’t Etch-A-Sketch his way out of his own statements and away from his own party’s radical, unpopular and insensitive agenda.