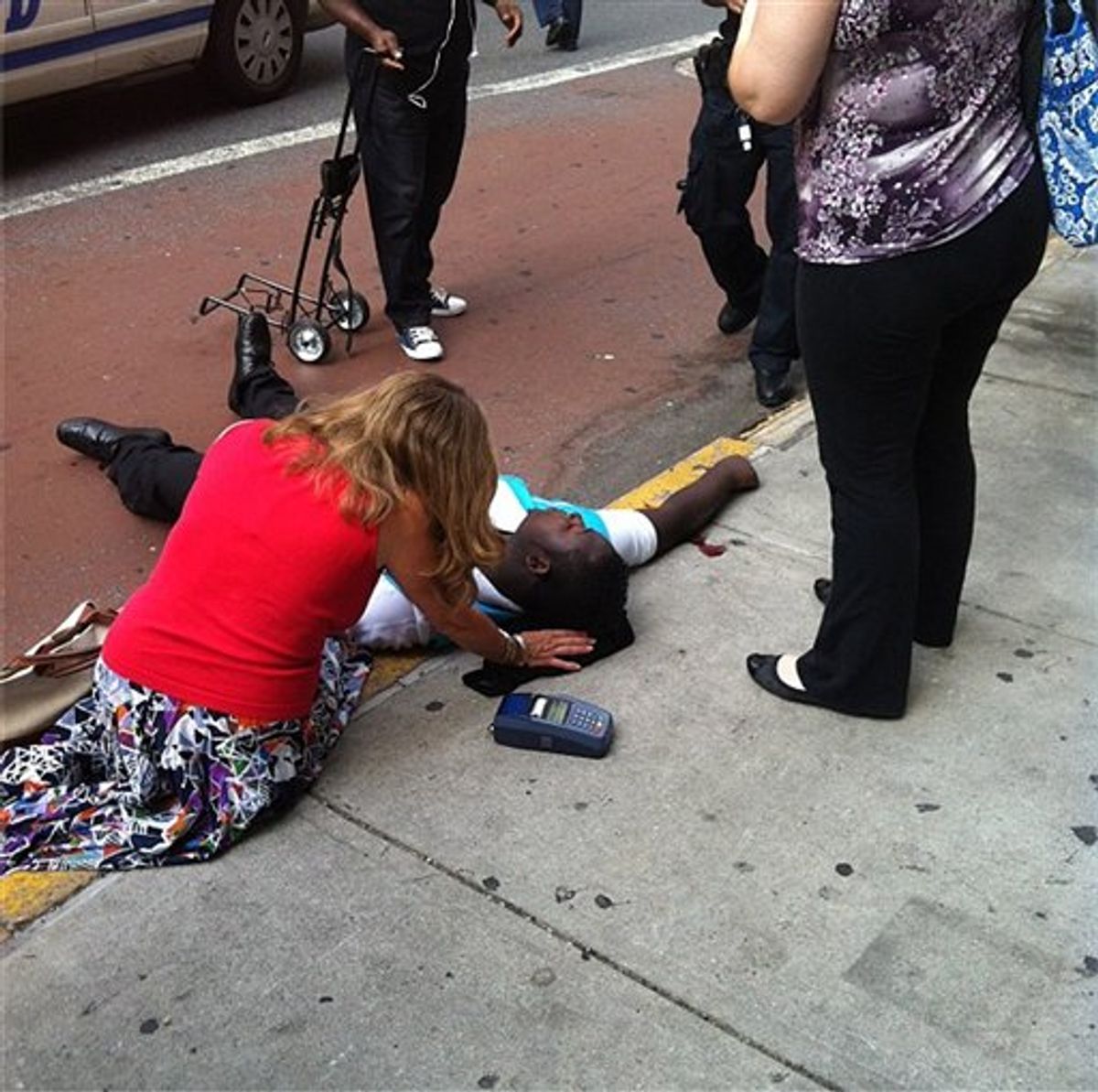 This photo posted to an Instagram account belonging to a person identified as mr_mookie, an eyewitness at the scene, shows a victim of a shooting being tended to by pedestrians outside the Empire State Building. (AP Photo/mr_mookie via Instagram)
--

Just over a week after NYPD officers shot and killed a knife-wielding man in Times Square, reports emerged from today's fatal shooting outside the Empire State Building that some of the injured bystanders had been struck by police-fired bullets.

Nine people were injured and two were killed in the midtown shooting, which began when 58-year-old Jeffrey Johnson approached his former employer and shot him in the head at close range. The shooter then fled, chased by two uniformed officers. Johnson opened fire on them, before they returned fire, fatally shooting him. Of the bystanders who were shot, New York Mayor Michael Bloomberg admitted "some may have been shot accidentally by police officers who responded."

Details remain unclear as to which shots came from Johnson and which from the NYPD. However, as Gothamist noted, "Johnson's gun holds eight bullets and he reportedly used at least three to shoot his manager. Officers fired 14 rounds and nine bystanders in total were shot." Stray bullets hit victims standing inside the Empire State Building foyer and one bystander standing behind the window of a nearby Duane Reade.

Like the incident earlier this month in Times Square, the shooting has prompted questions about police operation of firearms; in both cases multiple rounds were used to take down and kill one assailant. And although these incidents in two of the city's busiest tourist areas provide headline-grabbing news, for many New Yorkers, police-involved shootings are less uncommon. Notably, in February police shot unarmed 18-year-old Ramarley Graham in his Bronx home; the shooting officer has been indicted on manslaughter, not murder charges.

According to the annual NYPD Firearm Discharge Report (most recently released for 2010 incidents), in 2010 the NYPD had the "fewest firearms discharges, and shot and killed the fewest number of people since formal recording of such data began 40 years ago in 1971." The number of subjects "shot and injured" by officers that year was 16, according to the report. Figures for 2011 and 2012 are not yet available, but will likely be higher. It remains to be seen how the police’s use of lethal force today will be judged -- but it's certainly a number of injuries to add to the 2012 firearm discharge tally.

UPDATE: According to the New York Times, "A law enforcement official said later on Friday that Mr. Johnson did not fire his weapon at the
officers." This runs counter to earlier reports and statements from Mayor Michael Bloomberg and police commissioner Ray Kelly who both said the police were returning fire.. This also suggests that all bystanders may have been struck by police bullets.