Wall Street: Rise of the machines

Algorithms rule the markets. They even read the papers 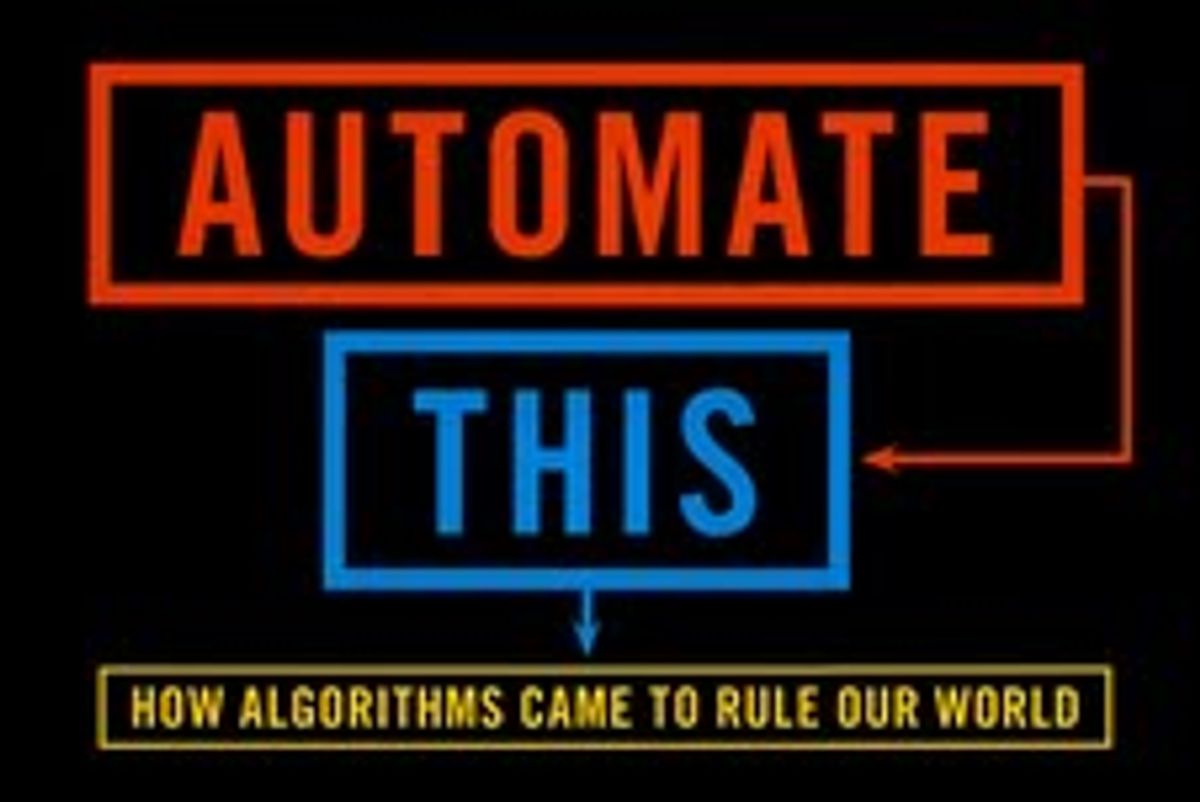 Excerpted from Automate This: How algorithms came to rule our world which will be available on August 30 from Penguin Portfolio.

In today’s stock market, humans have largely been reduced to interested observers. The algorithms own the market now. Dow Jones and Bloomberg offer news services that are written specifically for the trading bots. These stories would be incomprehensible to a human, but make perfect sense to an algorithm. The news affects the markets, and just as Wall Street traders once skimmed Barron’s on their train ride in from Greenwich, now algorithms read the paper too. They just read it a lot faster.

When machines are at the controls, we can never be sure exactly what the market will do. The disappearance of $1 trillion in wealth on May 6, 2010, is a case in point. And the aftershocks continue. Six months later, Progress Energy, a utility in North Carolina, saw its shares shed 90 percent of their value in minutes for no apparent reason. Apple shares, which rode wild price swings on that May 6, inexplicably dropped 4 percent several months later, wiping out $16 billion of market cap before rebounding. Michael Kearns, a professor at the University of Pennsylvania who has written algorithms for traders and studied this new, machine-ruled market, says there’s no way to understand the implications of giving algorithms the full control that they now possess.

The competition between warring Wall Street algorithms has become so bizarre that there are days when 40 percent of the trades on all U.S. exchanges, from the Nasdaq to the NYSE, are made by just two midwestern companies that most people, even those who work in finance, have never heard of. One of them, Getco, is located in Chicago; the other, Tradebot, is in Kansas City. Both firms employ world-class hackers and engineers who are focused on clearing profits of often less than one cent per share. Getco and Tradebot deploy thousands of algorithms to scour the markets for the tiniest of opportunities. And there are thousands of other companies, some big, some small, that exist only to do the same thing—to make money on the market with bots. All in all, this means that algorithms are the stock market, as they now carry out 60 percent of all trades in the United States; European and Asian markets aren’t far behind. What once was determined by biting, swarming, and barking hordes of men is now decided by battling algorithms that are constantly testing each other, grappling for an edge, feigning their intentions, and learning as they trade.

There’s plenty of good that has arisen from algorithms’ role in our markets—the normal man’s ability to trade stock for $7 from the laptop screen in his kitchen being chief among them. As the market shifted from one where each order had to pass through pits of humans to one that’s facilitated by algorithms and exchanges hosted on computer servers, the costs of trading have plummeted. But we’ve blown by the utility of cheaper traders to a strange Star Wars–like battle that features fewer human inputs and more algorithmic autonomy. The speed at which something can go wrong is frightening. Knight Capital, one of the oldest and largest hands in the game, lost $440 million in 45 minutes on August 1 because of a software “glitch.”

Our stock markets have become such specialized electronic battlegrounds that some algorithms sit silently for months, waiting to ambush enemy algorithms that display design flaws, dated code, or a discernible pattern to their trading. Many of the algorithms plying our stock markets are built to mimic randomness. What’s random can’t be gamed, planned upon, or hijacked. For example, some of the most important algorithms on Wall Street trade stocks that belong to normal people—people who may own mutual fund shares in their 401(k) plans or IRAs. When a mutual fund company, be it Fidelity, Vanguard, or T. Rowe Price, makes a trade to add to a position or subtract from one, it’s inevitably a very large order. Trading a million shares of a stock, even a heavily traded one such as Apple or ExxonMobil, can move the market against the large seller or buyer. If other traders know that an order to buy a million shares is coming through the pipe, they will do whatever they can to get in front of it and buy up available shares. That way, they can repost their newly acquired shares for sale at a higher price knowing that they’ll get sucked into the mutual fund order.

When a mutual fund has to pay more for its shares, it costs the owners of that fund—normal people saving for retirement—money. To combat traders prowling for big orders to abuse, mutual funds and other institutional traders hired hackers to develop algorithms that randomly disguise their large trades by breaking them up into smaller ones. But Traders who were at first defeated by algorithms disguising big institutional orders soon developed complex scheming algorithms of their own that could sniff the market for large trades that had been disguised.

Mutual funds and institutions dealing in giant blocks of stock reacted by building better algorithms of disguise—bots that issued decoy trades and would easily shift strategies if they suspected detection. The hunters, again, responded in kind, leading us to the current state of the stock market wherein algorithms are the gladiators and normal people, just like in the days of the Colosseum, stand by and watch. It’s a fantastic game, although it has little to do with the base mission of the stock market: allowing growing companies an easy path to raising capital while giving the public a chance to invest in something that can build wealth in a meaningful way.

Wall Street leaders have acknowledged that a rogue series of algorithms could spark a string of colossal losses that their owners can’t cover. Because some high-speed trading algorithms are able to trade on margin with leverage, it’s conceivable that a series of bad trades, all conducted in seconds, could lead to a liquidity crisis, bankrupting a trader’s broker and the clients he trades for. Such incidents have nearly happened before. In late 2009, Chicago’s Infinium Capital Management, one of the more secretive and powerful trading houses in the United States, twice lost control of an algorithm that began selling S&P 500 futures as fast as it could, dropping the market.

This virtual world of warring algorithms is what has become of Wall Street and our money. It doesn’t stop there. The bot saga on Wall Street offers clues to what’s in store for much of our future world as we hand over more and more control of nearly everything to brilliant yet fallible algorithms.

Excerpted from "Automate This: How Algorithms Came to Rule Our World." Published by Portfolio | Penguin. Copyright (c) Christopher Steiner, 2012.