If you're shopping on a tight budget, the HP G6t-2000 is the computer for you 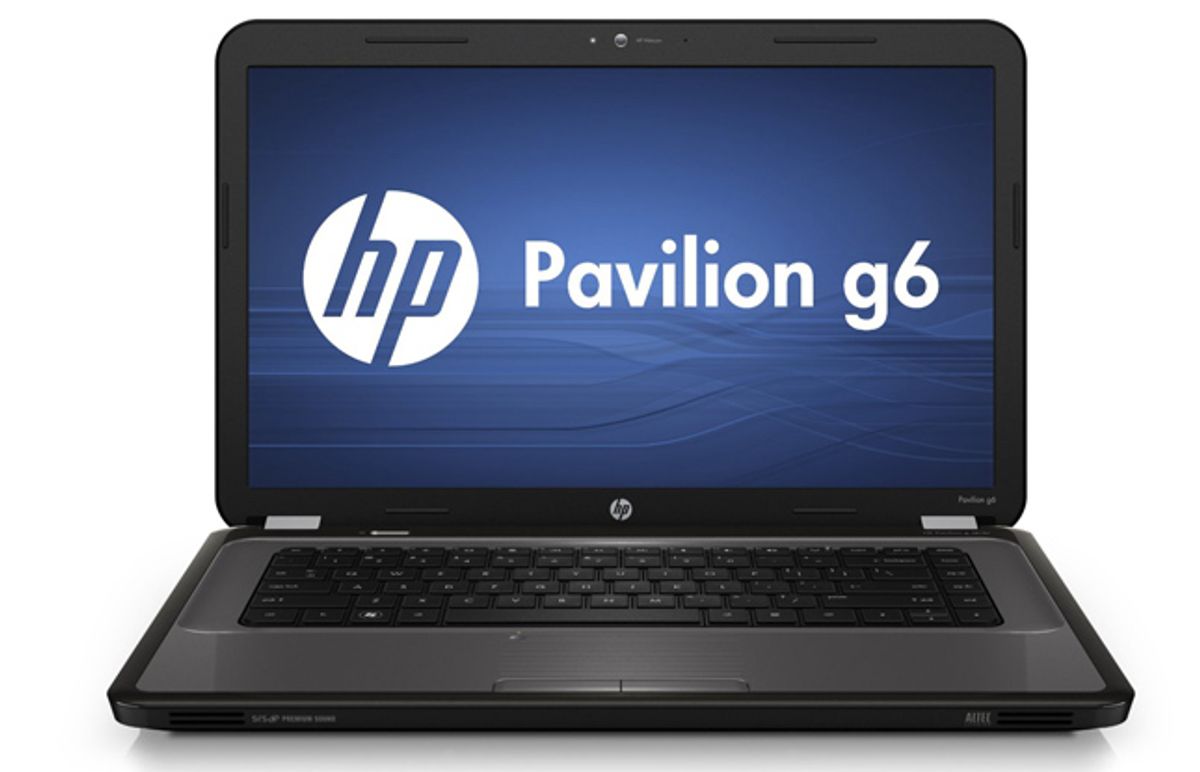 My pick for a budget laptop, which covers everyday computer needs at a lower price-point than a workhorse laptop, is the HP G6t-2000.

Most laptop reviewers focus on flashy expensive systems rather than budget laptops, so reliable sources are hard to come by. But the designs of these systems don't change much year-to-year, and after spending about 15 hours comparing reviews of past models, researching hardware specs and hunting around for deals I think the HP G6t is the one to get.

Ideally, a budget laptop gives you desktop replacement functionality–meaning a screen around 14 or 15 inches and a disc drive for DVDs–as cheaply as possible.

This starting build comes with an Intel Core i3 processor, which is good, but I'd pay $100 to upgrade to an Ivy Bridge i5 for all-around better performance and graphics that are twice as fast.

A budget laptop like the G6t costs about as much as an iPad. For web browsing and reading emails, a tablet is as portable and convenient as you can get. But if you need a real keyboard, bigger screen and the ability to multitask with Windows software, a $550 laptop today is way faster than a $2000 laptop from back in 2008. You can buy a lot of computer these days for less than 600 bucks.

The main thing you give up with budget laptops, compared to workhorses or great all-around laptops, is build quality. The parts are cheaper. The body is plastic and chunky. The screen is lower resolution. Ultrabooks, for example, have smaller screens and no disc drives, but they're much lighter and sturdier and their batteries last much longer. Even the best budget laptop is going to feel flimsy compared to a $1000 system.

The HP G6t's build quality can't measure up to a MacBook, but with either an Intel i3 Sandy Bridge processor (base) or i5 Ivy Bridge (recommended upgrade), it's still going to be pretty fast, and it has 4GB of RAM to help with multitasking and a 500GB hard drive that offers plenty of storage. Laptop Mag, our go-to source for thorough reviews, gave the 2011 model 4 out of 5 stars and praised its overall performance, keyboard and speaker quality.

At under $600, the G6t is a damn cheap laptop, and that i3 processor will be fast enough to handle day-to-day stuff: Streaming Netflix, browsing while playing music and using Microsoft Office, etc. As I mentioned earlier, there are two big reasons to upgrade to the i5 processor for an extra $100.

One: CPUBenchmark.net shows the i5 is about 25% faster thn the i3. Two: Ivy Bridge's more efficient architecture keeps power consumption about the same (or even lowers it) while delivering much, much better graphics performance. Stepping up to the Ivy Bridge i5 will actually make games playable on this machine, as Anandtech found graphics performance consistently 40% to 100% faster.

A lot of systems–including all of HP's laptops that are cheaper than the G6t–run on AMD's processors or Intel's Celeron or Pentium lines, which are all slower than Intel's Core i line. A lot slower, in fact. On NotebookCheck, a site that benchmarks tons of mobile processors and graphics cards, the fastest Pentium and AMD chips sit at positions 106 and 107. The i3-2350M is at 82, and the i5 we recommend is way up at 49. In other words, this isn't a knock-off chip built for crappy, cheap systems. On the other hand, dropping down to one of those much slower processor only saves you about $150. It's not worth it.

Second: The G6 is well-reviewed on multiple sites, which is something most budget laptops can't claim. Laptop Mag's review of the 2011 model noted their system never reached uncomfortable temperatures even under load, and said "typing on the keyboard was comfortable, thanks to the nice terraced shape of the keys and solid feedback." They included the laptop on a "Top 8 laptops under $500" list in January 2012 and listed it as the "Best overall value" laptop on a July 2012 Back-to-school list.

Laptop Mag hasn't reviewed the system with 2012 hardware yet, but Editor-in-Chief Mark Spoonauer told me it was a "smart bet" and an update to their favorite budget laptop.

NotebookCheck's review says: "The HP Pavilion g6 is a capable and, above all, inexpensive office notebook with only minor flaws." The flaws are issues that virtually all laptops in this category have: the display's viewing angles are poor, black levels are a bit shallow and the keyboard doesn't feel as solid as a good chiclet layout. But they do praise the separate mouse buttons under the touchpad (a lot of systems use single-button rockers, which suck), say the keyboard is easy to type on, and say and the system is plenty cool and quiet.

Could you spend less and get a netbook? Yes, but you shouldn't. They're too slow and their screens are too small. Don't buy one. The Vaio E Series 11, for example, looks nice, but scored far below the budget category average in performance in Laptop Mag's tests.

Netbooks aren't worth your time, but there are a lot of 14-inch and 15-inch budget laptops specced just like the G6t, like the Dell Inspiron 15R. But the Dell weighs at least six pounds (half a pound more than the G6t), and costs at least $50 more in its base configuration. Laptop Mag gave it only three stars, citing its bulk and poor battery life; they prefer the Lenovo Z580. An i5 configuration of the Z580 can cost as low as $630 on Amazon, but you can get the equivalent G6t for $550. And that's a deal on the Z580–Lenovo normally sells that system for $950. That's way out of budget territory.

The Toshiba Satellite C855 only offers an i3 processor for the same $550 an i5-equipped G6t costs, plus it's designed with a weird half-size space bar. A CNET review of another Toshiba Satellite, the L755, says "alternatives are out there that offer bigger bang, and better processors, for the buck. This machine excels at little, and it's bulky, too." And it has that same funky spacebar.

There are plenty of great laptops out there from the likes of Acer and ASUS, but not at $500. For example, Laptop Mag recommends the Acer Aspire V3, but it costs 850 bucks–we say go for the Lenovo T430 workhorse at that price.

HP knows how to make a laptop on a budget, and the G6t is a great successor to the retired HP G4. With an i5 and 4GB of RAM, it'll do the job of a much more expensive laptop, but in a much cheaper body.

Last year's model: Slickdeals, LogicBuy and FatWallet always have deals on laptops, and you can save several hundred bucks if you're patient and wait for a good sale. With one of these sales you can get a workhorse or at a budget price, or a budget laptop for extra cheap. I recommend getting something with an Intel Core i processor rather than a Celeron or Pentium It'll serve you better long term.