Apology to my former student

I was shocked by an online critique that bashed my college teaching skills. But I also thought it might be right 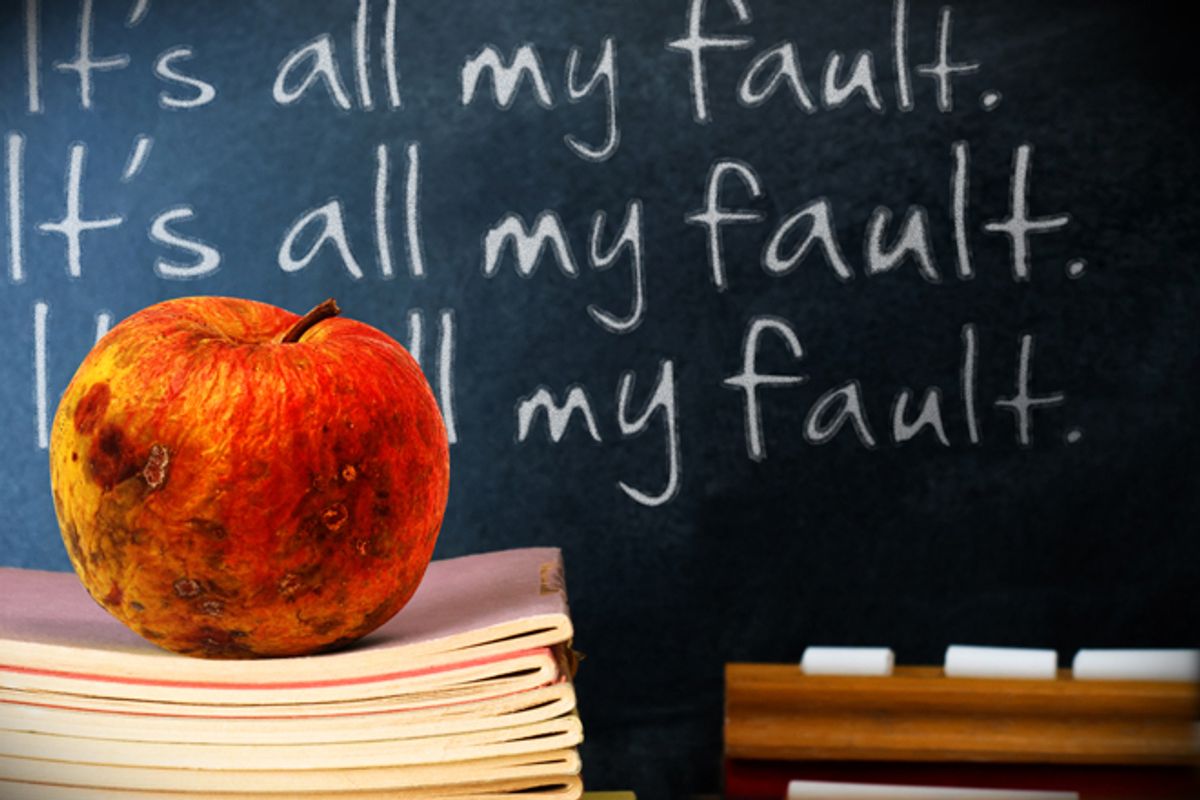 I’m not in the habit of checking Rate My Professor, a popular a site that allows students to critique a professor’s teaching style, personality and even “hotness.” But with a new school year around the corner, I figured: Why not? The comments from the previous semester were posted, and I hadn’t checked the site in a while. I’m sure I’m not the only person in the academy snooping around to find out what my students say behind my back. So I pulled up the site one day, and I found this:

I really expected to enjoy his course, but I ended up dreading it. He is more interested in his own writing than in teaching. Unimaginably self-absorbed. Thinks very highly of himself and is close-minded toward any opinion that differs from his own.

Ouch. Teachers have always been subject to criticism, and lord knows I’ve endured negative feedback before, but Rate My Professor is a public kind of scolding, and this one stung. It didn’t make me angry. I didn’t stomp around my office. Instead, I just felt sad. This student had showed up, enthusiastic to learn — “really expected to enjoy the course” — and I had failed him or her. I kept looking at the blue frowny-face icon that rated my teaching as “poor quality,” and it seemed to capture my feelings exactly. Not because I thought this anonymous student was wrong, but because I feared this anonymous student might be right.

Although I’d never used it before, Rate Your Professor does offer an area for “Professor Rebuttals.” I don’t like using the word “rebuttal” in this case because it implies something combative between the teacher and the student; however, I thought it might be nice to offer an apology and also mention my hope to see this student in a future class. (I teach at a small liberal arts college, and such a thing could easily happen.) So I logged in and sat down to write. Unfortunately, the Web site only allows you to use 350 characters. What can be said in 350 measly characters? I mean, there are 595 characters in this paragraph alone.

As I struggled to choose my words, I realized my former student also had to think about such restrictions. It made me realize students probably don’t dash off these comments in a moment of wild spontaneity. No. They log in and think about it for a while. They take their time. They probably sip Diet Coke and listen to music. Then they hit ENTER because they want the world to know how they feel. It's that important.

And that’s why I’m writing this today. I need more than 350 characters to give voice to the thoughts swimming around in my mind. So let me go back to the critique and try to explain.

“He is more interested in his own writing than in teaching,” the post begins. This is an astute observation, and although it pains me to admit it, my former student is right. I was hired to teach creative writing, and this means my college expects me to publish. I love this arrangement but, like most professors, I find it hard to balance my life in print against my life in the classroom. This is further complicated by the fact that I’ve been a writer my whole life, but I only became a teacher ten years ago. At my core, I’m a literary artist. It’s who I am. It’s what gets me out of bed in the morning.

Artists are driven and obsessed people. We’re always thinking about our craft, and we can’t turn it off. Don’t believe anyone that tries to tell you otherwise. Even artists who appear serene and gentle — the ones who sip green tea and speak softly — are obsessed. For artists, the world collapses down to a blank sheet of paper, a piano or a spinning clay pot. It’s who we are, and we’re only happy when we’re working on a new artistic problem.

Heck, I even dream about writing. And let me say that my wife is going straight to heaven because whenever I wake up at 3 a.m. to scribble down an idea, I always wake her up, and she drapes an arm over her eyes as I reach for a pad of paper. Our house is littered with notes, and yet she’s unbelievably supportive. I’m a lucky man.

So, yes, my former student is correct: I care more about writing than teaching. However, I worry that this particular critique can be manipulated to read, “He is more interested in his own writing than in stepping out of his office and enjoying a fine summer day.” Being a writer means giving up the “real world” and living in an Empire of Imagination. It’s a monkish existence, but I like it there. I’d rather be in the landscape of a paragraph than hiking around a state park.

This must be why I come across as “unimaginably self-absorbed.” I can see why a student might feel this way, and it probably has much to do with the quiet inner world I inhabit. Plus, I’m an introvert. Strange, no? I mean, if you see me behind a podium, I look pretty outgoing and confident and not shy, but that display of extroversion comes at a high price. I have to close my office door and recharge my batteries. I don’t like being the center of attention for long.

All of this raises a deeper and more meaningful question: Aren’t we all “unimaginably self-absorbed?" I mean, think about it. Each of us only knows the world through our own eyeballs and fingertips and eardrums. We’re all surrounded by this stimulation, and it’s easy — too easy — to feel that we’re the most important creature in the universe. Although we don’t want to admit it, each one of us is in love with the private core of our being. We walk around in our bodies, and we’re thinking about what’s for dinner, or what’s on television, or that bill we still have to pay. It’s so breathtakingly simple to shut each other out.

I’m as guilty of this as anyone, and if you see me walking around campus, I’m probably not thinking about the students I see on the sidewalk. No, I’m probably thinking about letters of recommendation I need to write or that burrito I’m going to eat for lunch. Maybe one of my former students came to my office one day and, instead of helping him or her, I was distracted by news that a colleague had been hospitalized. Or maybe I was thinking about that dumb report the Assessment Committee still needs. Or perhaps I just wanted to leave work early and catch an episode of “Judge Judy.”

Do you see what I mean? Everyone’s self-absorbed. I try to fight against this, but it’s hard. So the next time you’re driving on a crowded freeway or waiting in line for a movie that’s going to start in five minutes, consider how we’re all self-absorbed. Each and every one of us. This is one reason why I like teaching so much — it gives me purpose, it yanks me outside of myself and it’s a daily reminder that I can have a positive impact on the next generation. I’m sorry my former student didn’t see this side of me. It’s the better side of my character.

The critique ends by saying, “Thinks very highly of himself and is close-minded toward any opinion that differs from his own.” Now, here my former student has got it completely and totally wrong. Holy smoke, if only people could see how full of doubt I am. I’m infested by doubt. Am I smart enough to be a professor? Me? There are so many books out there, and I see all these gigantic holes in my education. Truth is, I often unlock my office and I can’t believe my name is on the door. And when I stand in front of a class, I sometimes feel like I’ve fooled the entire academic community because, surely, a dummy like me shouldn’t have a Ph.D. There’s just so much I don’t know. If anything, I think “unhighly” of myself.

Would you like to know another secret about professors? Many of us are like this. We may appear to have our poop in a group but, if we really care about what we’re doing, we’re always wondering how to do it better. We’re filled with doubt and hesitation. It’s part of being human.

Which brings me to the accusation that I am “close-minded.” Oh boy, if only my former student could see how deeply curious I am about life. I’m filled with wonder about other cultures, and I’d love, love, love to spend a few years living in South Korea. How might this change me? Although I was raised Catholic, I’m intrigued by Buddhism, and lately I’ve been reading a lot (I mean a lot) about Judaism. It’s an ancient and beautiful code of ethics. How might these theologies change me? What does Jerusalem look like at dawn?

To be honest, I often wonder whom I might still become. Life is big and grand and we’re all jostled in new directions when we least expect it. I’m only 42 and the world is so vast, so beyond one lifetime of knowing. What other cultures might influence me? I love being in a foreign city getting lost and talking to locals who think differently from me. My former student obviously sees a man who lives in a world of rigid statements, but for me, the question mark is a holy symbol. I worship it.

I can’t always hit a home-run, and I can’t always be a great professor. I love what I do, but sometimes it’s a challenge to balance teaching and writing. So, Former Student, if you ever read this, I hope you’ll take another class with me. Truly. Education is never a one-way street; I learn about life from my students, and that’s one reason I’m writing this today. I’m not just apologizing to you. I am thanking you for making me think deeply about myself.

But I have one last lesson to impart before I hit ENTER and send this out into the universe: Be kind out there. Choose your words carefully. Comments on the Internet last longer than your anger. Always.