Even as a hurricane threatens Republicans' party, you'd be hard pressed to find one who recognizes global warming 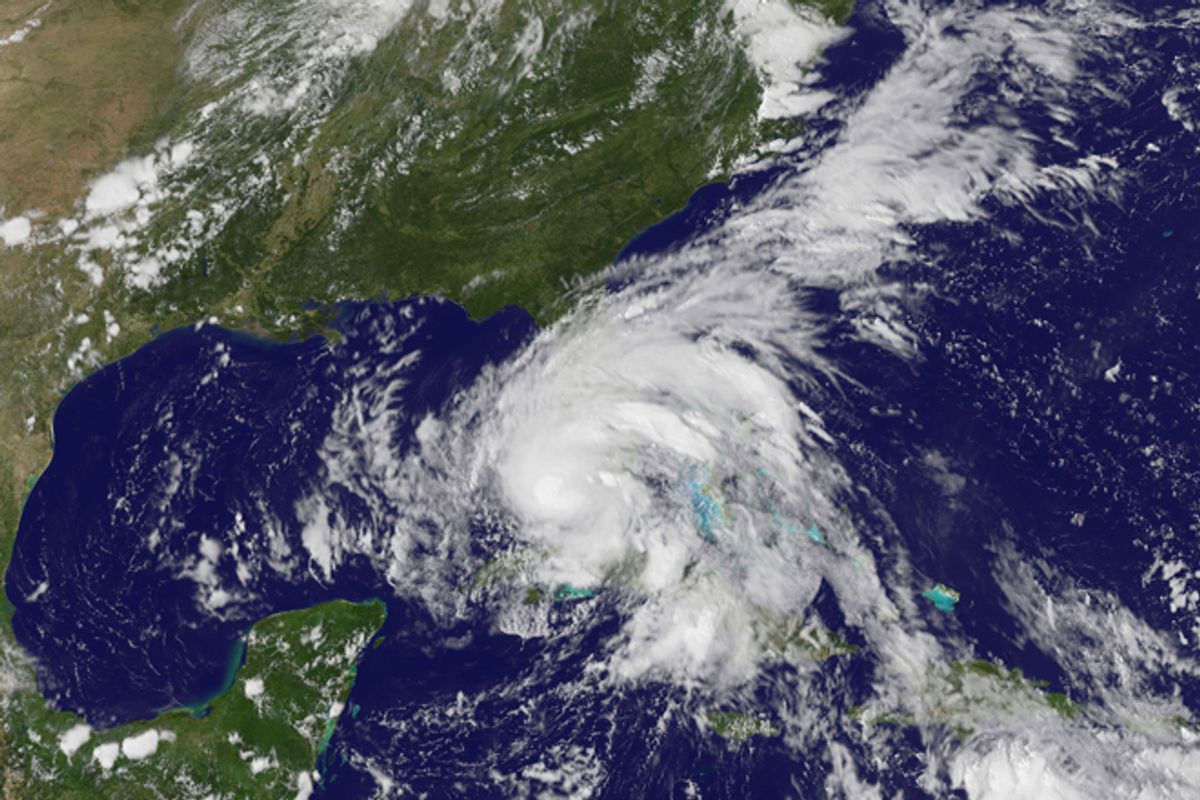 The fact that Hurricane Isaac is threatening the Republican National Convention is not, as some Democrats have argued, evidence of karma.  But it is evidence of climate change — undermining the best efforts of Republicans to deny that it even exists.

Earlier this month, Congress held its first hearing on climate science in more than two years. This was, of course, a hearing in the Democrat-led Senate; the Republican-controlled House wouldn’t even bother.

Senators heard testimony from a top scientist with the Intergovernmental Panel on Climate Change, the leading international body charged with assessing the science and evidence of climate change — in other words, not an activist environmental organization but an independent body that has looked at all the evidence and put forward the consensus view.

“There is no doubt that climate has changed,” IPCC’s Christopher Field told the Senate’s environmental and public workers committee. “There is also no doubt that a changing climate changes the risks of extremes” —  such as the more extreme temperatures, droughts and wildfires we’ve seen quickly increase in this year alone.  And yes, according to a study published in the journal Nature and James Hansen, director of NASA’s Goddard Institute for Space Studies, climate change is responsible for the lengthening of the hurricane season in the United States and increasing the severity and frequency of hurricanes

And yet, after the Senate hearing this month, Republican’s leading climate change denier Sen. James Inhofe declared, “The global warming movement has completely collapsed.” Inhofe has actually insisted that climate change was made up by Al Gore, Michael Moore and Hollywood.

Unfortunately, James Inhofe is increasingly the norm in a party that rejects overwhelming and compelling scientific evidence in apparent knee-jerk desires to cozy up to big oil and oppose everything that President Obama supports. The Romney-Ryan ticket embodies climate change denial at its worst.

After all, when Mitt Romney picked Paul Ryan to appease the far right of his party, it was in part for Ryan’s extreme, anti-environment record. In a 2009 Op-Ed, Paul Ryan wrote that the jury is still out on climate science. Ryan has voted against EPA efforts to regulate carbon dioxide emissions and voted for an amendment to bar the Department of Agriculture from studying how to adapt to a warming planet.  And Ryan, whose wife comes from a family of oil and gas barons, has long supported more oil and gas drilling. In fact, despite his pledges to cut spending, Ryan has voted to preserve government subsidies for the oil industry.

Meanwhile, in typical form, Romney flip-flopped on the subject. Over the course of a few days last summer, he went from telling one audience, “The world’s getting warmer” and “I believe that humans contribute” to saying, “I don’t know if [rising temperatures are] mostly caused by humans." And while the idea of letting companies pay for the right to pollute — also known as “cap and trade” — started as a Republican idea, like the individual mandate in healthcare reform, Republicans loved it before Barack Obama embraced it. As the conservative base is increasingly, fervently anti-climate change, Romney flagrantly changed his position on “cap and trade” to pander to Republican voters.

In fact, the only speakers at the RNC I could find who acknowledge that climate change is a real problem and is caused by human behaviors is New Jersey Gov. Chris Christie, Gov. John Kasich and maybe Condoleezza Rice and Gov. Mike Huckabee.

It’s unbelievable that one of our nation’s two main political parties is so beholden to fringe extremism and oil company cash that it cannot even concede to 97 percent of scientists and every majority scientific body, let alone govern accordingly. Incidentally, even oil companies acknowledge climate change — and see the melting of the polar ice caps as a “great opportunity” for more drilling in the Arctic. But Republicans only seem to see opportunities for oil company kickbacks and pandering to their extremist, anti-environment base.

Republicans are putting on a show in Tampa against climate change while the truth literally rains down all around them. Sooner or later, reality may leak in but by then, the effects of climate change will be too overwhelming to deny — or reverse.