"Inbetweeners" gets a reboot 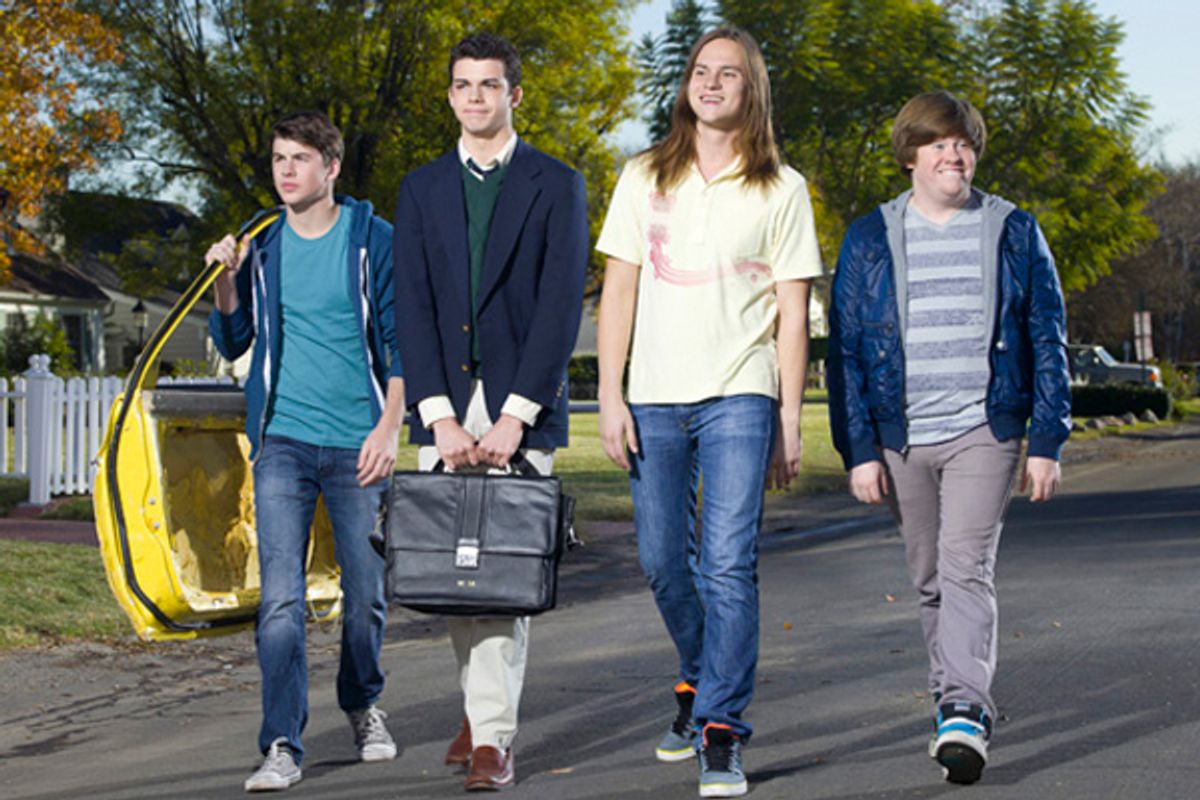 The cast of MTV's "The Inbetweeners"
--

American reboots of British TV shows aren't always awful. I remember Showtime's “Queer as Folk” being quite charming, though a surfeit of waxed, naked men could have had something to do with that. But there's a particular kind of teenager that is unacceptable on American television, and that's one reason why the MTV remake of “The Inbetweeners” (Mondays, 10:30) (watch the first episode and teasers here) will never be as funny as the original show.

“The Inbetweeners” is an award-winning British sitcom (2008-2010) about four suburban virgins who are neither popular nor the school's biggest losers. The British cast reunited for a film (scheduled to open in the U.S. Sept. 7 — trailer here) that catches up with the boys after they graduate, and the original series  is available on Netflix on Demand.

Will (Simon Bird in the original cast) is the new kid, a shrill weenie of a private school refugee who had to transfer to the local public high school when his father ran off with his secretary and left his mother unable to pay the tuition. Will is clever but pompous, and what he lacks in social graces he makes up for in cunning. He manipulates his way into a friendship with lovelorn Simon (Joe Thomas), clueless Neil (Blake Harrison) and horndog Jay (James Buckley), the show's secret weapon.

MTV's version of the show follows the original plots closely, but it's the details it misses, the small gestures that make the characters idiosyncratic and utterly real. And unfortunately for MTV, that's where the comedy lives. The Neils and Simons are interchangeable for the most part, but from the looks of the first episode, MTV's Will (Joey Pollari) and Jay (Zack Pearlman) are all wrong. And there goes the heart of the show.

Pollari's Will (MTV) is a young Tom Hanks, an awkward yet endearing Everyman, a fish just ever so slightly out of water. You get the sense immediately that he'll be fine once he gets to college. Contrast him with Simon Bird, whose British Will is an unabashedly supercilious little prick. Every time Bird opens his mouth he's in danger of being stuffed into a trash can, and yet I can't stop rooting for him to triumph: to think about someone other than himself and his dick, to be kind instead of smart, to know when to roll with things and laugh at himself. He carries a briefcase, for Christ's sake — not the “messenger bag” the beleaguered Pollari carries, but an actual “congratulations for passing the bar exam, grandson!” briefcase, while demeaning auto mechanics and lying about how far he's gotten with the only girl in school who will talk to him, and that alone is worth a punch in the nose. The best teenage characters are selfish, vain, oblivious, predatory image-changers who remind us of our most private and awful selves, not skinnier, goofier versions of the socially acceptable young adults we later become. Incongruity is funny, and we can recognize slivers of ourselves in Will's confident swagger that's thwarted by his arrogance at every turn.

Because it's terribly depressing to want to punch the protagonist and, by extension, yourself in the mouth for 30 minutes every week, Jay offers the release on the cringe pressure valve. Like his friends, Jay is woefully inexperienced with girls, but he lies in explicit detail about all the tail he's not getting. He's relentlessly profane and verbally dexterous in his imaginary exploits, and the juxtaposition of James Buckley's puckish grin — he's absurdly cute, a wide-eyed Kewpie doll — with his R. Kelly imagination makes his lies sound downright innocent, like he's constantly surprising and delighting himself with the porno playing in his head. He tries to leer but it comes out a beam. MTV's Pearlman, on the other hand, is crass but predictable (a reheated Jack Black) with none of Buckley's inappropriate joie de vivre.