Once again, the GOP will make a big show of its minority politicians while trying to mobilize its white, male base 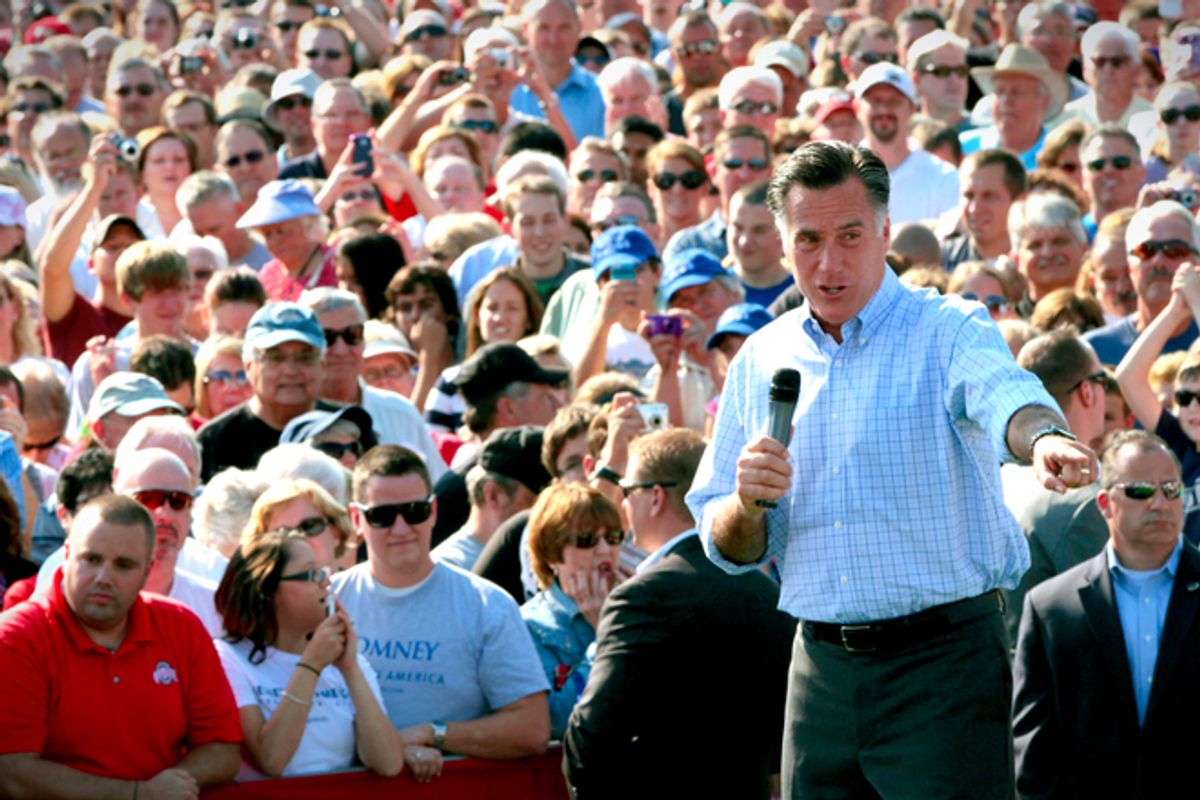 It’s Republican National Convention time again, a quadrennial televised spectacle during which the national party rounds up and then trots out as many minorities and women as possible in an attempt to convince viewers that Republicans have achieved a level of racial and gender diversity that, in fact, exist only during such showcase moments. At conventions past, this charade meant giving Lt. Gov. Michael Steele or Defense Secretary Colin Powell key speaking duties, or deploying Liddy Dole with a microphone in hand to work the aisles of the convention floor, while off-screen the Tom DeLays and Jim DeMints host pricey, off-stage cocktail parties.

On cue, of course, every four years Democrats and liberals sneer that their opponents’ display is a mask donned temporarily by the GOP to obscure its white-male face beneath. Although the Democrats haven’t reached parity either — especially on gender — the Republicans really do lag well behind.

But lately Republicans have posted clear gains in both their ranks of elected women and minorities, particularly during the party’s successful 2010 election cycle. The GOP now boasts two black House members, plus Cuban-American Florida Sen. Marco Rubio. They have record numbers of women in both congressional caucuses: 24 in the House, including nine rookies, and five in the Senate. (There are no black Republicans in the Senate — but then again, neither are there any black Democrats.)

There is also a small cadre of promising, young, minority Republican governors: Latinos Brian Sandoval of Nevada and Susana Martinez of New Mexico, plus Indian Americans Bobby Jindal in Louisiana and Nikki Haley in South Carolina. Tropical Storm Isaac complications notwithstanding, Haley and Martinez are scheduled to speak at the convention, which will also feature former Secretary of State Condoleezza Rice and several Latino party leaders.

These changes aren’t eye-popping, and it’s hard to know for sure if the minority or female representation in the GOP will continue to edge higher or even hold steady. But the sudden uptick in minority and female Republicans is especially noteworthy because it creates a rather curious paradox: The rising diversity among Republican elites comes at the same time the party seems to be retrenching —willingly and strategically, it sometimes seems—toward a more base-oriented, white-male dominated coalition of voters. Yes, the shares of non-white and female Republicans at the ballot box still far exceed the shares found, for example, at congressional roll call. But at the moment the two percentages are moving in opposite directions.

Specifically, the gender gap between the two parties has been growing and shows little sign of reversing for the GOP, which carries a majority of male voters in both presidential and congressional cycles, but struggles to attract female voters, especially those under 60. Despite being from the Southwest, GOP presidential nominee John McCain captured slightly less than a third of the Latino vote; four years later, recent Latino Decisions polling suggests that even if 2012 presidential nominee Mitt Romney attracts all remaining undecided Latinos voters he may do no better and could do worse. And then came last week’s stunning survey result showing Romney at a rock-bottom 0 percent — yes, 0 — among African-Americans which, even by historical expectations for GOP candidates is not just bad but literally as bad as it gets. (In fairness to Romney, the incumbent happens to be the nation’s first black president.)

Not surprisingly, the Democrats will ramp up their racial and gender cueing to new levels at next week’s national convention in Charlotte, N.C. In keeping with their party’s tradition, the DNC’s list of podium speakers is chock-full of minority or female speakers, and some who are both. The Democrats also tout the fact that this year both their convention chairman, Los Angeles Mayor Antonio Villaraigosa, and keynote speaker, San Antonio Mayor Julian Castro, are Latinos — with Castro’s honorific a first for the DNC. To capitalize on the ugly, Rick Santorum- and Rush Limbaugh-led contraception battles that at one point overtook this year’s Republican presidential primary, and twist further the knife Missouri Senate candidate Todd Akin recently inserted into his own party’s back with his “legitimate rape” comments, Charlotte will also feature a platoon of female speakers who can emphasize if not embody the two parties’ divergent positions and records on gender equality, including stalwarts like Planned Parenthood Action Fund president Cecile Richards as well as newbies like Sandra Fluke, the Georgetown Law student whose congressional testimony about contraception insurance led to Limbaugh’s attacks, apology and sponsor defections. Both parties, then, are guilty of a certain degree of window-dressing — but the GOP especially, given its underlying voting coalition.

But window-dressing in August is one thing; building a winning vote coalition in November is quite another. On that score, what’s ironic is that racial and gender parity gains at the top of the GOP are happening at the same time the party is banking on a base-mobilization strategy dependent upon high turnout among men, whites and older voters. Indeed, what Romney and the RNC are hoping for in this year’s presidential cycle is a composite voter profile more typical of midterm elections.

As close observers of electoral politics well know, the turnout differences in recent decades between presidential and congressional cycles — and 2008 and 2010 specifically — are stark. In 2008, the so-called Obama surge electorate was younger, more non-white and majority female: 18 percent of 2008 voters were under 30, while 23 percent were 60-plus; the non-white share was 26 percent; and women were 53 percent of all voters.  But two years later, the 2010 “Tea Party strikes back” midterm electorate was much more favorable to Republicans: Only 11 percent of voters were under 30, 32 percent were 60-plus; the non-white share fell to 22 percent; and women were a slight minority of voters, 47 percent.

Although some very smart analysts, including political scientist John Sides, disagree that Romney is running a base-mobilization strategy, the circumstantial evidence is mounting. Romney has taken base-pleasing positions on abortion, immigration and social welfare spending. In Wisconsin Rep. Paul Ryan, he chose a white male running mate who is popular with conservatives. As Tom Edsall argues in the New York Times, the Romney campaign is using two “racially freighted” television ads to foster a sense of “resource competition [that pits] middle class white voters against the minority poor.” The convention will also feature a gauzy video tribute to the oldest presidential candidate in this year’s field, Rep. Ron Paul, whose followers are almost uniformly white and who had to defend a newsletter he published for years that often included racially insensitive remarks. Most damning, with the American Legislative Exchange Council doing the dirty work, Romney and the Republicans are implicitly if not openly supporting state-level voter ID requirements and other ballot restrictions that would disproportionately disfranchise voters who are younger, poorer and non-white.

Lest a moving speech by Marco Rubio or Susana Martinez fool anyone, understand that Mitt Romney and the Republicans are not trying to unify America, broaden their coalition very much, move to the middle, or traffic in anything like the electoral kumbaya practiced by George W. Bush or Barack Obama in their first bids for the White House. Rather, in these anxious economic times, and despite a new cohort of female and minority politicians, Romney and the GOP hope to grind out a narrow win by building outward from their older, white male voter base. Any window dressing you see at this week’s truncated convention is just that.