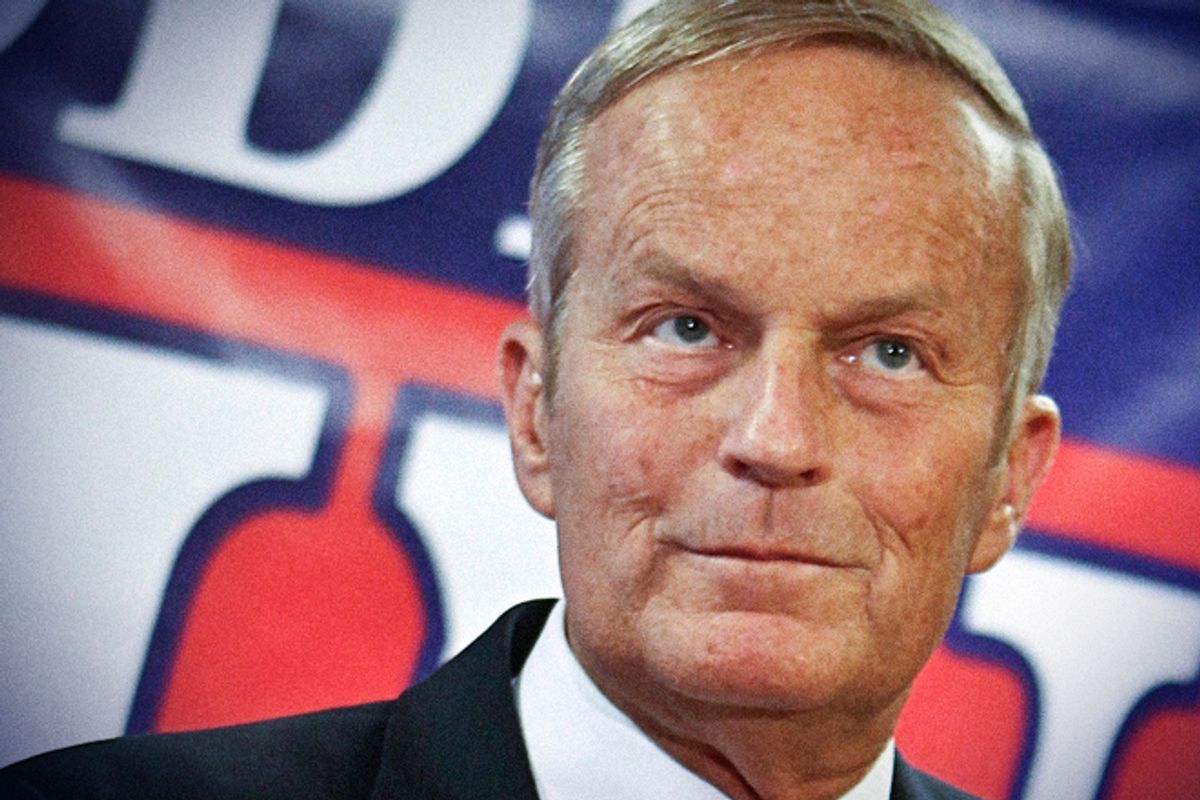 Last week, the country convulsed with outrage over Missouri Republican Rep. Todd Akin’s false suggestion that women who are raped have a special bodily defense mechanism against getting pregnant. Akin’s claim stood out due to its highly offensive nature, but it’s reminiscent of any number of other parallel cases in which conservative Christians have cited dubious “facts” to help rationalize their moral convictions. Take the twin assertions that having an abortion causes breast cancer or mental disorders, for instance. Or the denial of human evolution. Or false claims that same-sex parenting hurts kids. Or that you can choose whether to be gay, and undergo therapy to reverse that choice. The ludicrous assertion that women who are raped have a physiological defense mechanism against pregnancy is just part of a long litany of other falsehoods in the Christian right’s moral and emotional war against science.

In fact, even as Akin reaped a whirlwind of disdain and disgust, a new scientific paper has appeared with uncanny timing in the journal Social Psychological and Personality Science, underscoring what is actually happening when people contort facts to justify their deep-seated beliefs or moral systems. Perhaps most strikingly, one punch line of the new research is that political conservatives, like Akin, appear to do this significantly more than political liberals.

In recent years, the field of moral psychology has been strongly influenced by a theory known as “moral intuitionism,” which has been championed by the University of Virginia psychologist Jonathan Haidt. Dealing a blow to the notion of humans as primarily rational actors, Haidt instead postulates that our views of what is right and wrong are rooted in gut emotions, which fire rapidly when we encounter certain moral situations or dilemmas — responding far more quickly than our rational thoughts. Thus, we evaluate facts, arguments and new information in a way that is subconsciously guided, or motivated, by our prior moral emotions. What this means - -in Haidt’s famed formulation -- is that when it comes to evaluating facts that are relevant to our deep-seated morals or beliefs, we don’t act like scientists. Rather, we act like lawyers, contorting the evidence to support our moral argument.

But are we all equally lawyerly? The new paper, by psychologists Brittany Liu and Peter Ditto of the University of California-Irvine, suggests that may not actually be the case.

In their study, Liu and Ditto asked over 1,500 people about their moral and factual views on four highly divisive political issues. Two of them -- the death penalty and the forceful interrogation of terrorists using techniques like waterboarding -- are ones where liberals tend to think the act in question is morally unacceptable even if it actually yields benefits (for instance, deterring crime, or providing intelligence that can help prevent further terrorist strikes). The other two -- providing information about condoms in the context of sex education, and embryonic stem cell research -- are ones where conservatives tend to think the act in question is unacceptable even if it yields benefits (helping to prevent unwanted pregnancies, leading to cures for devastating diseases).

In the experiment, the subjects were first asked about their absolute moral beliefs: For instance, is the death penalty wrong even if it deters others from committing crimes? But they were also asked about various factual aspects of each topic: Does the death penalty deter crime? Do condoms work to prevent pregnancy? Does embryonic stem cell research hold medical promise? And so on.

If you believe some act is absolutely wrong, period, you shouldn’t actually care about its costs and benefits. Those should be irrelevant to your moral judgment. Yet in analyzing the data, Liu and Ditto found a strong correlation, across all of the issues, between believing something is morally wrong in all case -- such as the death penalty -- and also believing that it has low benefits (e.g., doesn’t deter crime) or high costs (lots of innocent people getting executed). In other words, liberals and conservatives alike shaded their assessment of the facts so as to align them with their moral convictions -- establishing what Liu and Ditto call a “moral coherence” between their ethical and factual views. Neither side was innocent when it came to confusing “is” and “ought” (as moral philosophers might put it).

However, not everyone was equally susceptible to this behavior. Rather, the researchers found three risk factors, so to speak, that seem to worsen the standard human penchant for contorting the facts to one’s moral views. Two of those were pretty unsurprising: Having a strong moral view about a topic makes one’s inclination toward “moral coherence” worse, as does knowing a lot about the subject (across studies, knowledge simply seems to make us better at maintaining and defending what we already believe). But the third risk factor is likely to prove quite controversial: political conservatism.

In the study, Liu and Ditto report, conservatives tilted their views of the facts to favor their moral convictions more than liberals did, on every single issue. And that was true whether it was a topic that liberals oppose (the death penalty) or that conservatives oppose (embryonic stem cell research). “Conservatives are doing this to a larger degree across four different issues,” Liu explained in an interview. “Including two that are leaning to the liberal side, not the conservative side.”

There is a long-standing (if controversial) body of research on liberal-conservative psychological differences that may provide an answer for why this occurs. Conservatives, Liu notes, score higher on a trait called the need for cognitive closure, which describes a feeling of discomfort with uncertainty and the need to hold a firm belief, a firm conviction, unwaveringly. Insofar as a need for closure pushes one to want to hold coherent, consistent beliefs -- and makes one intolerant of ambiguity -- it makes sense that wanting to achieve “moral coherence” between one’s factual and moral views would also go along with it. Conservatives, in this interpretation, would naturally have more conviction that the facts of the world, and their moral systems, are perfectly aligned. Liberals, in contrast, might be more conflicted -- supportive of embryonic stem cell research, for instance, but nourishing doubts about whether the scientific promise we heard so much about a decade ago is being realized.

In documenting an apparent left-right difference in emotional reasoning about what is factually true, the new paper wades into a growing debate over what the Yale researcher Dan Kahan has labeled “ideological asymmetry.” This is the idea that one side of the political spectrum, more than the other, shows a form of biased or motivated assessment of facts -- a view that Kahan rejects. Indeed, he recently ran a different study and found that liberals and conservatives were more symmetrical in their biases, albeit not on a live political issue.

The question of why some researchers find results seeming to support the left-right asymmetry hypothesis, even as others do not, remains unresolved. But the new paper by Liu and Ditto will surely sharpen it. Indeed, Kahan has already weighed in on the paper, acknowledging that it provides evidence in support of asymmetry, but observing that in his view, the evidence against asymmetry from other research remains more weighty.

The upshot, for now, is that it’s hard to deny that all people engage in goal-directed reasoning, bending facts in favor of their moralities or belief systems. But -- to butcher George Orwell -- it may also be true that while all humans are biased by their prior beliefs and emotions, some humans are more biased than others.