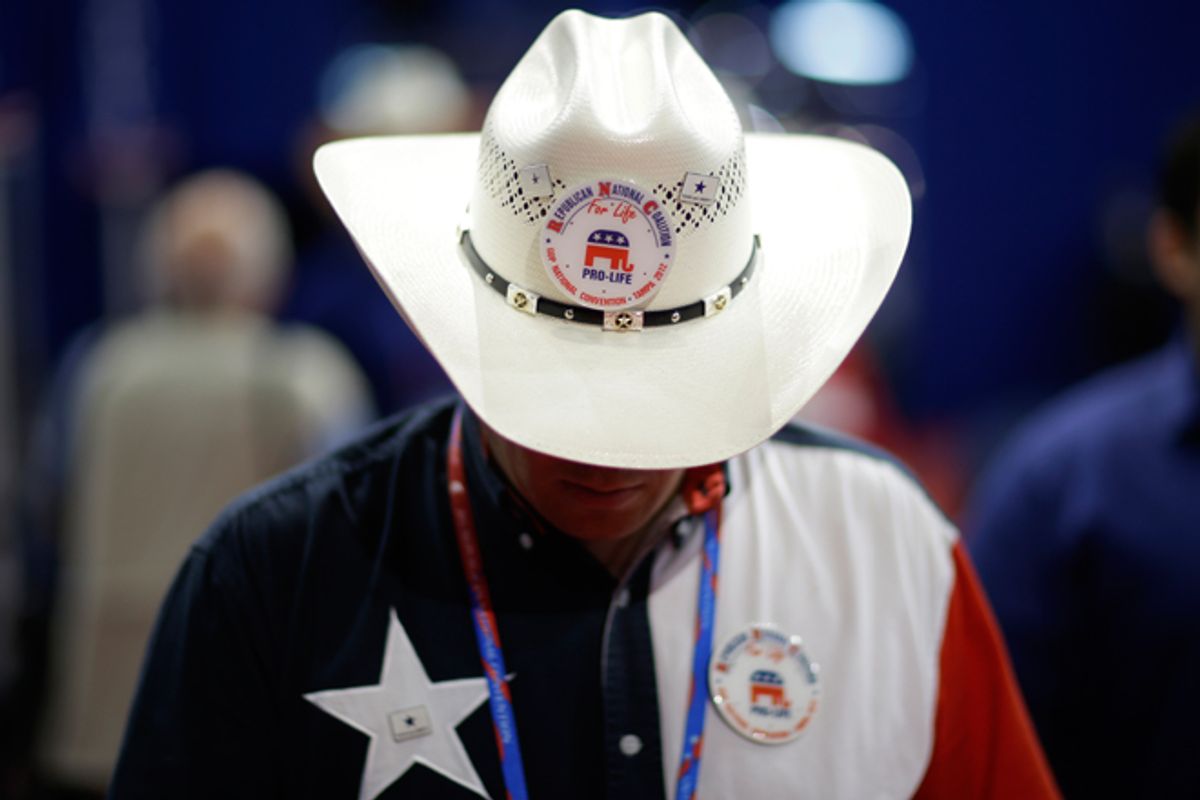 A Texas delegate on the floor of the Republican National Convention in Tampa, Fla. (AP/David Goldman)
--

TAMPA -- Tightly controlled political conventions are all about getting the entire party singing from the same songbook, but one of the country’s largest states, rock-red Republican Texas, could upset the chorus as the delegation is preparing to go to war with the Republican National Committee over a rules change that they say could sideline grass-roots activists and concentrate party power in the hands of wealthy donors.

“This is the hill to die for,” Texas delegate Tom Washington, the sssistant treasurer of the state party, told Salon on the convention floor. It’s “disgusting and disturbing,” said at-large alternate delegate Mark Russo from Rockwall, Texas.

The change, approved last week by the Rules Committee, which convened here in Tampa before the convention began, would allow a presidential campaign in future elections to veto any delegates sent to the national convention to support its candidate. While we usually know who the party's nominee will be long before the convention, it's not official until delegates vote on selecting the ticket at the convention. Delegates are elected in local and state nominating conventions, and then sent to the national convention assigned to presidential candidates based on the proportion of the vote each candidate won in the state. Opponents of the rule change fear this would allow the winning candidate to disavow elected delegates and stack the convention with big donors and loyalists who could change rules, write the platform or otherwise take the party in a direction that grass-roots activists wouldn’t support.

The opposition seems to have started with supporters of Texas Rep. Ron Paul, who have rebelled against several aspects, but has spread to the entire delegation from the Lone Star State. “This is very distributing to me. Even though I’m a Romney supporter, this is bad policy for this convention, it’s bad policy for future conventions,” Richard Hayes, a Romney delegate from Denton, told Salon. “The Texas delegation is rock-solid in defeating this rule and supporting the minority report,” said Washington, who is not a Ron Paul supporter.

Currently, campaigns don’t have much say over who comes to nominate them at the convention, and delegates are often the on-the-ground grass-roots activists who put in the most time and shoe leather to support the party. But members of the Texas delegation, and they say other delegations as well, worry the new rule would change that. “Over the long run, we could foresee, after a few election cycles, the national convention is going to be comprised mainly of the biggest donors to the winning campaign, instead of the rank-and-file Republicans,” said John Larson, a Ron Paul delegate from Webster, a suburb of Houston.

Delegates said a Romney lawyer came down to Tampa Friday to present the rule and ask that it be approved by the committee. "I don't see how you could say that it has anybody else's fingerprints all over it, other than Romney's," said Washington. Still, he insisted, “This is not a push against Romney. This is a push to save the grass roots of the party.”

While the rule was approved by the committee last week, opponents are trying to get a dissenting minority report published, for which they need 29 votes out of 100 total, with two votes per state. Washington said they were within one vote of passage, but that supporters of the rule had launched a parliamentary maneuver to shut down debate on minority report and thus prevent its passage. Texas has led the revolution, the delegates said, because the Tea Party and Ron Paul-influenced state party has been aggressive about coming early to convention to participate in the rulemaking in order to try to exert bigger influence on the national party.

Asked for comment as he was leaving the convention center this afternoon, Republican National Committee Chairman Reince Priebus threw up his hands and said, "No comment on that." Asked if he expected a floor flight on the issue, he replied, "Nope."