At the RNC's Woman's Pavilion, allowing women to make their own healthcare choices is considered an act of war 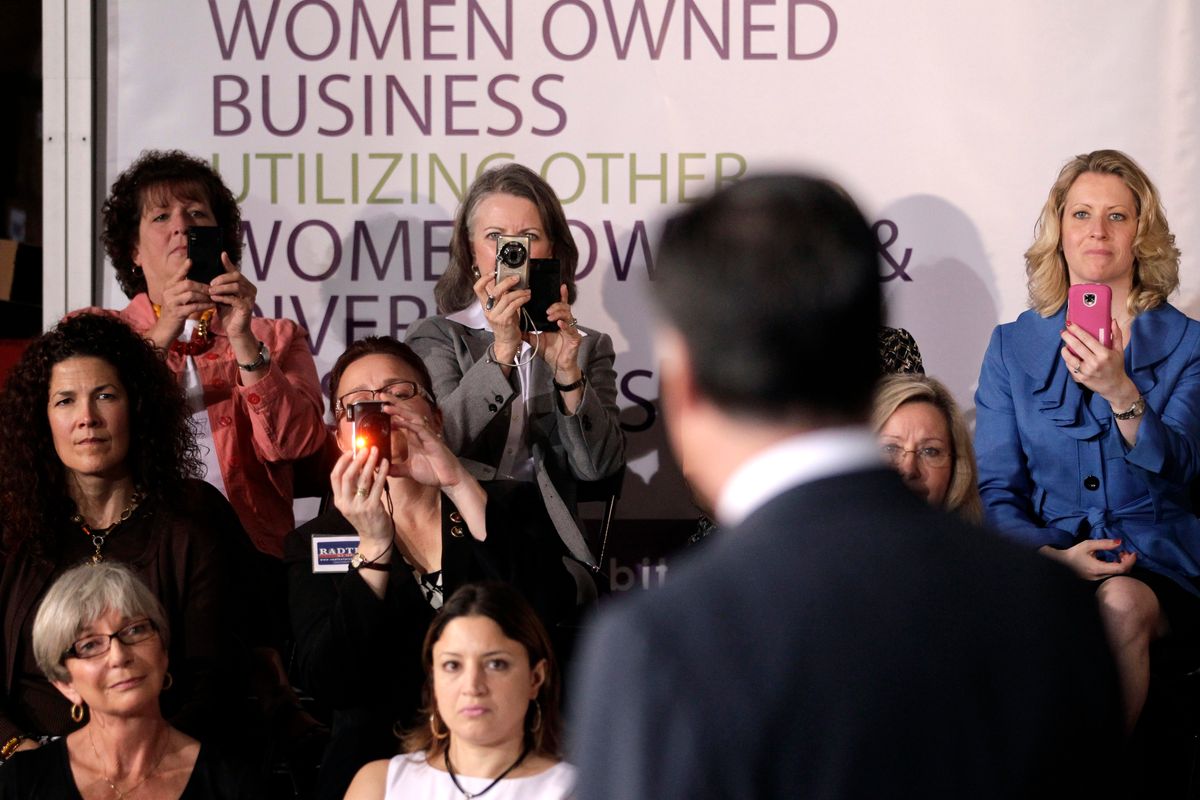 TAMPA --  "Sometimes these men will say something and you're just like, ugh, you know no woman would ever say it, and it's like men don't even understand that there was a problem with what he said," says Mary Anne Carter, holding an exasperated hand to her forehead.

We're perched on a curved, white pleather couch, surrounded by red and pink carnations, at the YG Network's Woman Up! Pavilion of the Republican National Convention. Carter is in charge of this operation, which she describes as "a space for women" and believes to be the first of its kind.

And of course, we're talking about Todd Akin.

"I will just say this," Carter says. "No woman would ever use the term 'legitimate rape.' That's what I think." There are other examples of clueless men, she says, though she can't think of any at the moment. When she says she used to work for Jon Kyl, I ask what she thought about his comments about Planned Parenthood being 98 percent abortions and then that was "not intended to be a factual statement."

She doesn't remember that:  "I ignore a lot of stuff men say when it comes to women's issues."

What, exactly, women's issues are is still a point of contention here at the RNC. The Obama campaign, in seeking to widen its advantage with female voters, has been pretty clear on what they are:  women's preventive care, including birth control; federal funding for Planned Parenthood; equal pay legislation, and so on. For months, the Romney campaign and conservatives have been repeating that there's no such thing as a woman's issue, except that women care about the economy and gas prices.

Carter says this too: "The idea that contraception is the only issue women care about is absurd."

So alongside the salon services (at a charge) and the tampons and pads in the bathroom, the Woman's Pavilion program includes panels that are resolutely not gendered: "Hey America! Don't Take This Road: The Europeanization of the United States," and on possible cuts to defense spending. ("The military employs thousands and thousands of women," says Carter.) A panel titled "Lost in Space: The Future of NASA and America's Role in Space Exploration" was manually crossed out on the schedule. Carter says the topics were drawn from focus groups she conducted with politically persuadable women.

When she realized that Aug. 26 was the anniversary of women's suffrage, they put together a small homage to the female vote. "Elizabeth did her master's thesis in women's suffrage," Carter says brightly.

She says the key is women talking to women in ways women can relate to. "They tend to talk analytically," she says of men. "You hear facts and figures, sometimes you have to break that down to what it means to you personally." An example, she says, is that women in the focus groups didn't see "energy" as an issue until they connected it to gas prices.

The only problem the Republican Party has with women, she says, is messaging: "Our rhetoric is wrong. Our policies are right." She smiles. "There are things we could say to each other that women would understand and men wouldn't."

As for the "war on women," Carter retorts, "I would say the current economic standing of the United States is a war on women. I would think that the current healthcare bill that may or may not be repealed -- I don't want to call it 'Obamacare' but I can't remember the name of it -- is potentially a serious war on women, allowing women to make their own healthcare choices."

What, I asked her, would be harmful to women about the Affordable Care Act? A breast cancer survivor, Carter cited a federal task force that in 2009 recommended that women in their 40s get mammograms every other year instead of annually. But those recommendations have no bearing on the Affordable Care Act, which actually requires insurance companies to cover mammograms fully as preventive care.

"I think the media helps the left issues like contraception and abortion because the media likes those issues," Carter concluded. So was she annoyed at the numerous bills introduced by the Republican-controlled House of Representatives that were focused on those two issues?

She sighed. It wasn't the first time. "I don't know why Congress does what it does sometimes," she said. "But I do know that we have great women talking about the issues that matter."