Bachmann, Perry, Santorum and others take a victory lap -- and say happy birthday to Phyllis Schlafly 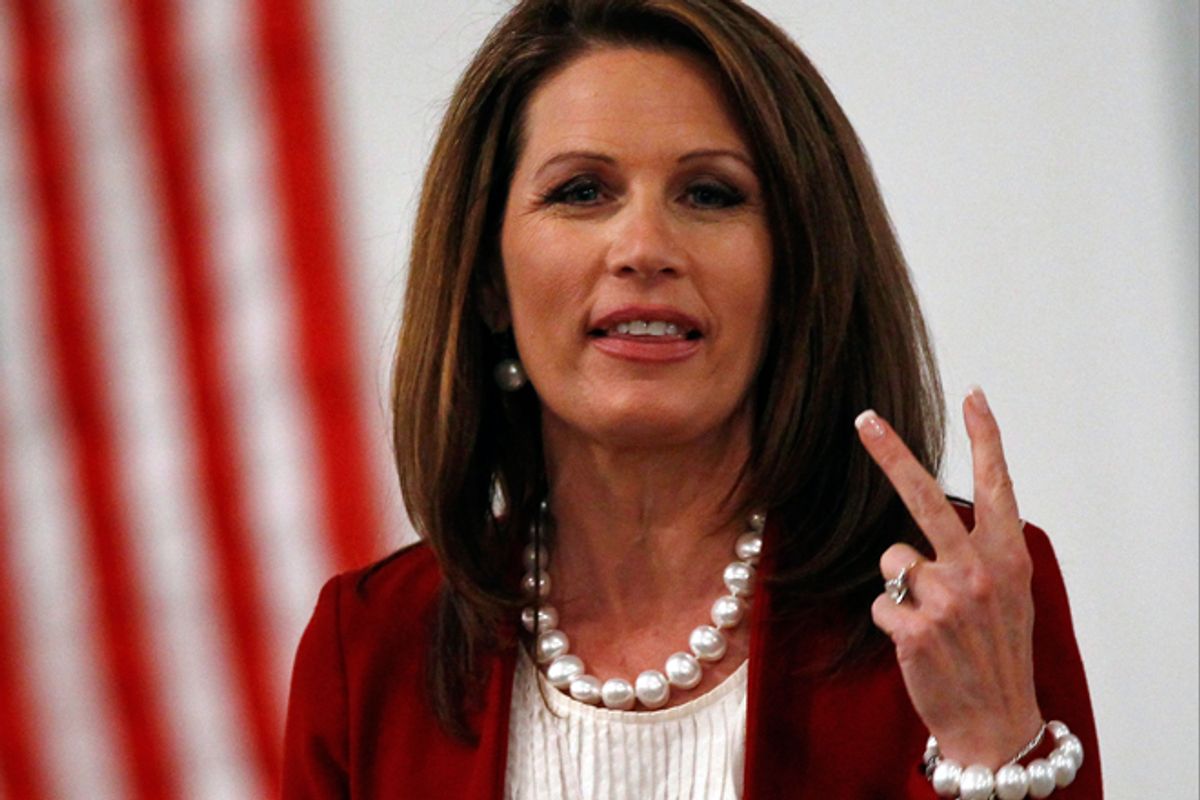 TAMPA -- "For the first time in human history we have full taxpayer funding of abortion," Michele Bachmann said today at the "Treasure Life" luncheon held by the Republican National Coalition for Life and Family Research Council Action. She went on, "Never before have we seen a denial of our religious liberties. When President Obama told the Catholic Church they had to deny their sincerely held religious beliefs and take on his beliefs, that's not what our system of government is, that's not pro-life."

The "taxpayer funding" part is transparently false -- the Hyde Amendment, named after a congressman reverentially celebrated at the lunch today, prevents almost all federal funding of abortion, and the Obama administration hasn't changed a single thing about that, in the Affordable Care Act or elsewhere. No one else tried to make a similar claim, nor did anyone else seem particularly excited about that act's contraceptive coverage mandate, either -- it was the only time it came up.

It was a rare moment of red meat and dark warnings. Instead, under the firm control of RNC for Life and the Eagle Forum's Phyllis Schlafly -- whose 88th birthday was being celebrated -- the lunch was resolutely optimistic and mostly focused on the argument that both political momentum and science are on the antiabortion side. Every attendee I spoke to was resolute, if unenthusiastic, in their support for Mitt Romney, despite his careening on abortion; their faces lit up when asked about Paul Ryan.

"We have more pro-life members of Congress than ever before in modern times," said the Family Research Council's Tony Perkins. "Those who would want to move the Republican Party away from life are swimming upstream." (He also offered a retort to those who said the election was only about the economy: "If you don't first have life, a job doesn't matter.")

Honoree Rick Perry cited a Gallup poll that showed that "fewer Americans believe abortion should be legal since they began tracking this issue." (That's not quite accurate: The number of people who think abortion should be legal has held steady, but the number of people calling themselves pro-life is at a peak.) And he got the most enthusiastic reception in the room, perhaps because he has the most to show recently for his antiabortion record, including the most extreme ultrasound law in the country and his resoluteness on defunding Planned Parenthood.

"For many years," said another honoree, Rick Santorum, "it looked like we weren't winning." He added, "That changed when the pro-life movement began to change and mature." He pointed to the proliferation of crisis pregnancy centers around the country, which he said evinced a "face of love" that showed concern for a pregnant woman in addition to the fetus.

"The pro-life movement has always been about love, but for far too long we thought the pro-life movement was only about the child in the womb," he went on. "But of course that's not true. What we did was put our heart into action by being out there on the front lines, loving and embracing the mom and the grandmom and the father, hopefully, and the family, who are going through a horrible time. And that has made all the difference."

That's where "science" kept coming in: Abortion opponents remain convinced that if women only knew more about fetal development, if they saw ultrasound images and listened to heartbeats, they would change their minds, although there's no evidence for this. (We do know mandatory ultrasounds often come with added delay and expense for a woman seeking an abortion.) As Santorum put it, "Everything is visual. You can't deny the reality of life in the womb."

Schlafly, brightly clad and standing before a layer cake wishing her a happy birthday, is widely credited with making sure that the official platform of the Republican Party remains banning abortion without exceptions. As the event closed, she repeated the sentiment of the entire event: "We're winning. We're on the winning side."