Addicted to a younger man

I'm old enough to be his father. He's engaged to a woman. But once, we were intimate -- and now, we can't let go 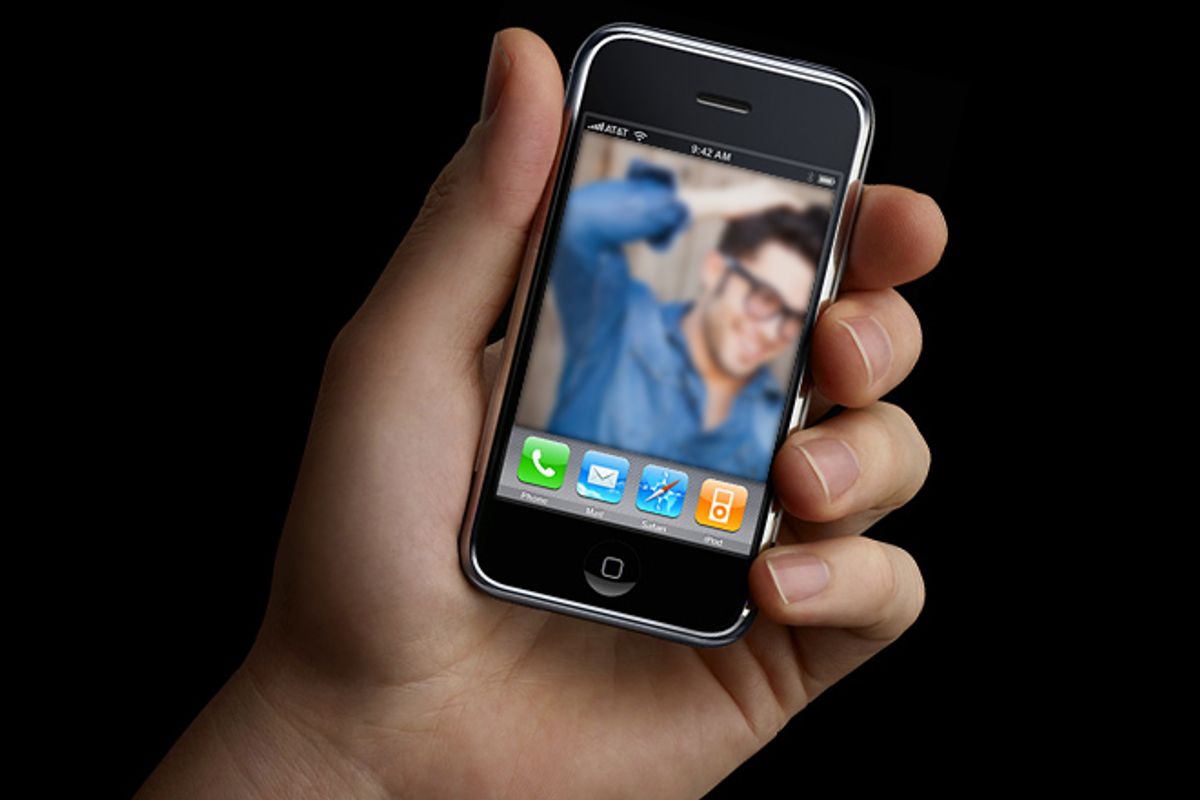 I’ve never had much sympathy for addicts. Many years ago, when I discovered that my first significant boyfriend was hooked on cocaine after receiving a call from an emergency room at midnight about an overdose, I broke up with him. My anger, in part, resulted from the thousands of dollars I kept “lending” him, never understanding why he needed the money, the increasing turmoil in his life, and what I perceived as his chronic weakness. After he’d lost his job on Broadway, was evicted from his apartment and disappeared for three days after being on the run from a murderous drug dealer, I walked him to Penn Station at 6 a.m., bought him a one-way ticket home to Virginia, and didn’t leave until I saw the train vanish into the tunnel. And that was the last of our life together in New York.

With such haughtiness I used to dismiss cigarette-smoker friends who would need to leave my dinner parties to huddle on my building’s roof deck in the rain to light up, or partners of friends who would get drunk every time we went to a restaurant. I would dismiss the typical American Wal-Mart shopper, so fat that he or she needs to drive a motorized cart to negotiate the aisles.

But as a middle-aged man, I now understand addiction. Mine is, perhaps, more inexplicable, in that it’s not so easily labeled as chemical. I prefer the more ambiguous term, existential. I have been addicted to a young man.

And whenever I think I’ve broken the addiction, that it’s been rendered inert, I discover that it remains as potent as ever. At this point, I can’t say my addiction is about having sex with him, because he no longer allows that or, at least, the full expression of it we once shared. I can’t say it’s about his company, because now that he lives in a far uptown Manhattan neighborhood with a woman to whom he is engaged, we see each other only on rare occasions and most of the talk centers on him anyway. But I can say that it’s about the potential for intimacy, which remains between us whenever we do get together, an interaction so charged that, on one occasion, he broke my rib — a fact I continue to cite with a kind of bravado and pride. I can also say the addiction is about craving the adoration a young, handsome man, smart enough to be pursuing (let’s say for the purposes of disguise) a Ph.D. in European art history (the Dutch Golden Age). I am old enough to be his father. I don’t want to let that adoration go, I don’t want it to end, nor do I want to stop bestowing the adoration on him that he craves. He is my substance for abuse. And after every fix of him, I am baffled by my own weepiness and despair.

I can go for months without seeing or contacting him — and if I do think about him, I am convinced that I am immune to his powers, that they have dissipated. But the moment he texts or calls, I am infused with longing. Recently, I was walking with a friend along Manhattan’s High Line park on a weekday afternoon, feeling optimistic about my new work life as a freelancer after being laid off from a job as senior editor at a magazine, when my BlackBerry dinged. “I’m missing you,” the young man said and he added that momentarily I would be receiving a photograph of him with a new haircut he had just received — the stylist was just about to take the picture. When the shot of him downloaded in all of its narcissistic splendor, with him standing provocatively against a red-brick wall, looking the way a handsome young man with a dashing new haircut is expected to look, I waved my phone to my friend, whose enthusiasm for the young man’s beauty inspired mine.

“How could anyone our age resist that,” my friend said, a remark that managed to both flatter and sadden me. Hearing the sheer passion expressed by my friend ignited my own.

“Can’t we see each other?” the young man asked. “I’ll be a bachelor this weekend.”

Later, the same friend I had been coursing the High Line with coached me on how to negotiate the Saturday evening, when the young man would be coming over for a drink. “Don’t hug him at the threshold,” my friend said. “Don’t touch him, let him want you, make him jealous with talk of others you’ve been with.”

Not exactly novel advice, but advice I needed to hear. I followed those directives well — for two hours. But after the young man stood beside me at my window to share the view of the East River as a barge slid by, its hull emblazoned with the name “Halifax,” a black Lab running up and down its deck barking at the shorelines, and he put his arms around me, I took the fix. And it brought immediate relief, tinged simultaneously with regret.

Later, he handed me his phone to scroll through photos of the fiancée. There they were arms around each other in a Provencal field of lavender, she and he and the new happy in-laws at the base of Mount Rainier with a roll of fog approaching, the two of them on the hard-packed sand of Oak Street Beach in Chicago, my hometown, backdropped by the infinite blue of Lake Michigan. He logged on to his Facebook page to show me additional photos of himself, one of them taken at 4 a.m. in my apartment when we had been involved. I knew that no matter what would happen over the course of the evening that it would likely be our last bout of intimacy because despite the apparent, but ever-denied, indecisiveness he feels about his sexuality, he is decided in his monogamy and belief in adhering to the tenets of his increasingly conservative embrace of his religion.

Hours more of hugging and cooing and nuzzling, mutual declarations of love, (clothed) photos of him by the window, illuminated by candlelight, I found myself getting angry. Which is what an addict feels when he knows that the source of his happiness/unhappiness assumes power over him again. All of the elements a person in love or lust could want were there — affection, admission of love, beauty, youth, devotion, adoration. But, ultimately, none of them were really available to me. They were and are ephemeral.

He will forever be an enigma in my life. His ability to say he loves me, yet love and enthusiastically bed women violates all of the rules I thought I knew about a person's sexuality. I know nothing. It's as if I can no longer make any pronouncements about the behaviors of gay or straight people again. I do know, though, that much of the bafflement I feel in his company is simply a response to seeing someone still so young and smart about to embark on decades of life I have already lived. I think about what he must be thinking about the assessment of my life — how it is that I have just two-and-a-half rooms of an apartment filled mostly with books and inexpensive paintings, that I work as a freelancer who didn’t wind up running a magazine or publishing house or winning the Pulitzer, how I don’t have children or a country house or in-laws thrilled to have me loving their daughter or son. But then I think of Jackie O who said, “In the end all you really have are happy memories.” I have and continue to get a good store of those, and the young man has been one of the sources.

Why does he keep coming back to me? Because I show him an unabashed adoration he does not get from his girlfriend or prior other young women. The intimacy we once shared and still talk about and reimagine is different than is available to him with women. He is fundamentally insecure about how tall he is and, perhaps, his attractiveness, insecurities that I remedy, if not exploit. He misses the adventures we seemed to have whenever we would go to an after-work press party or a gallery opening. As a restaurateur once said to us as we dined at her establishment, “What’s the subtext here with you two” — an odd phrase that the young man and I continue to cite. He tells me that one of the central differences between the affection we show each other and that he shows women is that with a man he can hold me as tightly as he wishes, without causing harm. “With my girlfriend, I have to be so careful — and I have to be the one in control. With you, you’re the one in control.”

I can’t answer or solve the crises of his still-young life, but like any addict, I know that the only cure for me is to not see him. I can’t yet say I can abide by that. Different addictions require different fixes, but the one thing every form of addiction has in common, I think, is the craving for connection. With drug and alcohol addicts, it’s, in part, the desire to ingest a chemical that allows the user to communicate with, connect to, a state of being he or she wants to occupy. Because my addiction is for another person, I feel a near-constant need to write the young man, to text him, call him for that hit that will connect us.

He asked if I would attend his wedding, but I didn’t answer yes or no. Perhaps to see him wed might be my cure. Plus, it would mean another chance to see him.