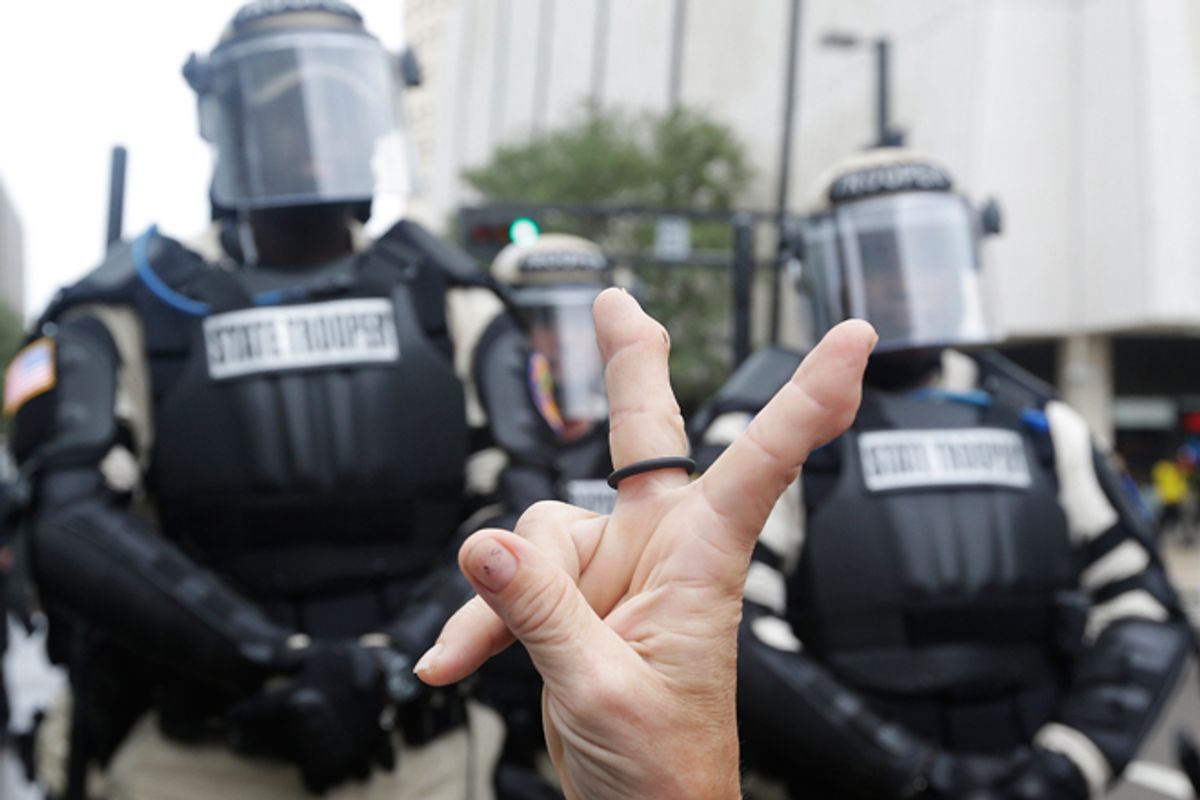 An odd thing happened Monday night in the Ybor City section of Tampa, where sports jacket-clad Republicans from across America congregated to imbibe their cocktails and gossip their gossip. As I (unsuccessfully) attempted to negotiate my way into the Daily Caller party, I heard a familiar cacophony of sounds approaching from the west: the cries and chants of a bona fide Occupy march! What fun! I quickly determined that following this coterie throughout Tampa's historic district would be much more edifying than hanging out with Tucker Carlson and crew, so accompanied the procession.

As we advanced down 7th street, a contingent of largely uninterested law enforcement personnel closely followed; attempted conversations with these individuals were mostly in vain, but one officer by the name of Smith revealed that despite the fact they were all wearing the same generic beige uniform, they represented an assortment of different county sheriff's departments from the surrounding region. (Some recorded protesters via videocam.) Smith himself hailed from neighboring Pasco County, he told me, declining to provide a first name. “I'm just hot,” the young officer said, rightly bemoaning the thick Florida humidity. “They should do this in February, when it’s like 60 degrees.”

“I’m so glad you’re not the NYPD!” one protester proclaimed.

The cadence of the march, which took fully to the streets in defiance of vehicular traffic, would have been familiar to anyone accustomed to the ways of New York City Occupy activity. Protesters chanted, “We. Are. The source of all your wealth!” in the cadence of the classic “We. Are. The 99 percent!” refrain from Occupy days of yore. At least two busloads worth of rabble-rousers had traveled to Tampa from the movement’s birthplace, though turnout was somewhat depressed due to concerns about Hurricane Isaac, reported George Ehrhart, an NYC occupier who rode down on one of said buses. (He also predicted to me that the anti-RNC protests would beget more violence than the anti-NATO protests earlier this year in Chicago: “Everything is swirling around in just such a way.”)

There was also the characteristic aimlessness and uncertainty of Occupy marches, including uncertainty as to who comprised the participants. “So, would you say this is an Occupy thing, per se?” I asked one marcher. “Good question,” he said, laughing. Folks sitting outside the Green Iguana restaurant on 7th Street applauded and offered thumbs up. “Don’t put us on Facebook!” one yelled at me cheekily.

After an hour or so, bike-bound officers blocked off most available routes and the festivities fizzled. Some protesters accepted this reality, but others were indignant, hoping for additional fireworks. “What the fuck is wrong with you guys?” an anarchist woman exclaimed. “We’re on a fucking march!”