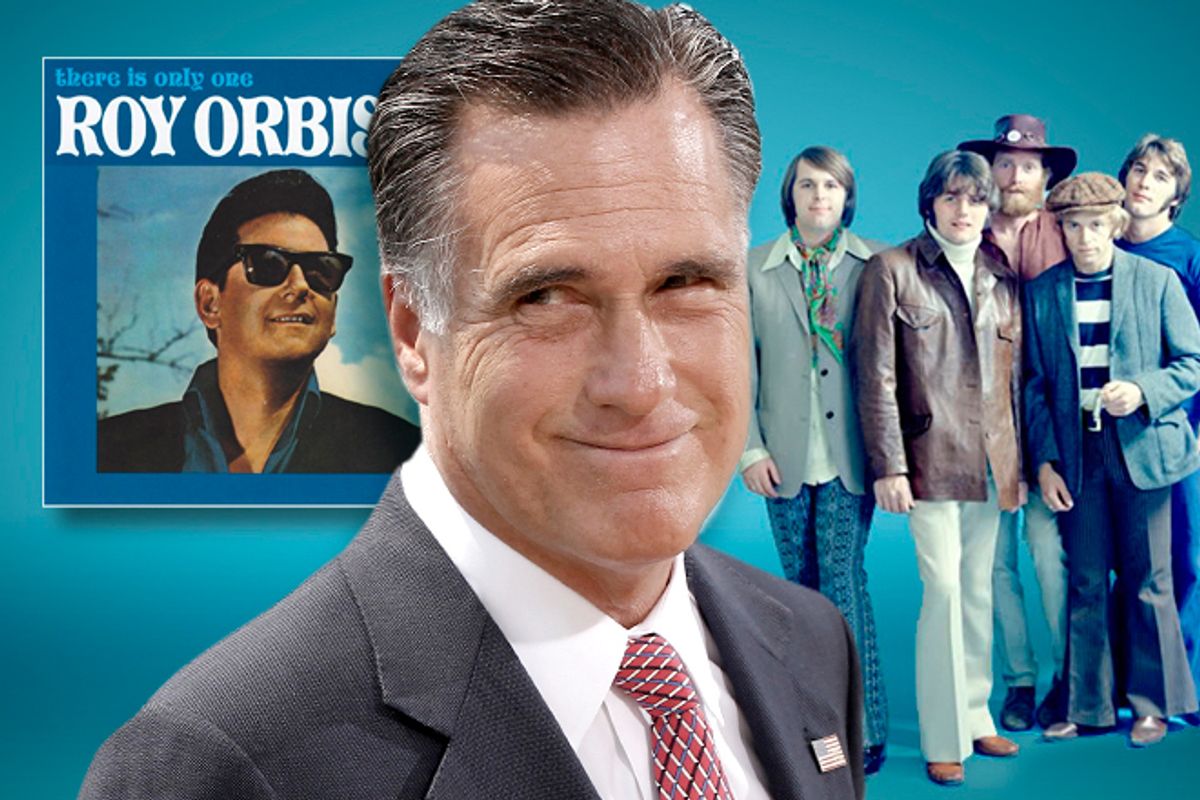 Barack Obama has pretty good taste in music. Bill Clinton swaps playlists with Bono. But when Mitt Romney gets asked about his favorite bands, he appears to grasp at straws, trying to sound appropriately Republican and presidential and yet somehow in the know. Alabama! Toby Keith! The … Killers? They're a thing, right?

Romney is an undeniable square, even without comparisons to the president. And yet a very subtle campaign is being waged to signal that Mitt, despite all pleated, Costco evidence to the contrary, has soul.

Not the sexful kind of soul, of course. A particular kind of safe, white-guy boomer soul, like a deleted scene from “The Big Chill.” His sons confide to Diane Sawyer that dad loves Roy Orbison, that he sings along to “Crying” at home. And when Parade asked the Romneys which bands they'd host in the White House, Mitt's first response was so breathless you could smell the stamp glue on the fan letters of his youth: “I would certainly want to hear from the Beach Boys.”

While we're waiting for those old tax returns, let's look at these records instead. If the secret playlist of Mitt Romney's heart indicates anything, it's that he knows pain. Well, not your pain. Romney's not about to fire up “What's Going On” any time soon. And reverend or not, Al Green's likely a bit much too.  What the Beach Boys and Roy Orbison signify is a quiet, chaste heartache, the kind you stoke on rainy mornings before the rest of the house is awake, before you put on your bossman pants and go privatize Social Security.

Being a Roy Orbison fan means you're always in mourning. Orbison might have come up with Jerry Lee and Elvis, but even at his most jaunty, going on an Orbison tear is more likely to incite staring down the neck of your sixth (root) beer and sighing than making out on top of the pool table or setting anything on fire. Even “Pretty Woman,” a courtly cat-call with a killer riff, brims with longing for what might have been. It's an anthem for the unfulfilled. Mitt might have been suckered into “Crying” for its proto-slow jam smooth strings, but Orbison's soaring wail in the chorus is sheer glorious pain. It's opera for the guy who wants to defund the NEA.

And the Beach Boys. Mitt might know less about surfing than even Brian Wilson — he's a Winter Olympics man, after all. And real beach bums skip straight to Jimmy Buffett, anyway. But if Mitt loves the Beach Boys that much, what he longs for isn't a surf shack full of tanned California girls and innocent harmonies, it's the comfort of a dark bedroom, a stack of lonesome 45s and the surf sound setting on his white noise machine. The implied melancholy of “Wouldn't It Be Nice?” and “In My Room” is obvious, but it's also not hard to see how a guy who could have a dozen little deuce coupes cooling in the garage might find himself kind of empty at the end of a long day.

Why so sad, Mitt? He might not even know himself.