When I sent my kid off to school with tampons instead of a snack, I had to wonder how I was going to make this work 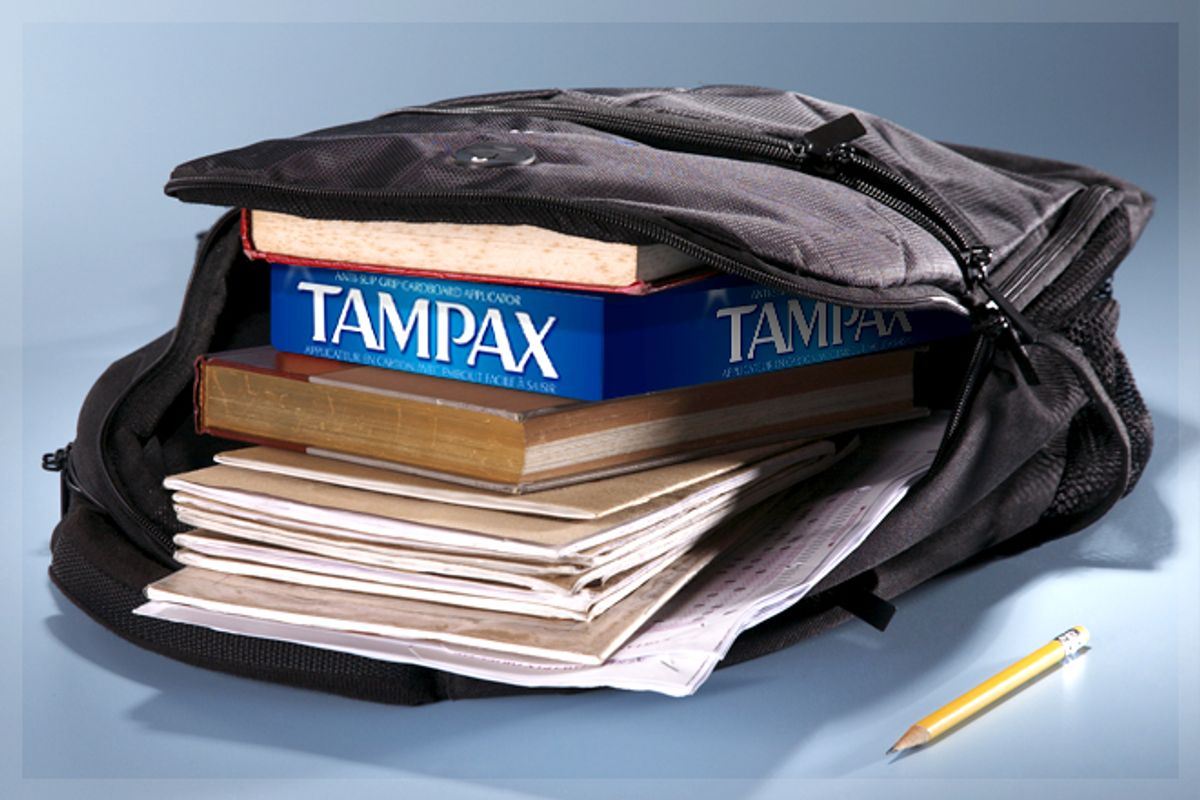 I didn’t mean to put the tampons into my 7-year-old son’s backpack. And I didn’t mean to put his Fruit Roll-Up and Juicy Juice into mine. But the switcheroo happened, on yet another crazed morning as I tried to hustle out the door to make the 7:40 train to New York City and drop Alex off at early bird summer camp. And while it was a very small thing, it had big implications for me.

Of course every parent has days when things don’t go as planned. But it seemed like my days were adding up. Alex’s dad and I divorced when he was 2 months old, and I’d been a single parent ever since, but I was now working a demanding job and commuting three hours every day (when the planets aligned), and these curious happenstances were turning our lives into a reality show – one that felt in danger of being canceled. I couldn't help wondering: Did we need to move? Did I need to change jobs?

Part of the anxiety, too, was that Alex was growing older, and it would be harder to keep him from seeing the cracks in my parenting. When your son is a toddler or a preschooler, you can get away with anything — you can make up any old story to cover up your mistakes, and he’ll believe it. But now that he was a smart, school-age kid, I was on the hook. I was living in a place with no family nearby to pinch hit and an active, curious little boy who wanted to eat up every opportunity life presented him — piano lessons, travel baseball teams, accelerated classes the school told me he needed. He was a lucky kid, and I was lucky to be in this situation, but it took frantic juggling and hard work. And at what cost?

On that fateful day, after stopping for an iced coffee, I settled into my midtown office. I was a magazine editor, and we were closing an issue that week, which meant a huge potential for chaos. I dug into my backpack to retrieve the baggie that held the tampon. Only this baggie had Alex’s camp snack in it.

I turned the backpack upside down, frantically searching for the tampon. My belongings spilled out all over the carpeted floor. No tampon. I hadn’t. Yes. I had. I had thrown my little baggie of tampons into my son’s Star Wars backpack instead of his snack baggie, which now sat on my desk, as a cruel reminder.

My first thought: Oh no, poor Alex is going to be hungry without a mid-morning snack.

So what now? Will the camp call? Or maybe Child Protective Services? Should I play defense and call the camp first? What will Alex think when his counselor announces, “OK, snack time,” and he innocently unzips his backpack, thirsty, dying of thirst (it was one of the hottest days of the summer), famished (oh my God, it was sports contest day and he would surely have won every race) and Alex pulls out three tampons. Would he ask the counselor, what is this? Would he try to unwrap it to see if it’s a new kind of Fruit Roll-Up?

I had stacks of articles to edit and proofread but all I could think of was Alex and his wildly inappropriate snack choice. I called a couple of friends for advice and, while their uncontrollable laughter did help diffuse the situation somewhat, none had any concrete advice.

“Good luck with that one,” one friend said with a laugh. She was right, but maybe I needed more than luck. Something had to give. I got up from my office chair, took the elevator down 15 floors to the lobby and escaped out the doors to Fifth Avenue and the nearest Starbucks, where I bought an iced mocha and walked slowly to my favorite little park on 53rd off Fifth where I sat next to the piece of Berlin Wall (yes, really, there is a piece of the Wall there). As I sipped, I thought long and hard. Could I do this? Was it going to be all right? Five minutes later, I had made the decision of a lifetime.

You are a single mom who needs your job. And you are not in a position to move. So you will raise a son who will be equipped with a great sense of humor that will undoubtedly help him through this crazy, nutty, ever-changing world. The tampon switcheroo was not a catastrophe. It was life.

The commute home dragged, and I couldn’t wait to see Alex. I knew I would have to go into damage control mode, but I was getting better and better at that. I felt prepared.

At 7:30, I walked in the house where he sat with the baby sitter who had picked him up from camp. “Hey, buddy, how was your day?”

“Great, I got to have Oreos for snack instead of boring fruit stuff that you always give me.”

Laurie Bain Wilson writes about travel, food and parenting and is the author of several travel guidebooks including “New York City Made Easy,” “New York City with Kids” and “Boston with Kids and Teens.” Follow her on Twitter @laurieheather.