Six of the right's biggest zealots

The GOP has taken a hard right turn, and here are some of the politicians shaping its domestic policy 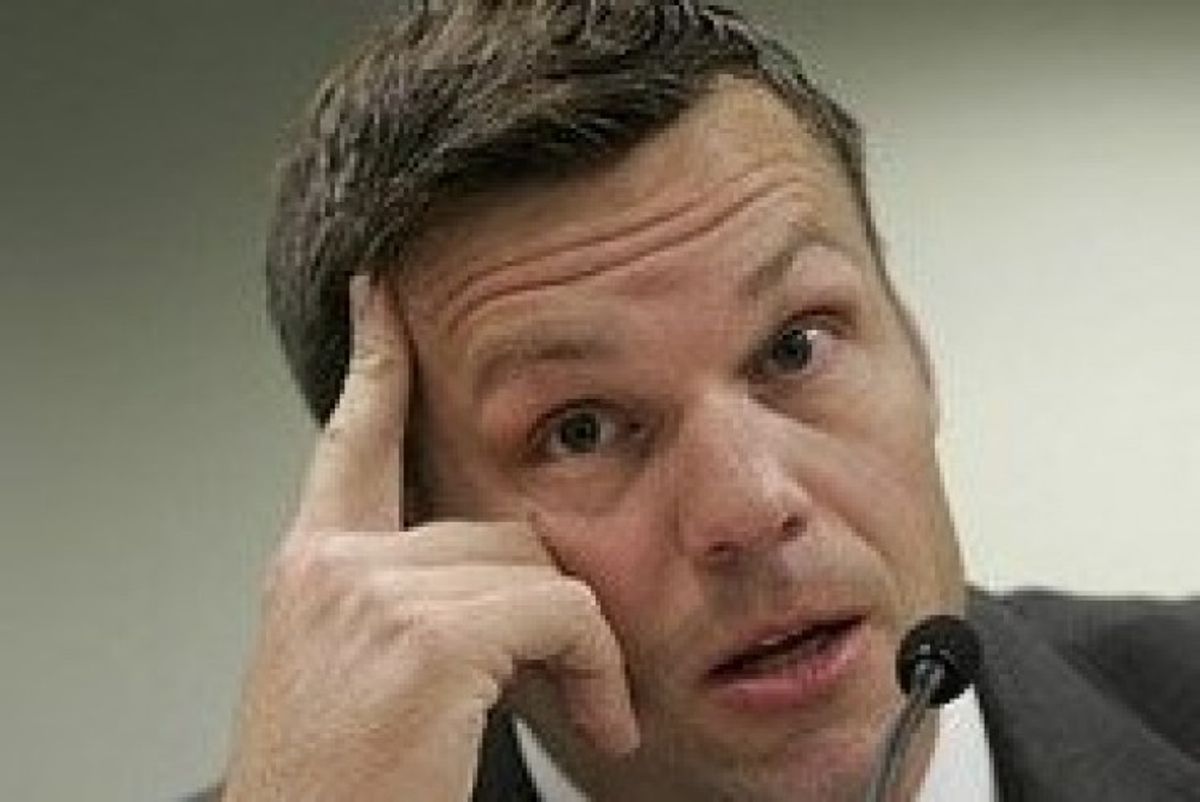 The official 2012 Republican Party platform is a far-right fever dream, a compilation of pouting, posturing and policies to meet just about every demand from the overlapping Religious Right, Tea Party, corporate, and neoconservative wings of the GOP. If moderates have any influence in today’s Republican Party, you wouldn’t know it by reading the platform. Efforts by a few delegates to insert language favoring civil unions, comprehensive sex education and voting rights for the District of Columbia, for example, were all shot down. Making the rounds of right-wing pre-convention events on Sunday, Rep. Michele Bachmann gushed about the platform’s right-wing tilt, telling fired-up Tea Partiers that “the Tea Party has been all over that platform.”

Given the Republican Party’s hard lurch to the right, which intensified after the election of Barack Obama, the “most conservative ever” platform is not terribly surprising. But it didn’t just happen on its own. Here are some of the people we can thank on the domestic policy front.

1. Bob McDonnell. As platform committee chair, McDonnell made it clear he was not in the mood for any amendments to the draft language calling for a “Human Life Amendment” to the U.S. Constitution and legal recognition that the “unborn” are covered by the 14th Amendment (“personhood” by another name). McDonnell is in many ways the ideal right-wing governor: he ran as a fiscal conservative and governs like the Religious Right activist he has been since he laid out his own political platform in the guise of a master’s thesis at Pat Robertson’s Regent University.

His thesis argued that feminists and working women were detrimental to the family, and that public policy should favor married couples over “cohabitators, homosexuals, or fornicators.” When running for governor of Virginia, McDonnell disavowed his thesis, but as a state legislator he pushed hard to turn those positions into policy. As the Washington Post noted, “During his 14 years in the General Assembly, McDonnell pursued at least 10 of the policy goals he laid out in that research paper, including abortion restrictions, covenant marriage, school vouchers and tax policies to favor his view of the traditional family. In 2001, he voted against a resolution in support of ending wage discrimination between men and women.” As governor, McDonnell signed the kind of mandatory ultrasound law that is praised in this year’s platform. When his name was floated as a potential V.P. pick, Cecile Richards of Planned Parenthood decried his “deeply troubling record on women’s health.”

2. Tony Perkins. Perkins heads the Family Research Council, whose Values Voter Summit is the Religious Right’s most important annual conference, where activists rub shoulders with Republican officials and candidates. Perkins bragged in an email to his supporters how much influence he and his friend David Barton (see below) had on the platform. Perkins was an active member of the platform committee, proposing language to oppose school-based health clinics that provide referrals for contraception or abortion, and arguing for the strongest possible anti-marriage equality language. Perkins also introduced an amendment to the platform calling on the District of Columbia government to loosen its gun laws, which Perkins says still do not comply with recent Supreme Court rulings.

The media tends to treat Perkins, a telegenic former state legislator, as a reasonable voice of the Religious Right, but his record and his group’s positions prove otherwise. Perkins has been aggressively exploiting the recent shooting at FRC headquarters to divert attention from the group’s extremism by claiming that the Southern Poverty Law Center was irresponsible in calling FRC a hate group. Unfortunately for Perkins, the group’s record of promoting hatred toward LGBT people is well-documented. Perkins has even complained that the press and President Obama were being too hard on Uganda’s infamous “kill the gays” bill, which he described as an attempt to “uphold moral conduct.” It’s worth remembering that Perkins ran a 1996 campaign for Louisiana Senate candidate Woody Jenkins that paid $82,600 to David Duke for the Klan leader’s mailing list; the campaign was fined by the FEC for trying to cover it up.

3. David Barton. Texas Republican activist and disgraced Christian-nation “historian” Barton has had a tough year, but Tampa has been good to him. He was perhaps the most vocal member of the platform committee, and was a featured speaker at Sunday’s pre-convention “prayer rally.” During the platform committee’s final deliberations, Barton couldn’t seem to hear his own voice often enough. He was the know-it-all nitpicker, piping up with various language changes, such as deleting a reference to the family as the “school of democracy” because families are not democracies. He thought it was too passive to call Obamacare an “erosion of” the Constitution and thought it should be changed to an “attack on” the founding document. He called for stronger anti-public education language and asserted that large school districts employ one administrator for every teacher. He backed anti-abortion language, tossing out the claim that 127 medical studies over five decades say that abortion hurts women.

Progressives have been documenting Barton’s lies for years, but more recently conservative evangelical scholars have also been hammering his claims about American history. The critical chorus got so loud that Christian publishing powerhouse Thomas Nelson pulled Barton’s most recent book – which, ironically, purports to correct “lies” about Thomas Jefferson – from the shelves. Of course, Barton has had plenty of practice at this sort of thing, from producing bogus documentaries designed to turn African Americans against the Democratic Party to pushing his religious and political ideology into Texas textbooks. Barton’s right-wing friends like Glenn Beck have rallied around him. And nothing seems to tarnish Barton with the GOP allies for whom he has proven politically useful over the years.

4. Kris Kobach. Kris Kobach wants to be your president one day; until now, he has gotten as far as Kansas Secretary of State. He may be best known as the brains behind Arizona’s “show me your papers” law, and he successfully pushed for anti-immigrant language in the platform, including a call for the federal government to deny funds to universities that allow illegal immigrants to pay in-state tuition – a plank that puts Kobach and the platform at odds with Kansas law. Immigration is not Kobach’s only issue. He is an energizing force behind the Republican Party’s massive push for voter suppression laws around the country, and he led the effort to get language inserted into the platform calling on states to pass laws requiring proof of citizenship for voter registration.

He also pushed language aimed at the supposed threat to the Constitution and laws of the US from “Sharia law”; getting this language into the platform puts the GOP in the position of endorsing a ludicrous far-right conspiracy theory. Kobach hopes that will give activists a tool for pressuring more states to pass their own anti-Sharia laws. In the platform committee, he backed Perkins’ efforts to maintain the strongest language against marriage equality. Even an amendment to the marriage section saying that everyone should be treated “equally under the law” as long as they are not hurting anyone else, was shot down by Kobach. Kobach also claims he won support for a provision to oppose any effort to limit how many bullets can go into a gun’s magazine.

5. James Bopp. James Bopp is a Republican lawyer and delegate from Indiana whose client list is a who’s-who of right-wing organizations, including National Right to Life and the National Organization for Marriage, which he has represented in its efforts to keep political donors secret. As legal advisor to Citizens United, Bopp has led legal attacks on campaign finance laws and played a huge role in the issue of unlimited right-wing cash flooding our elections. Bopp chaired this year’s platform subcommittee on “restoring constitutional government,” which helps explain its strong anti-campaign finance reform language.

Bopp is also an annoyingly petty partisan, having introduced a resolution in the Republican National Committee in 2009 urging the Democratic Party to change its name to the “Democrat Socialist Party.” In this year’s platform committee, Bopp successfully pushed for the removal of language suggesting that residents of the District of Columbia might deserve some representation in Congress short of statehood. His sneering comments, and his gloating fist-pump when the committee approved his resolution, have not won him any friends among DC residents – not that he cares. He also spoke out against a young delegate’s proposal that the party recognize civil unions, which Bopp denounced as “counterfeit marriage.” In spite of all these efforts, Bopp has been at the forefront of Romney campaign platform spin, arguing in the media that the platform language on abortion is not really a “no-exceptions” ban, in spite of its call for a Human Life Amendment and laws giving 14th Amendment protections to the “unborn.”

6. Dick Armey. Former Republican insider Dick Armey now runs FreedomWorks, corporate-funded, Murdoch-promoted Tea Party astroturfing group – or, in its words, a “grassroots service center.” Armey has been a major force behind this year’s victories of Tea Party Senate challengers like Ted Cruz in Texas and Richard Mourdock in Indiana, both of whom knocked off “establishment” candidates. FreedomWorks also backed Rand Paul in Kentucky and Mike Lee in Utah in 2010. As Adele Stan has reported, FreedomWorks’ goal is to build a cadre of far-right senators to create a “power center around Jim DeMint,” the Senate’s reigning Tea Party-Religious Right hero.

To put Armey’s stamp on the platform, FreedomWorks created a “Freedom Platform” project, which enlisted Tea Party leaders to come up with proposed platform planks and encouraged activists to vote for them online. Then FreedomWorks pushed the party to include these planks in the official platform:

Scrap the tax code; replace with a flat tax

Eliminate the Department of Education

An Ohio Tea Party Group, Ohio Liberty Coalition, celebrated that 10 of 12 made it to the draft – everything but the flat tax and eliminating the Department of Defense. But FreedomWorks gave itself a more generous score, arguing for an 11.5 out of 12. FreedomWorks vice president Dean Clancy said the platform’s call for a “flatter” tax “opens the door to a flat tax” and said they considered the education section of the platform a “partial victory” because it includes “a very strong endorsement of school choice, including vouchers.”

Honorable mention: Mitt Romney. This is his year, his party and his platform. The entire Republican primary was essentially an exercise in Romney moving to the right to try to overcome resistance to his nomination from activists who distrusted his ideological authenticity. The last thing the Romney campaign wanted was a fight with the base, like the one that happened in San Diego in 1996, when Ralph Reed and the Christian Coalition delighted in publicly humiliating nominee Robert Dole over his suggestion that the GOP might temper its anti-abortion stance. Romney signaled his intention to avoid a similar conflict when he named Virginia Gov. Bob McDonnell to chair the platform committee.

The new GOP platform reflects Romney’s desire to placate every aspect of the party’s base. It also demonstrates both the continuing power of the Religious Right within the GOP, as well as ongoing efforts to erase any distinctions between social conservatives and anti-government zealots, as demonstrated by Ralph Reed welcoming Grover Norquist to his Faith and Freedom coalition leadership luncheon on Sunday.