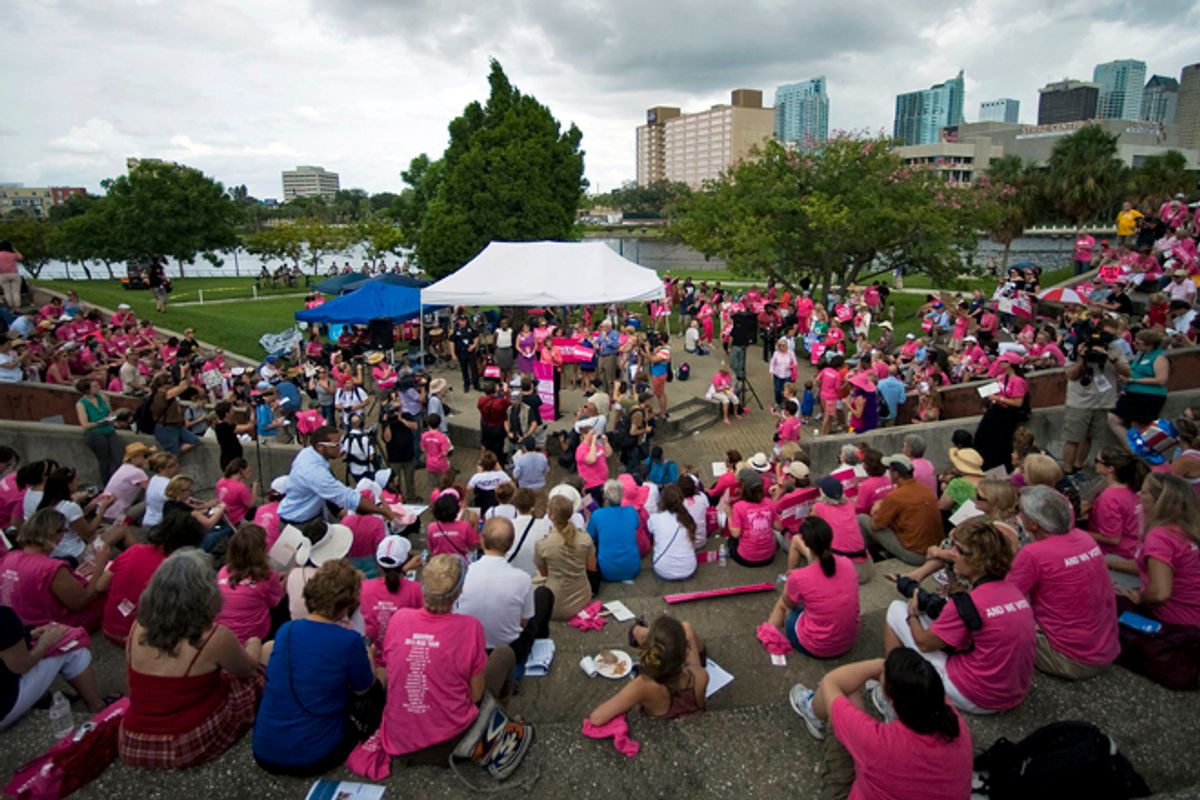 TAMPA -- Just as longtime Republican Randall Moody began to speak to a crowd of 400-plus at Wednesday's unlikely Planned Parenthood rally near the Republican National Convention, the dregs of Hurricane Isaac delivered one of our twice-a-day deluges. Moody and the rest of the crowd took cover for 10 minutes, and then he carried on with the rest of his speech as planned. He's faced far worse obstacles to getting his message across.

A Nebraska native, a veteran of seven Republican conventions and the co-chair of Republicans for Planned Parenthood, Moody was at the 1976 convention in Kansas City, when Phyllis Schlafly almost managed to reverse the party's support for the Equal Rights Amendment. (She succeeded later.) "But even in 1980, the Reagan people let us put in language to recognize there are diverse views [about choice] within the party."

Not anymore. By 1992, the official Republican platform opposed abortion even in the cases of rape, incest and severe risk to the life of the mother. And this year, Romney representatives stood by while Schlafly – she's still at it! --  and Family Research Council head Tony Perkins drove even uglier policies into the party's official stance. Moody and a handful of opponents tried to stop them but failed.

Ironically, the party's rightward lurch on choice, plus Todd Akin's idiocy, make Moody a little more optimistic. "What happens is the far right always over-reaches. Always. This time, they woke people up to the extreme platform language that's been there a long time – and that got worse this year."

Although nominee Mitt Romney claims he opposes exceptions to the abortion ban for rape, incest and the mother's health, "he made no attempt to influence the platform, there was no discussion at all," Moody said. "Then Reince Priebus came out and said, 'This is not Mitt Romney's platform, this is the Republican Party's platform.' Huh?" Romney apparently believes in leading from behind.

But Moody remembers when Romney was pro-choice, a political stance he used to publicly attribute to the death of a young relative, Ann Keenan, in a botched illegal abortion. I ask Moody how he thinks Romney could flip-flop on the issue, when he once had such a strong, personal, emotional reason to support choice. "It means you have no core," he replied. "And I think people see through that."

Moody told the young Tampa crowd, most of them Democrats, that he follows "in the footsteps of George H. W. Bush who rallied his Republican colleagues to pass a bill creating the federal family planning program. A bill that was ultimately signed into law by Richard Nixon. I follow in the footsteps of Barry Goldwater … who with his wife founded the Planned Parenthood affiliate in Arizona because he believed women’s healthcare is a personal decision." Today Newsbusters mockingly calls Moody "a fringe figure."

But he's confident the pendulum will ultimately swing back, thanks to a backlash by younger voters, with or without him. "This is probably my last rodeo," he said. Then he added, with a smile, "Well, I already retired once, and I came back."