At the Republican National Convention, the most unlikely of conservatives says she's leaning towards Romney 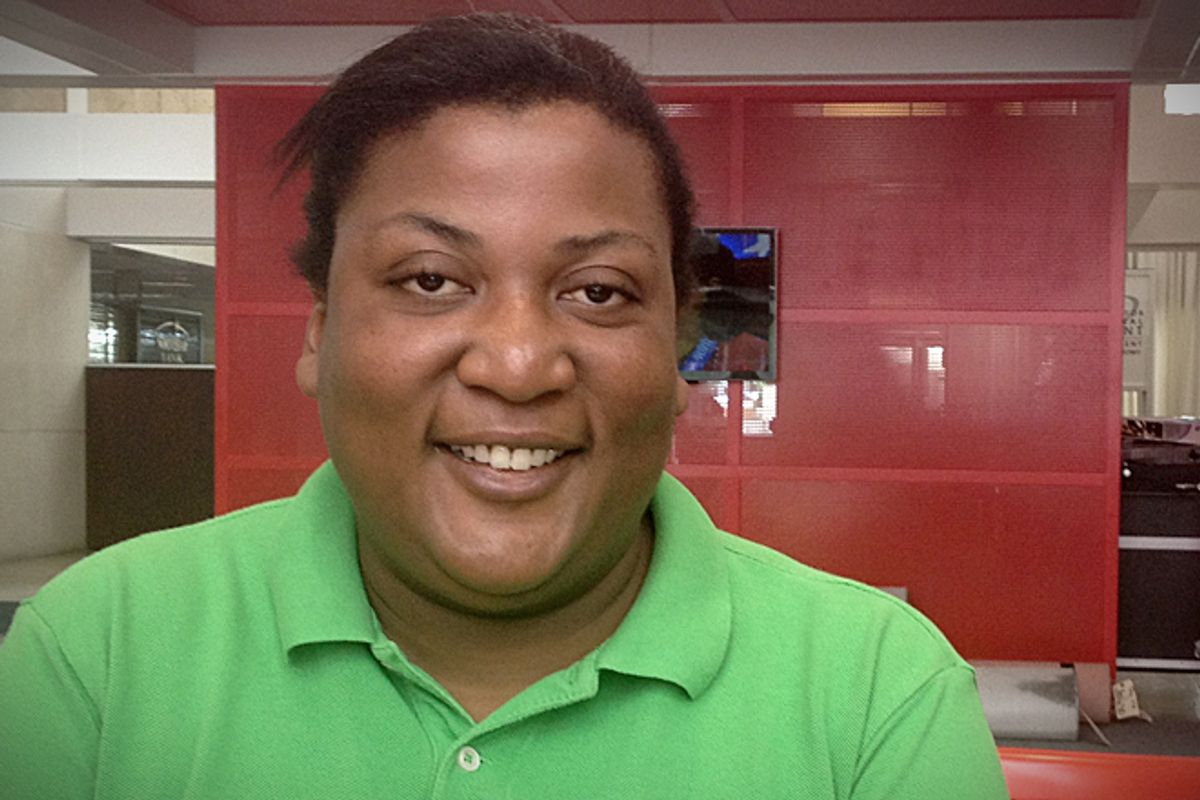 An hour into the Homocon party at the Republican National Convention, my quest for a Republican lesbian is feeling pretty quixotic. "I can put a dress on for you," offers Bryan Farris, the evening's event planner, when I ask for help.

But he isn't even a Republican anymore -- the party left him behind, he says, when it hardened on abortion and gay marriage.

"I cut and run. They're trying to change it from the inside," says Farris. We're standing just above a dance floor of mostly older, white gay men and hired dancers, male and female, wearing midriff shirts reading "Freedom Is Fabulous." (The organizers asked for restraint.) All of the women seem to be reporters, probably outnumbering the actual gay Republicans.

But then I find her, on the dance floor, a unicorn: A black lesbian conservative -- technically, a registered libertarian, but leaning toward voting for Mitt Romney.

"I voted for Barack Obama in 2008, and he sucks," says Jackie Hinton, 29. A woman of impressive height, she has just come off the dance floor with her friend Andrea, a tiny white woman who says she doesn't know what her own politics are. "He hasn't done anything. I feel like the Democratic Party is all about giving people shit and not personal responsibility."

Andrea knows what she thinks about this: "Go fuck yourself."

Jackie was pretty drunk -- it was nearly 2 a.m. at a club -- so I asked her to meet me for coffee the next day. It turns out she lives in the Tampa area and works on mortgages at Chase.

The party the night before was a triumph, she says, because she got to meet and be photographed with a few people she admires from conservative talk radio, Fox News and CNN: Grover Norquist, and conservative commentators S.E. Cupp, Will Cain and Margaret Hoover. She was hoping to meet Mary Matalin, but no luck.

She's a conservative, she says, because she believes in personal responsibility. Her parents are from Ohio, and she says they're Reagan Democrats who became religious conservatives, but who now accept her sexuality.

Being black, gay and female has never held her back, she says, beyond a few jerks hassling her and her friends. "I work at a big company, Chase. Each year they're on the top of HRC's score for diversity," she says. "It's never been a hindrance." She thinks working at big corporations scared of being sued has helped.

Hinton doesn't mind loosely allying with a party that includes factions that think she's a deviant or who would vote for her to not be able to marry, adopt or have protection against discrimination."Here in Florida, the Bible Belt, it's what they grew up with in church. I know that's what's taught. It's what I was taught," she says. "I don't think they do it as a discriminatory thing."

Anyway, Hinton thinks a generational shift on gay rights will mostly take care of that anyway. "I think it's a matter of time," she says. "As the younger generation gets older, starts voting, elects people that are more open-minded."

She opposes Obamacare, calling it "another business hindrance." And she thinks rather than forcing insurance companies to fully cover birth control, people should either not have sex or use condoms, and supports rape and incest exceptions on abortion, but not "abortion as birth control ... You have to take responsibility, grow up sometime."

"Republicans being demonized as anti-women is categorically false," she says. "There's the Todd Akin thing, he's a retard."

She might want to adopt some day, so lucky for her Florida is no longer enforcing its ban on gay adoptions.

Hinton is still considering throwing a protest vote to Gary Johnson, but she doesn't mind Mitt Romney. "I like the fact that he's a businessman. The fact that he's successful and wealthy, obviously he knew how to do his job."

And the Republican delegates that are here, who would never be caught dead at Homocon? "I'm never going to see those people. If they affect me in my life in Florida, I'll vote for people here who don't think that way," she said. "Those delegates from Alaska, they don't do anything to change my life here."