What Chris Christie didn’t tell you

His me-first audition for 2016 made it sound like the cure for DC gridlock exists in Trenton. It doesn't 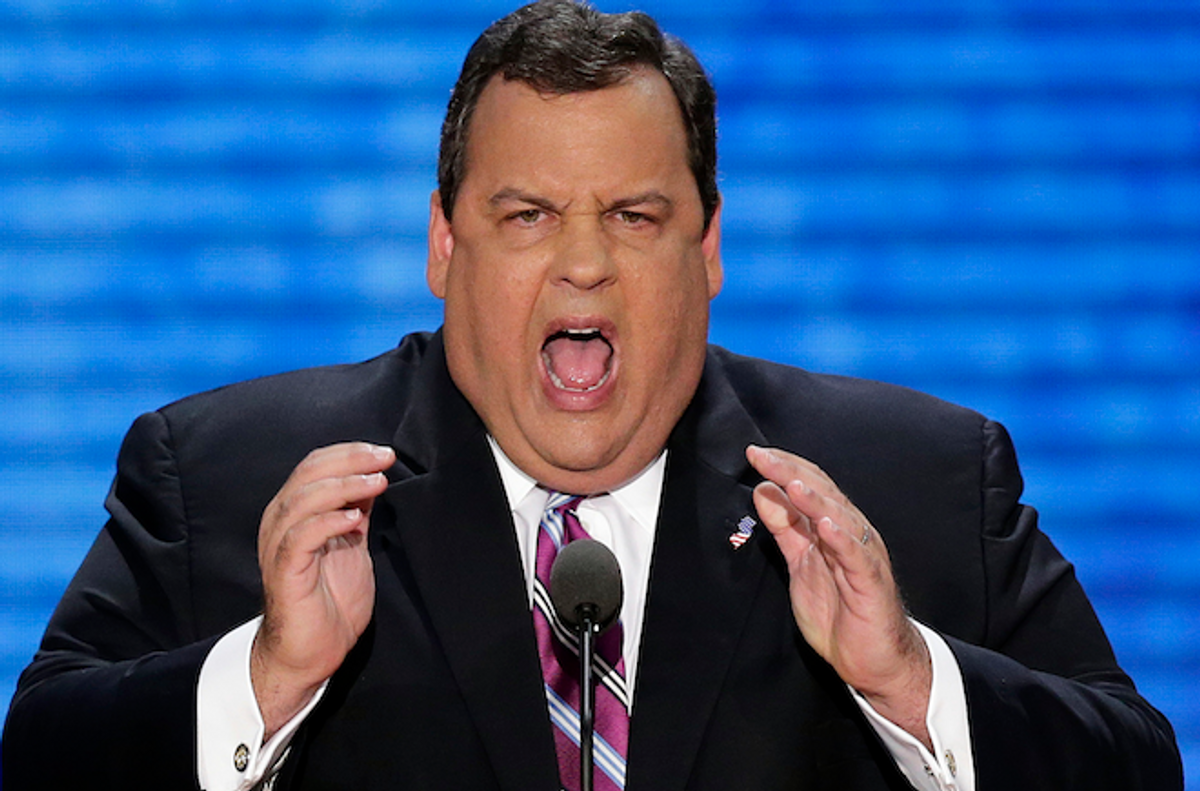 Chris Christie, who has previously spoken about the 2016 presidential race as if it’s a foregone conclusion that there will be no incumbent Republican running and that the GOP nomination will be wide open, delivered a keynote address Monday night that reeked of personal ambition.

The praise he directed toward Mitt Romney seemed perfunctory and almost incidental, with the heart of Christie’s speech devoted to extolling his own achievements in New Jersey. His intent was the same as that of any governor with presidential ambition: to portray his own executive leadership as a refreshing model of innovation, bipartisanship and results, one that the current occupant of the White House refuses, for some strange reason, to emulate.

"We need politicians to care more about doing something and less about being something,” Christie said. “Believe me, if we can do this in a blue state with a conservative Republican governor, Washington is out of excuses.”

It’s a compelling premise, obviously, but it’s also very misleading. It’s not that Christie hasn’t managed to achieve anything in New Jersey. He has, and his governorship has been unusually consequential. But almost nothing about how this has happened applies to the current situation in Washington.

Take pension reform, a major issue at the state level that Christie tackled last year, when he got the Democratic Legislature to approve a plan to raise public employee contribution levels and retirement ages and to suspend cost-of-living increases. This allowed Christie to say in his speech:

They said it was impossible to touch the third rail of politics. To take on the public sector unions and to reform a pension and health benefit system that was headed to bankruptcy.

With bipartisan leadership we saved taxpayers $132 billion over 30 years and saved retirees their pension.We did it.

What he didn’t get into was how the bipartisan coalition to pass that plan was assembled. The CliffsNotes version is this: Democratic support in the Legislature came from two specific blocs – one loyal to South Jersey’s conservative Democratic boss, a friend of Donald Trump with an antipathy toward public employee unions; the other tied to the top Democrat in Essex County (Newark and the surrounding area), whose initial election was aided by that South Jersey boss and whose mentor has a long relationship with Christie.

Here’s a good illustration of the dynamics that were at work: The speaker of the state Assembly also has a job as an Essex County administrator – meaning she essentially works for one of the Democrats who was pushing Christie’s plan. Not surprisingly, she made sure the bill came to a vote and played a key role in passing it. Oh, and did I mention that in his previous life as U.S. attorney for New Jersey that Christie – who built a statewide name for himself aggressively pursuing public corruption cases --  declined to pursue a case against that South Jersey boss when he seemed to have a golden opportunity to do so? And that speculation in Trenton endures that that boss quietly helped derail Democrat Jon Corzine’s reelection campaign in 2009, thereby boosting Christie’s chances?

Sure, Christie deserves credit for cultivating these relationships and alliances and knowing how to exploit them to further his agenda. But there’s no magic bullet here for ending D.C gridlock. As CJR’s Greg Marx explained last year:

As governor, Christie successfully shaped the agenda by forcing lawmakers to take a stance on public employee benefits. But his smartest strategic move was probably less adopting a post-partisan“reform” message than figuring out how to take advantage of the opportunities presented by the Democrats.

National politics, though, don’t work the same way. The key players in national parties are not individual bosses, but “intense policy demanders” who put pressure on elected officials not to stray too far off script—a distinction that has real implications for the likelihood of bipartisan deals, and in how committed a party’s elected officials will be to a set of policy views.

They said it was impossible to speak the truth to the teachers union. They were just too powerful. Real teacher tenure reform that demands accountability and ends the guarantee of a job for life regardless of performance would never happen. For the first time in 100 years with bipartisan support, we did it.

And it’s true: The Democratic Legislature unanimously approved a teacher tenure reform package in June, and Christie signed it a few weeks ago. Except, for all of Christie’s fiery anti-union rhetoric, the bill was actually crafted with significant input from the state’s teachers union, which supported its passage. Again, Christie can claim some credit here for pushing the issue aggressively in the public square and making it a priority.

But what the bill’s passage really shows is what can happen when both parties and all of the relevant interest groups share the same basic goal. Christie was hardly the only politician to support tenure reform, nor was his party alone in championing it. Democrats had been making a similar case, while the teachers union, tired of serving as a punching bag, was eager to strike a good deal that would take the issue off the table. All of this is perfectly conducive to compromise, and we’ve seen this happen in Washington before – Democrats’ willingness to work with George W. Bush on No Child Left Behind comes to mind.

The story of the Obama presidency, though, is one of Republicans walking away from common ground with Obama. The most famous example was healthcare reform, with the president embracing an individual mandate model with deep Republican roots. But instead of recognizing the effort to include them and their ideas, Republicans decided to reject what had been their own policy prescription, opting instead to score political points through unanimous opposition. This reflects what Tom Mann and Norm Ornstein outlined in their recent book -- a conscious decision by the Obama-era GOP to devote its power and resources to obstructing the president's agenda, refusing compromise and generally behaving like a parliamentary party. If Democrats played that same game in New Jersey, Christie wouldn’t have had much to boast about in Tampa on Monday.

The point is that state capitols are very different from the U.S. Capitol. The partisan divide often isn’t as distinct and absolute, and a whole array of carrots and sticks that aren’t applicable at the federal level are available to executive and legislative leaders. This is particularly true for a governor of New Jersey, who is vested with more authority and appointment power than any other governor in America. Christie has been very good at understanding this power and using it – better than any of his recent predecessors, certainly. This means he’s been an effective governor, even if you don’t agree with the policies he’s pursued. It doesn’t, however, mean he’d be an effective president.