Condoleezza Rice, of all people, rehabilitates the GOP

The GOP turns to its only remotely credible foreign policy voice, despite her horrible record 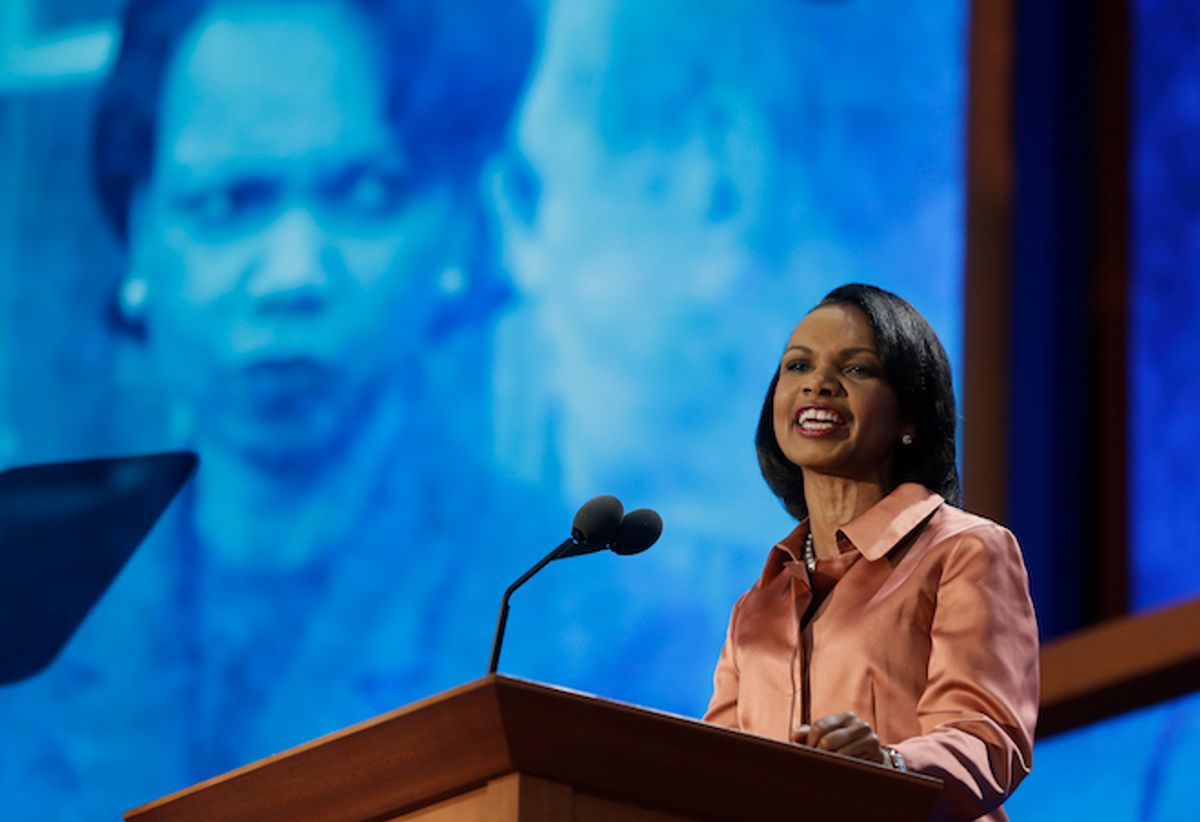 Condoleezza Rice is an odd choice to deliver a prime-time Republican convention speech, though she's demonstrated a perhaps surprising enthusiasm for campaigning for Romney this year. But she is a reminder not just of a Bush administration that this convention is studiously ignoring, but deeply connected to the Bush administration's most defining fuck-up: the lengthy, expensive and brutal Iraq War, and the dishonest propaganda campaign that led to it.

She's the only remotely credible foreign policy voice in attendance (sorry, Sen. McCain) but she has no successes at all to speak of. On domestic policy, she's decidedly more moderate than the room and has never demonstrated an interest in the economic issues (desperate fear of redistribution) that lately define the party.

While the speech was in progress, it felt unfocused. She was mad about some obscure things Obama has done in foreign policy -- China has all the free trades and we don't have any of the free trades! -- and she wouldn't sign on to the "We didn't build it" bullshit. Her very indirect attack on Obama was that his fecklessness leaves the world wondering "Where does America stand?" Her clearest endorsement of modern Republican economic policy was a general statement of distaste regarding anti-rich rhetoric.

Ours has never been a narrative of grievance and entitlement. We have not believed that I am doing poorly because you are doing well. We have not been envious of one another and jealous of each other’s success. Ours has been a belief in opportunity and a constant battle – long and hard — to extend the benefits of the American dream to all – without regard to circumstances of birth.

Rice is not a politician. It was impressive, I guess, that she worked from notes instead of a teleprompter, but her voice sounded on the verge of cracking, from nerves or something else, almost the entire time.

Rice got the biggest reaction of the night -- maybe the convention thus far -- with her sincerely inspiring story of growing up in segregated Alabama and ending up the secretary of state. (It was the biggest cheer I'd seen in the arena so far, and remained so for a few minutes, at which point Susana Martinez mentioned the time she had a gun.) The end is what convinced every pundit in attendance that Rice had just delivered the best speech of the convention, and she'll definitely run for office. (Everyone felt this way for a few minutes, until Susana Martinez, etc., etc.)

But: She didn't really say anything interesting before then, maybe besides an incredibly tepid endorsement of "compassionate" immigration laws. She was there to help rehabilitate the GOP brand, and the fact that the "we don't want the smoking gun to be a mushroom cloud" person is responsible for that is astounding.