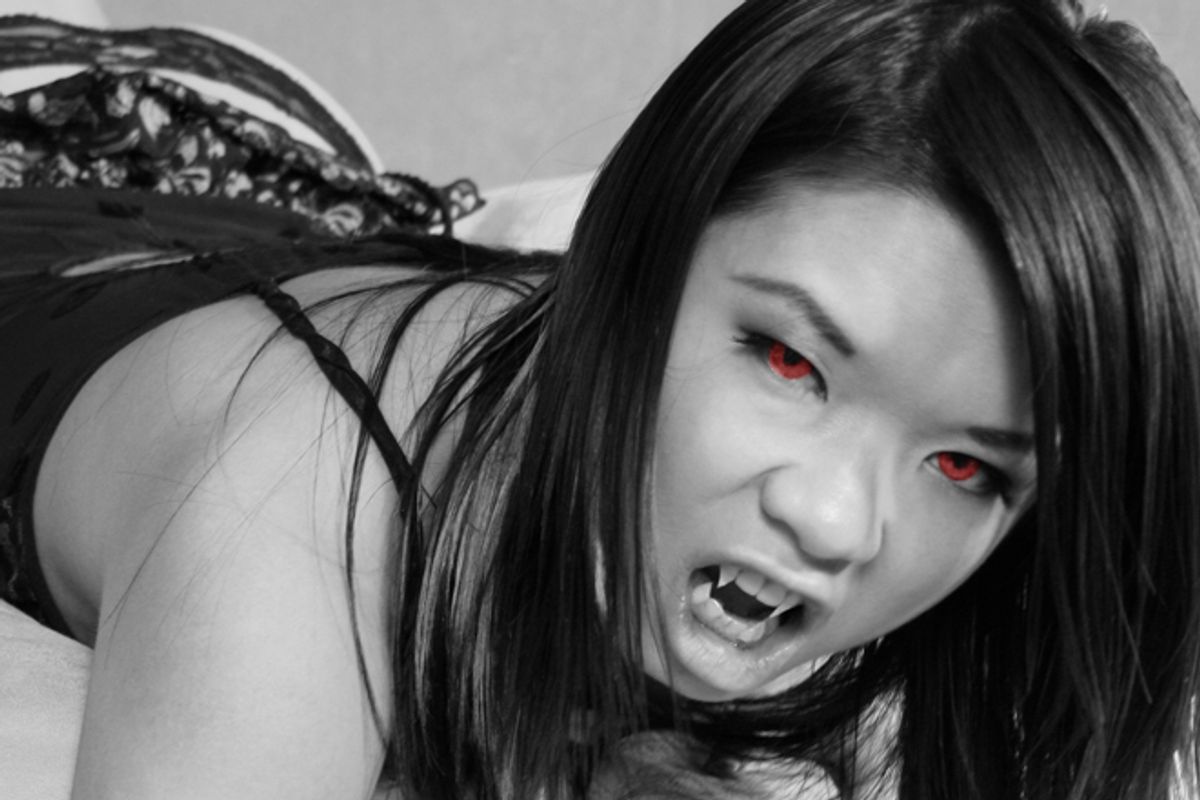 "She's supposed to be a tree nymph," he explains, pointing to a photo of a nude woman wearing green body paint and hugging a tree. Thirty-six-year-old Gared Hansen holds up a photo of a naked blond whose body is airbrushed so that it looks like her skin has fallen away to reveal her mechanical interior. "Obviously," he says, "she’s supposed to be a broken robot."

"Right," I say, crossing out "cyborg" in my notes.

There are shots of vampires, witches, mermaids and more -- all scantily clad or in the buff (see the slide show). We're sitting at the kitchen table in his home in Antioch, Calif., looking at Hansen's supernatural nude photography as his Rottweiler enthusiastically licks our feet. This hobby of his has twice gotten him suspended as a San Francisco police officer. Now he's suing the department, claiming it violated his free speech rights by punishing him for his extracurricular activities.

“I read a lot of science fiction and fantasy novels,” says Hansen, who looks part-nerd, part-hunk. “So my idea was to create a series of photos that had been digitally altered or in some way surrealistically created to look like various characters in the science fiction and fantasy novels that I enjoy.” Those include Edgar Rice Burroughs’ “A Princess of Mars,” and Roger Zelazny’s “The Chronicles of Amber,” books he eagerly takes down from his bookshelf to show me. “It’s just interesting to me and fun,” says Hansen. “I imagine it all when I’m reading the book, so it’s a way to put my imagination into reality.”

His dad hung out with the likes of Ansel Adams and taught him photography when he was a teenager, but Hansen has no delusions of grandeur. “I’m an amateur, so they’re not all great,” he says. Pointing to a shot that is black-and-white save for the woman’s bright red lips, he laughs: “It’s kind of a cheap amateur photography effect, but I love it. I think it’s great.”

Apparently the San Francisco Police Department disagreed. In 2009, a colleague found out about his racy hobby and notified higher-ups who launched an investigation. “The guy who did the investigation said it was wrong for a police officer to do this off duty, even though there wasn’t a correlation between my job and my hobby,” says Hansen. Ultimately, he was suspended on the grounds of unauthorized “secondary employment,” Hansen says, even though he provided tax records to show that it wasn’t a moneymaking venture. After that, he changed his photography website to make it clear that it was merely a hobby, not a business.

But then, as some media reports have put it, he was caught trespassing during a photo shoot at an abandoned hotel in 2010. That isn’t technically true, though, he says. “I made sure that I wouldn’t be violating any laws. Obviously, I’m very familiar with trespassing laws. It’s not just about being somewhere, it’s about what happens when you’re there -- if you’re asked to leave and don’t or you come back, or if you do some kind of damage or if you’re camping, or if there’s signage around a certain kind of property every so many feet.” None of that was the case, he says, and notes that local district attorneys threw out the citation “because it was obvious I wasn’t trespassing.” He was never fined and never went to court. Regardless, Hansen says he was told that if he wanted to keep his job, he had to stop doing his photography.

While Hansen took down his photography website to comply, his wife, who has posed for him herself and says she thinks his hobby is "really cool," created a new website to showcase his art -- but now that site is under investigation by the department, he says.

“My guess is there’s probably a group of people in the administration that have a strong bias against my work because of the nudity in it,” says Hansen. “It might be a religious-based bias or something else.” He finds it “interesting” that the department seems to encourage other police officers’ creative photography -- just so long as it doesn’t involve nudity. “Just a few months ago, we had a contest called ‘Behind the Badge,’ and it was off-duty creative photography from San Francisco firefighters and police officers. So the department backs it as long as they like the content.”

There is an irony in the fact that this is happening in San Francisco, of all places. “There’s people walking naked down Castro Street and the police department tells us, ‘Oh that’s fine, they can do that,’” he says with a laugh. “There’s the Folsom Street Fair and the Gay Pride parade where people are walking down the street naked or in costumes where they’re basically naked.” Nude robots are a different story, apparently.

His hope is that the disciplinary rulings will be overturned and that “some sort of policy will be put in place that allows me my artistic freedom while not on duty.” Ideally, he says, it will also provide case law that “allows other officers around the country that same kind of freedom" to airbrush as many naked canvases as they want.