He never got along with Romney, but delivers red meat anyway to evangelicals at the Republican National Convention 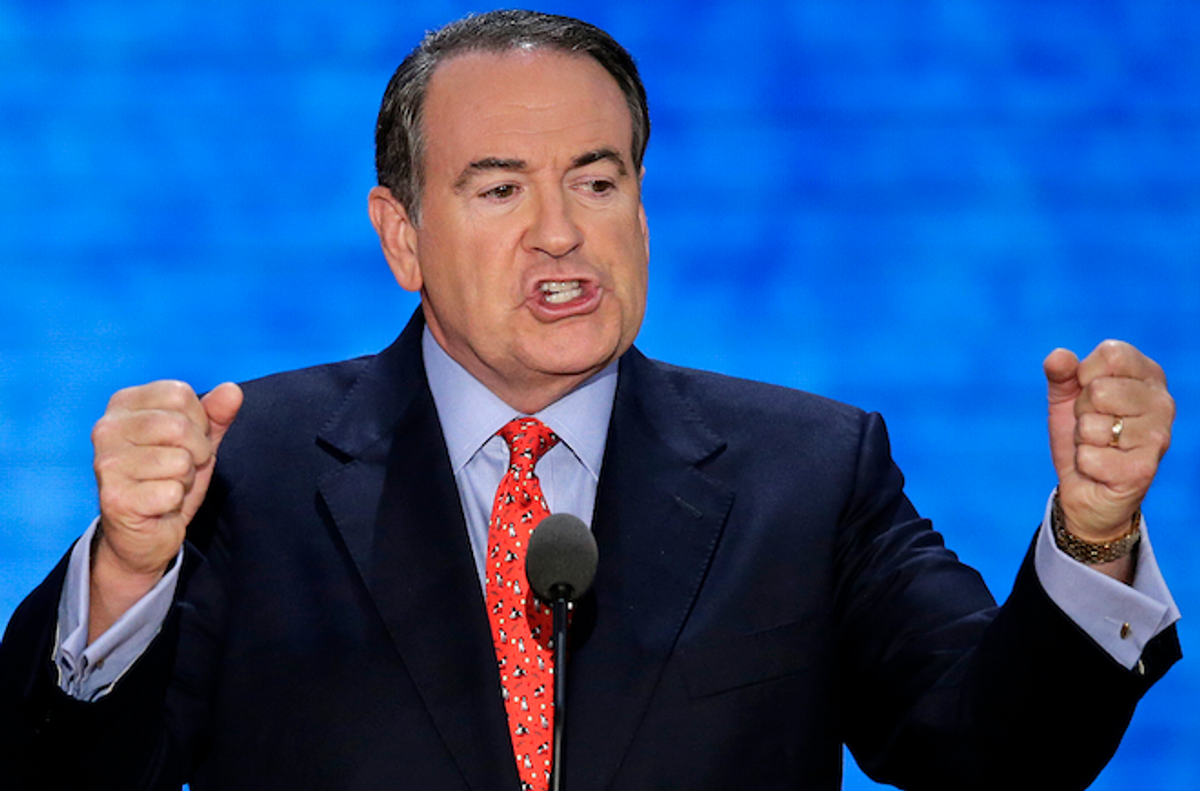 Tonight, Mike Huckabee's job was to skillfully bring up a set of topics that the Romney campaign has never wanted to linger on, a fight they keep losing to their own party: abortion, contraception, gay marriage. He did it only briefly, hidden among references to the "liberty-limiting, radical left-wing, anti-business, reckless-spending, tax-hiking party of Barack Obama" and barely convincing professions of allegiance to Mitt Romney. But it was unmistakable to anyone who knew what to listen for.

He was there to give the evangelical seal of approval, a couple of years after he engaged in some casual Mormon-baiting. "Of the four people on the two tickets, the only self-professed evangelical is Barack Obama," a bizarre statement, since so far as I can see Obama never called himself that, "and he supports changing the definition of marriage, believes that human life is disposable and expendable at any time in the womb or even beyond the womb, and tells people of faith that they must bow their knees to the god of government and violate their faith and conscience in order to comply with what he calls health care." (The "even beyond the womb" refers to the antiabortion obsession with accusing Obama of voting for infanticide as a state senator, a claim Politifact rated "pants on fire.")

This is a man who only last week defied the party brass and the public statements of Romney to stand by Todd "legitimate rape" Akin, who said of that candidate's decision to stay in the race, "We'll see whose God answers the prayers and brings fire from heaven," and who is the most high-profile supporter of the "personhood" movement, which seeks to ban abortion in all cases as well as emergency contraception and the IUD.

And tonight, this was a man who thought that in a week where the GOP is attempting to be on its best behavior in front of the ladies, it was a good idea to mock Debbie Wasserman Schultz, a woman whose name the average swing voter has probably never heard, for her supposedly shrill voice.

Huckabee also represents the deepening conservative evangelical and conservative Catholic alliance over reproductive health, and he made the first reference on the floor to the battle over Obamacare covering birth control as preventive care, or as they would put it, religious liberty. "The attack on my Catholic brothers and sisters is an attack on me," he said, in a variation of his previous "We are all Catholics now."

"The Democrats have brought back the old dance the 'Limbo' to see how low they can go in attempting to limit our ability to practice our faith," he said. "This isn’t a battle about contraceptives and Catholics, but of conscience and the Creator."

He sounded like he was holding his nose, but he certainly has gotten ideological purity, at least in name, from Romney-Ryan in return. Whether he can deliver those enthusiastic base votes and alleged swing Catholics remains to be determined.