After Ryan's dishonest performance, the objective press falters, and the right-wing machine begins its push-back 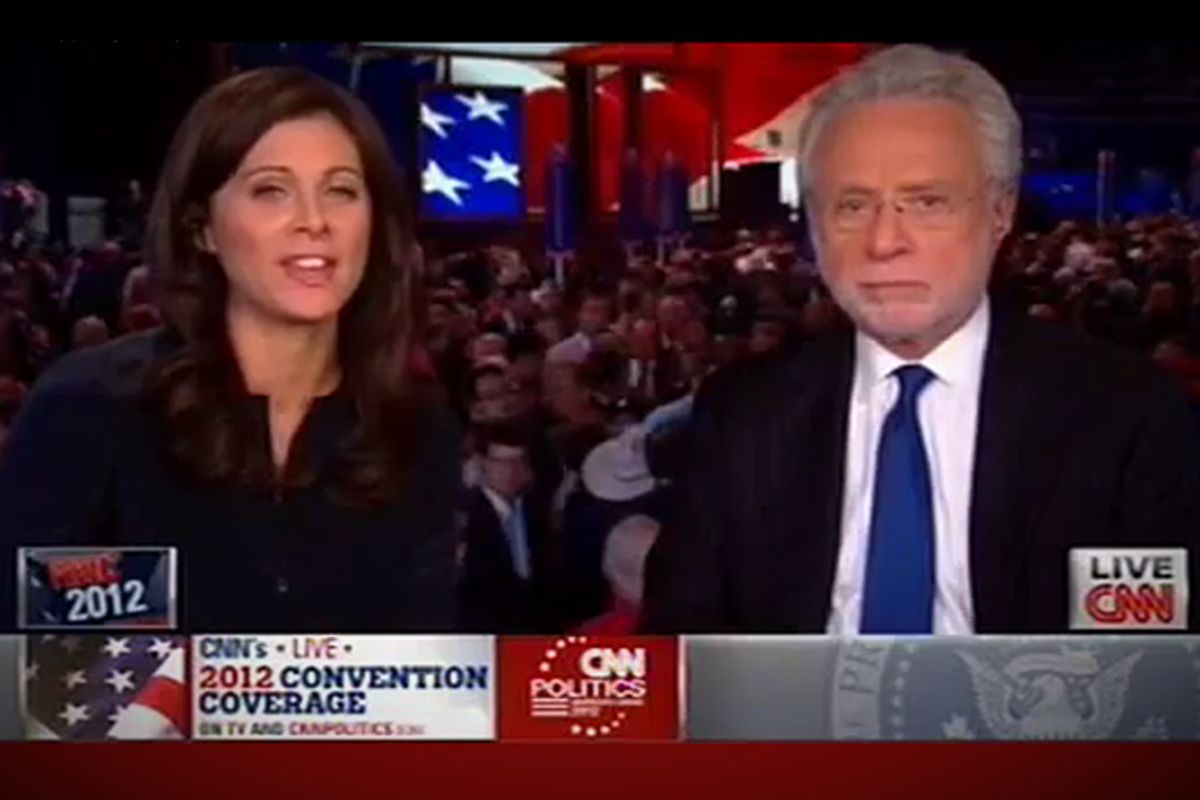 Paul Ryan's speech last night was so shamelessly dishonest that it seemed designed not just to stir up the crowd in the arena but also to give media fact-checkers aneurysms. There's really no other reason for Ryan to have made the closure of the GM plant such a prominent part of his address. That wasn't just a misleading interpretation of events, it was straight-up dishonesty.

It was an attempt to break the mainstream political press. CNN is constitutionally unable to say "that was a load of tendentious bullshit." Wolf Blitzer, who isn't paying attention to the speeches and wouldn't understand them even if he was, sort of figured out (probably because a producer in his ear told him) that the speech had some whoppers but more important to him was that the man on the stage said things that the people in the crowd seemed to enjoy so it was a Good Speech. "His mom is up there," Wolf Blitzer said. He noticed that part. Paul Ryan has a mom.

Every actual non-idiot reporter present made note of how shameless the entire thing was, but only some feel comfortable saying so. Jim Rutenberg's New York Times write-up of the speech is the driest and straightest report possible. The AP, which is a bit more tenacious than it used to be, went with "factual shortcuts."

Ryan's GM plant story was the most blatant outright lie. The Simpson-Bowles bit -- where Ryan blamed Obama for not acting on the debt reduction plan Ryan himself torpedoed -- was more a lie of omission, but it was perhaps the one that led the Beltway press to finally note how much this asshole lies. In politics, you can lie about a lot of things with the implicit permission of the political press. You can go around the nation repeating racial dog-whistles about welfare and barely raise an eyebrow. But you do not lie about Simpson-Bowles. Simpson-Bowles is sacred to these people.

That's why the Washington Post editorial board found themselves sadly forced to sorta call Ryan a liar.

Mr. Ryan has been an intellectual leader of his party on fiscal issues, and Mr. Romney’s decision to add him to the Republican ticket represented an opportunity to focus the debate on this urgent matter, “before,” as Mr. Ryan said Wednesday, “the math and the momentum overwhelm us all.” Mr. Ryan skewered the president in his speech for creating and then walking away from a bipartisan debt commission that, he said, “came back with an urgent report.” We’ve expressed similar frustrations, but omitted from Mr. Ryan’s self-serving rendition was the uncomfortable fact that Mr. Ryan served on that very commission but was unwilling to follow the brave lead of the Republican senators on the panel who supported its “urgent” recommendations. Will the Romney-Ryan ticket endorse them now?

They wanted to love Ryan so, so much. You can just feel it. (Even Chuck Todd was outraged!)

The right-wing response to the Ryan-is-a-liar coverage has been basically glee that the liberal media is ganging up on their guy. Among the conservative writers and pundits tasked with coming up with plausible-sounding arguments in favor of indefensible statements and actions, there is a lot of straining. Forbes' Avik Roy ("Disclosure: I am an outside adviser to the Romney campaign on health care issues") says all the liberals (and Weigel) are wrong, and Ryan was totally honest. (On "Obama's fiscal record," anyway. Not on the GM plant thing.)

Roy's rebuttal relies mostly on the "well technically he worded this in a weaselly enough fashion that you could argue that he didn't explicitly lie" argument. Ryan repeatedly trashed Obama for making Medicare cuts that Ryan also supported -- but his actual point was that Obama is spending the money he stole from Medicare on undeserving other people. (" However, there is a huge difference between cutting Medicare by $716 billion to fund $1.9 trillion in new health spending, as Obamacare did, and cutting Medicare by $716 billion to shore up the solvency of the Medicare program itself, as the Ryan budget sought to do.")

Roy's defense is the Simpson-Bowles thing is entirely meaningless and can't even be parsed. Yes, Ryan voted against it (and didn't mention that fact) but after he voted against it he released his own deficit reduction plan, which won him 10,000 deficit points, so he wins.

Jim Geraghty heroically defends the GM plant story. His defense mainly relies on the fact that it's a very politically effective line:

And that’s the biggest problem for the Obama campaign with this entire debate and all of their arguments about precisely when the GM plant stopped making cars. Most voters will tune out the back-and-forth charges until the bottom line: “The plant in Janesville is still closed.”

That's all true! The voters tune out the "back-and-forth charges" (lies, rebuttals, lies about the rebuttals) and the end result is you can get away with saying anything. And that's why everyone in America hates democracy.