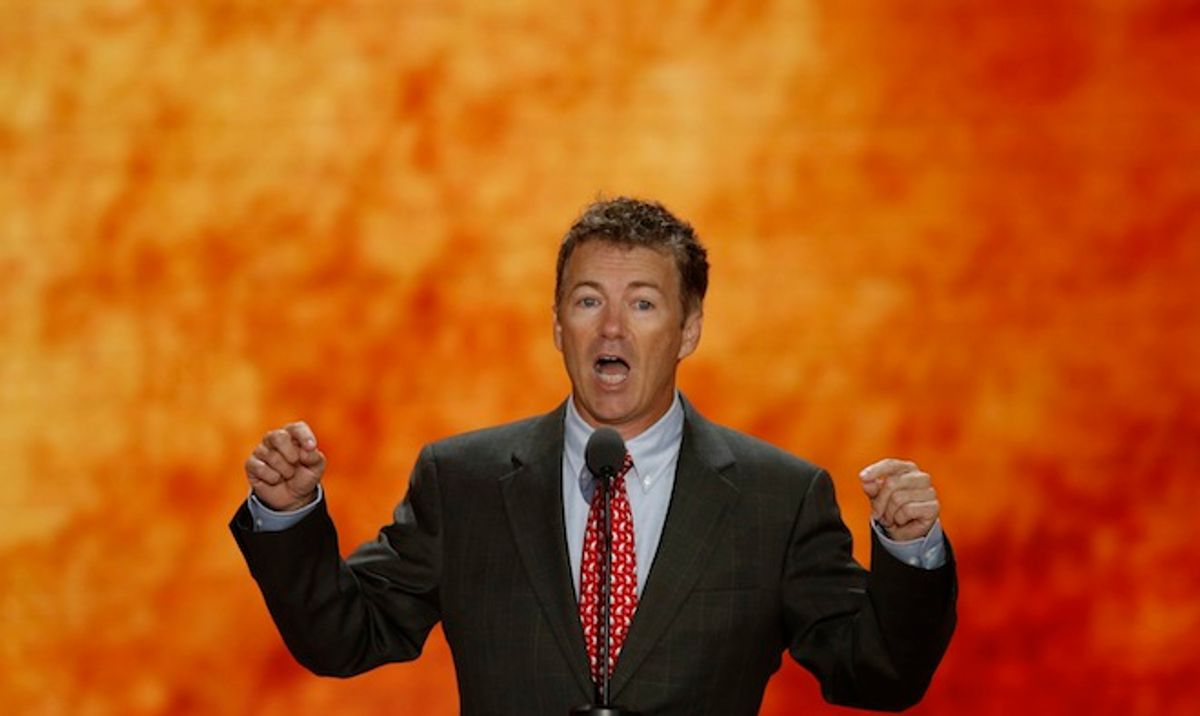 After an expensive-looking video tribute to the longtime Texas congressman Ron Paul -- a tribute that did not mention foreign policy or any number of other slightly unconventional Paul policy priorities -- Senate Minority Leader Mitch McConnell came out and saluted the actual Republican nominee for president, Mitt Romney, and told some truly awful jokes about Barack Obama golfing and so on.

Finally, well after the very brief tribute to his father, Rand Paul arrived, to deliver a speech based around last night's convention theme, "We Built That."

The nice thing about Paul's speech is that he did actually acknowledge the original context of "you didn't build that" -- he referred to roads, bridges and schools -- but he still happily and repeatedly misrepresented the meaning of the line, in keeping with everyone else so far at the RNC. "Roads don't build businesses," he said, which is not just not the point of the original comment but also doesn't even make sense as a thing for anyone to believe. Also, you know, it's hard to build a business without roads! (Also also: What about paving businesses?) "For most of our history, no politician would dare tell Americans 'you didn't build that," Paul said. (Though for much of our history many of the people who built lots of things weren't really allowed to be considered Americans.)

Rand started off by declaring that he still thinks Obamacare is unconstitutional -- there was applause for "the powers of the federal government are few and defined" -- and he otherwise stuck mostly to issues that don't make mainstream (right-wing) Republicans uncomfortable. Rand Paul shares his father's isolationist streak, but the only hint of that was a brief passage in which Paul said "Republicans must acknowledge that not every dollar spent on the military is necessary or well-spent," a sentiment he paired with a call for Democrats to support "reforming" "domestic welfare and entitlements."

He also, at one point, referred to something giving him "a lump between by chin and my bellybutton," which was weird.

I am not sure what purpose this speech served. It didn't mollify the hardcore Ron Paul supporters, who don't much respect Rand now that he's a Romney-endorsing sellout. Rand Paul isn't a compelling speaker or a guy with an appealing personality or inspiring personal story. He has a sort of whiny voice and he's the son of a longtime congressman widely considered to be a kook.

But he did his job and hammered the "didn't build it" bullshit line and endorsed Mitt and didn't say anything too crazy.

Then there was a video tribute to the Bush presidents, the only time they will be mentioned this week. And then came John McCain. Following Rand Paul -- who did, to his credit, tell Republicans to dial it back on the militarism -- with John McCain's tribute to endless war with everyone forever seemed like one last fuck-you from the party to the Pauls and their followers. Paul-supporting delegates and attendees once again responded by walking out of the arena.