His sister insists Mitt won't ban abortion, maybe because she remembers their relative who died of an illegal one 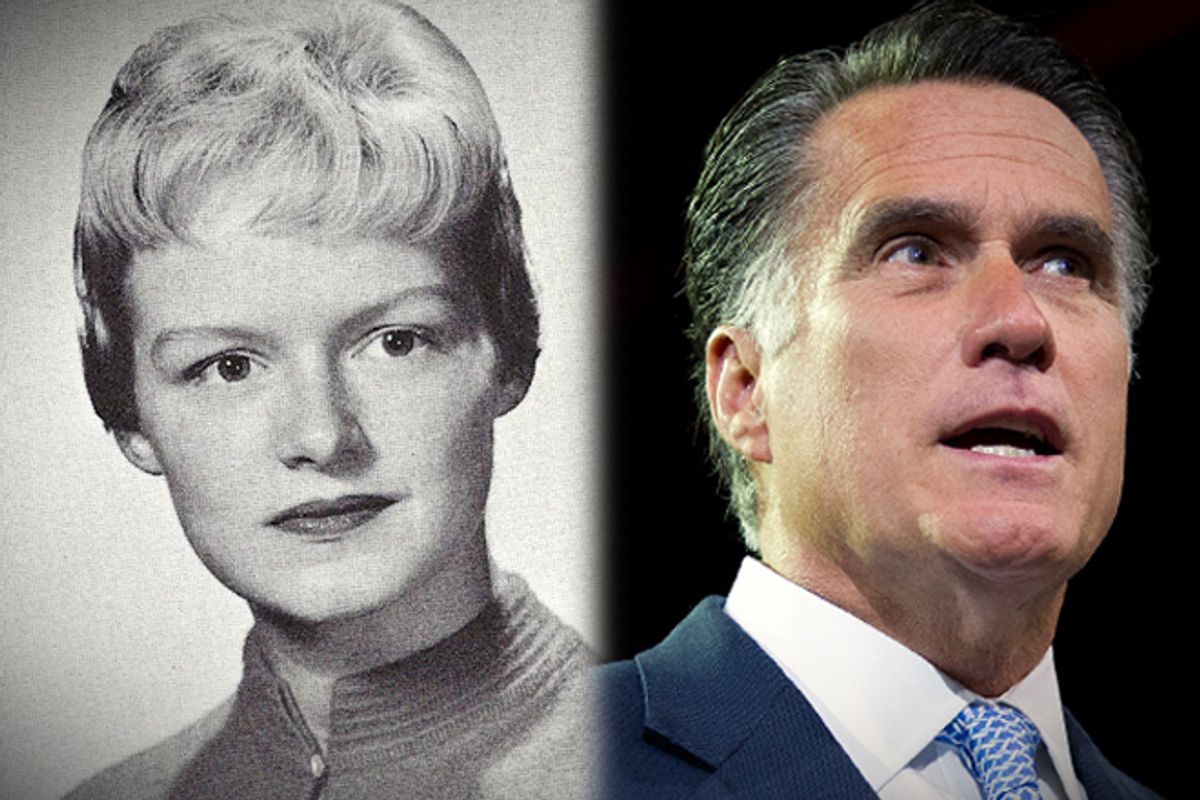 Jane Romney is the unusual Romney -- she's an actress who's mainly supported Democrats -- but she's in Tampa stumping loyally for her brother Mitt, the GOP's presidential nominee. She made news on Wednesday, and not in a good way, for telling reporters that a federal ban on abortion is “never going to happen” if her brother is elected president.

“He’s not going to be touching any of that," she told the National Journal. "It’s not his focus." And while Mitt Romney, once pro-choice, now declares he's against it, this week he sounded a little wishy-washy himself when he told CBS that abortion "is the decision that will be made by the Supreme Court. The Democrats try and make this a political issue every four years, but this is a matter in the courts. It’s been settled for some time in the courts."

Mike Huckabee apparently chickened out on declaring the new Culture War with his prime-time speech Wednesday night, where he spent more time insulting Debbie Wasserman Schultz than talking about abortion. After trashing Republican leaders of abandoning Todd Akin last week, he made nice in Tampa. I wonder what Huckabee got in exchange for his kindness. If I were an ardent antiabortion advocate, I'd be asking what the hell Jane and Mitt Romney are trying to tell America.

Does Jane Romney speak for her brother? Probably not. But her pro-choice rhetoric is just one more reminder of why Mitt Romney, and his mother, Lenore, once said they were pro-choice: Their young relative, Ann Keenan, died at 21 of an illegal abortion in 1963. Keenan's brother Loren was married to Mitt and Jane Romney’s sister Lynn.

As Justin Elliott detailed in Salon last year, in a debate with Sen. Ted Kennedy in 1994, after Kennedy accused him of being "multiple choice" when it came to the issue of choice, Romney shot back:

“On the idea of ‘multiple-choice,’ I have to respond. I have my own beliefs, and those beliefs are very dear to me. One of them is that I do not impose my beliefs on other people. Many, many years ago, I had a dear, close family relative that was very close to me who passed away from an illegal abortion. It is since that time that my mother and my family have been committed to the belief that we can believe as we want, but we will not force our beliefs on others on that matter. And you will not see me wavering on that." He later added that "I hadn’t thought much about" abortion until Keenan's death, but that it “obviously makes one see that regardless of one’s beliefs about choice, that you would hope it would be safe and legal.”

The Keenan family asked that donations in the young woman's name be sent to Planned Parenthood. Yes, Planned Parenthood, the organization Ann Romney donated to herself in 1994. The one Mitt Romney now says he'd "get rid of."

Romney's flip-flops are so common they're almost beyond noticing now. But that one scares me. I don't know how you have that kind of personal family experience with the tragedy of illegal abortion, declare yourself pro-choice, and then change your mind -- and never mention your dead young relative again. Maybe Jane Romney has never been able to make that particular flip herself. Maybe she doesn't believe her brother is that callous.

Mitt Romney is expected to try to humanize himself in his speech tonight, to talk about his family, his faith and his values. I can promise he won't talk about Ann Keenan. But he should be asked about her during this campaign.