Susana Martinez: What Palin could have been

New Mexico's Susana Martinez is what the GOP thought it had in 2008: An independent thinker who can work with Dems 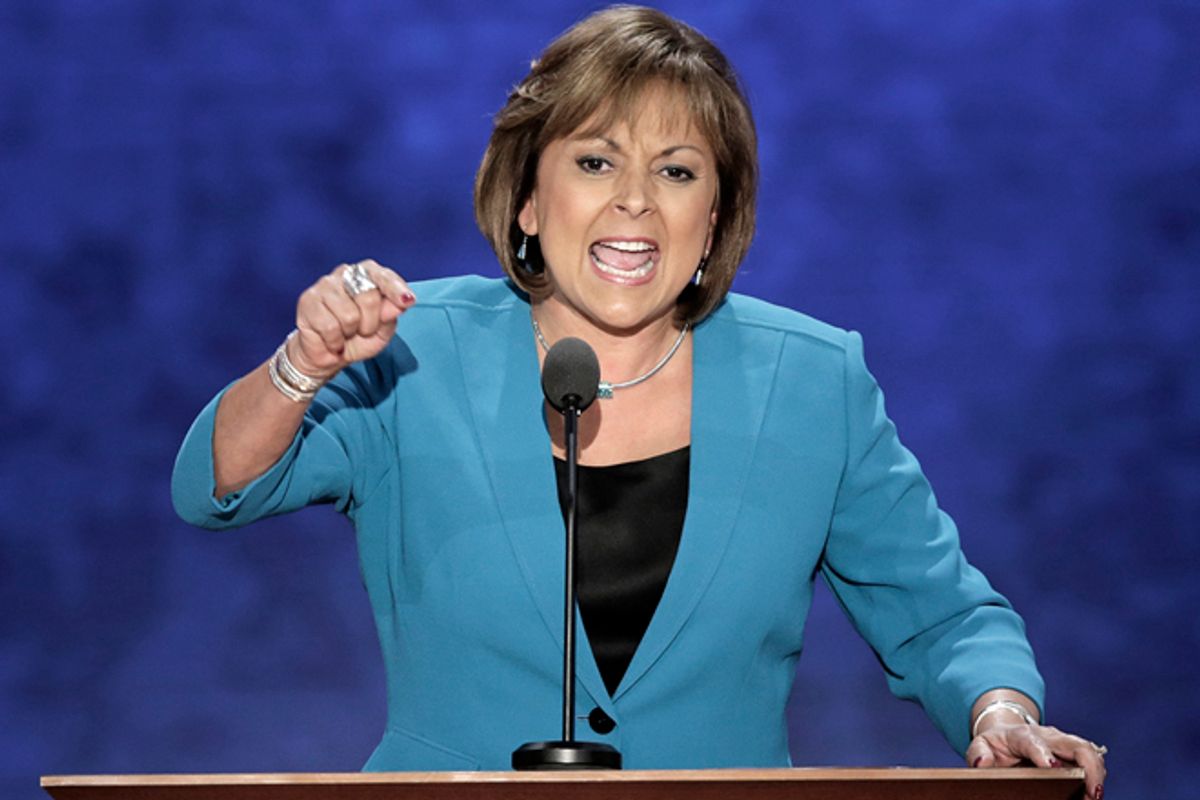 TAMPA -- Give Sen. Lindsey Graham credit for telling it like it is: “We’re not generating enough angry white guys to stay in business for the long term,” he told the Washington Post this week. Taking the stage last night at a prominent moment during the Republican National Convention, New Mexico's first Latina governor, Susana Martinez, didn't just represent a demographic milestone -- she's also occasionally a voice of dissent.

True, her biggest applause line involved a Smith and Wesson .357 Magnum, and the National Review has termed her a "'full service' Republican, a conservative across the board, including on the 'social issues.'" (The magazine also raved that she "expresses some quite hard-line views in a lovely feminine voice."

But as the caretaker of a disabled sister on Medicaid, she has been distinctly unenthusiastic about the budget proposed by Paul Ryan. She was also the only speaker on the convention floor to utter the words "immigration reform," and not mean building a wall.

Martinez was given pride of place at a convention nominating a man of whose main immigration policy "proposal" she remarked to Newsweek in May, “‘Self-deport?’ What the heck does that mean?" and added, "Republicans want to be tough and say, ‘Illegals, you’re gone.’ But the answer is a lot more complex than that … I have no doubt Hispanics have been alienated during this campaign. But now there’s an opportunity for Governor Romney to have a sincere conversation about what we can do and why.”

Anyone actually expecting that sincere conversation can expect to keep waiting. Former Republican Sen. Mel Martinez said earlier this week that Romney has "decided that he’s going to deal with this issue as a president and not as a candidate." He said his suggestion to the campaign when it comes to wooing Latino voters was, "Don’t talk about immigration, but somehow find a way to connect.”

So far, per Buzzfeed, this is what the strategy to "connect" looks like: A big Spanish-language ad spend, a big ground game allocation and sending out Ann Romney yesterday to try to address the fact that the vast majority of Latino voters support Obama. (Also, a Romney son speaks Spanish.)

She said women and Latinos "that would naturally be voting for another party wake up and say, 'You’d better really look at the issues this time.'” Good luck telling everyone that last time they were utterly duped. Indeed, that was Ann Romney's explicit point: “It really is a message that would resonate well if they could just get past some of their biases that have been there from the Democratic machines that have made us look like we don’t care about this community.” Surely it had nothing to do with a primary season in which Rick Perry's version of the Dream Act in Texas was an ideological deal breaker, or proposed cuts in Medicaid and other social insurance programs.

Contrast that with Martinez, who told Newsweek, “I believe in providing services to adults and children who can’t take care of themselves ... Sometimes Republicans engage in number-crunching analysis that doesn’t always take the neediest into account. We have to factor them in before we start proposing these cuts.”

A former prosecutor and highly popular governor who has to work with a Democratic Legislature, she seems to be what Republicans thought Sarah Palin would be. In fact, she got Palin's endorsement, but also amiably met with Barack Obama and told the Albuquerque Journal that she and the president "speak the same language" on education reform. (On the floor last night shortly before Martinez's speech, the state chair of New Mexico's Republican Party, Monty Newman, told me, "She has her own ideas about education policy … if they align with President Obama's, then they do, but the fact of the matter is her views are her own." While Newman praised Martinez, he also said,  "I'm not going to address her feelings on Paul Ryan's budget.")

The few Latino Republicans here at the RNC who weren't onstage (that includes both the governor of Puerto Rico and his wife), and who seem quietly dismayed at the party line on immigration, are in a tough position, particularly at a moment of message discipline and party unity. "I personally take a much more moderate view than many Republicans, quite frankly," Jon Barela, Martinez's secretary of economic development, told me on the floor. He added, "The thing about building walls -- I grew up on the border, first of all, very close to the border. Building a wall on the border is a very difficult thing ... People have never been on the border."

Martinez has. "In many ways Mitt Romney and I are very different," she said last night. "Different starts in life. Different paths to leadership. Different cultures." Of course, Mitt Romney was also once a Republican governor facing down a Democratic legislature. He even took on another seemingly intractable issue -- in his case, healthcare reform -- that the federal government had been stuck on, and that involved political risk-taking and bipartisanship. But we can't talk about that this week, either.