If Romney wins, he'll govern according to the whims of the radical right. He owes them and they own him 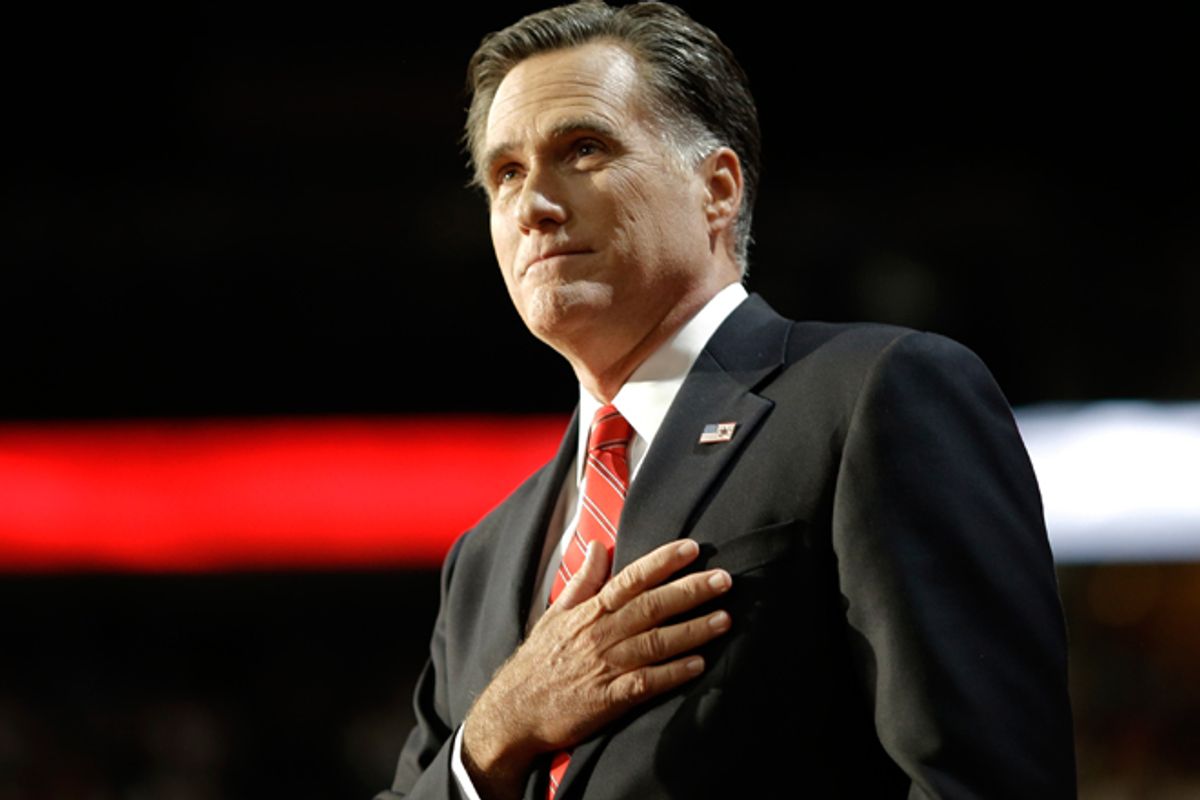 If you had not paid any attention to the presidential election until Mitt Romney’s convention speech, you might be left with the impression that he is a thoughtful and friendly guy who sure looks presidential and is a reasonable, moderate alternative to President Obama.  And my hunch is that, in fact, this might not be far from the truth.  In a vacuum, it is distinctly possible that Mitt Romney would prefer to run as a moderate Republican in a campaign focused on honest and substantive disagreements and not nasty attacks and lies.  But unfortunately for Mitt Romney and our country, he is running in a Republican Party hijacked and controlled by right-wing extremists. The Tea Party is the real Republican candidate for president of the United States.  Mitt Romney is just their puppet.

It wasn’t supposed to be this way for Republicans. The vast majority of the conservative rank and file desperately wanted a strong social conservative to win the nomination. But given President Obama’s strong favorability and the slow but steady economic recovery, the conservative clowns who threw their hats in the ring were weak candidates at best even before being shot to pieces by the circular firing squad of the campaign. Mitt Romney was no one’s first choice. He was just the last one standing.

In the primary and since, Romney has done everything imaginable to pander to the Republican right-wing base. He has flip-flopped on the full spectrum of issues from climate change to abortion to his own signature healthcare law and plenty more in between.  That’s not to say that Mitt Romney doesn’t authentically hold some very strong conservative views; it appears, for instance, that he has always been personally opposed to abortion.  But if there’s anything consistent about his public positions, it’s that they’ve been shaped more often by convenience than conviction.

Mitt Romney played liberal when running for office in a liberal state. Then he played conservative to woo Republican voters and win the nomination for president.  Romney’s choice of Paul Ryan as his running mate — a hero of the Tea Party as much for his fiscal extremism as his radical social views — and his failure to stand up against the most conservative Republican Party platform in history are just the most recent and very deliberate signals of his shift to the right.  Amid a clear decision to try to win the White House by pandering to and galvanizing the conservative base, Romney’s convention speech was a made-for-television aberration — an attempt to attract moderate voters by hoping they don’t pay attention to the not-ready-for-prime time radical Republican agenda.

With a few exceptions, Romney didn’t pepper his speech with the flagrant lies and smears against President Obama that have typified the Republican campaign.  In fact, Romney basically implied that he would have backed the president’s agenda — as European-influenced as Romney has alleged it to be — if it had worked.  But, oh darn, it didn’t.  So vote for me.  A pitch that might work with voters who have never heard about Romney’s plans to turn Medicare into a costly voucher system, Ryan’s legislation to narrow the legal definition of rape, or the campaign’s pledge to further cut taxes for millionaires and billionaires even if it increases the deficit — let alone Ryan and the Tea Party’s grand plan to basically get rid of all government except the military and national parks.

So what if the speech Romney gave last night might be closer to his inherent temperament than the nasty campaign he’s been running?   Who cares?  It doesn’t matter either way!  The fact is, Mitt Romney is now the candidate of the Republican right, whether they wanted each other or not.   The radical wing of the Republican Party is now providing every drop of money and muscle for Romney’s campaign.  He owes them and they own him.  And if Romney wins, he will govern according to the Tea Party’s whims.  Need proof?  Look at John Boehner’s transformation over the last four years in which he went from working with the president to forge bipartisan compromises (aka governing) to automatically opposing every proposal the president put forward including those dripping with conservative policies.  Those who refuse to bow to Tea Party extremism, Republicans like Olympia Snowe and Lindsey Graham, are simply leaving office.  The Tea Party has a stranglehold that is far too vast and tight.

In other words, Mitt Romney can try to dazzle voters here and there with performances of moderation.   But the fact is, if Romney wins the election, he won’t be flopping into some empty chair.  He’ll be sitting in the Tea Party’s lap.