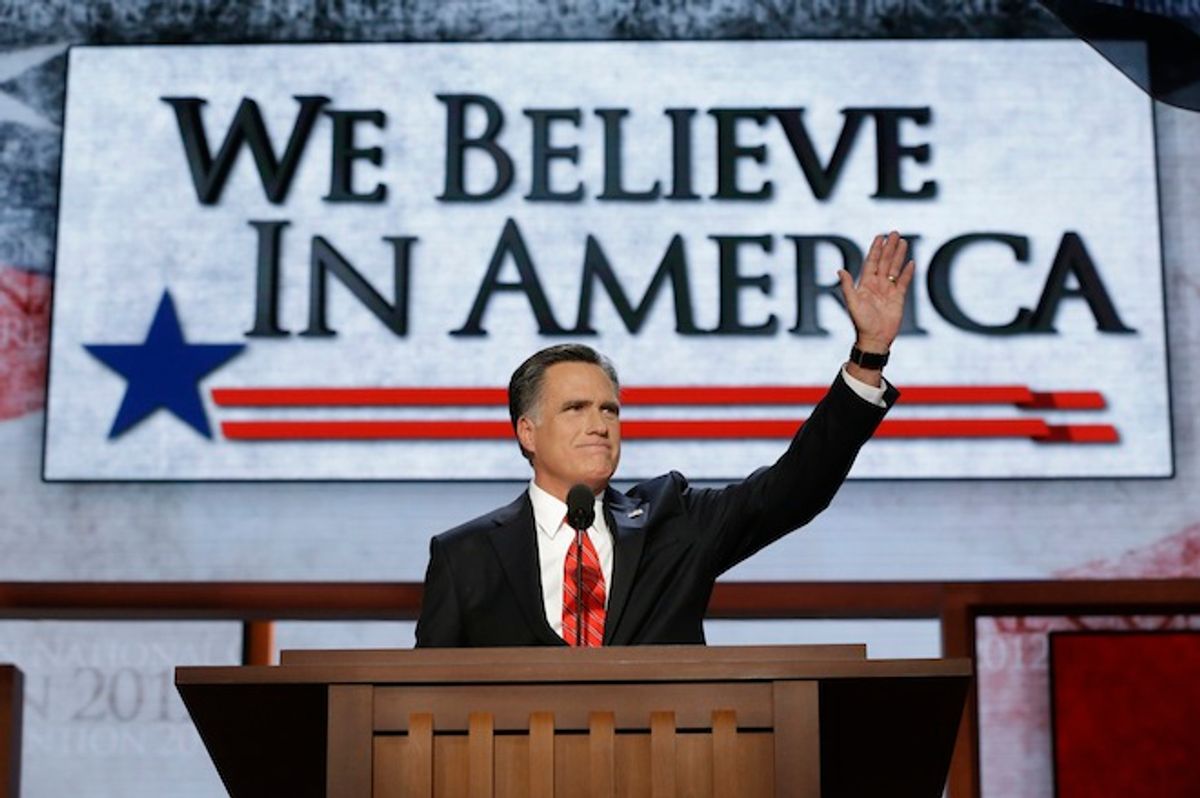 Talk about the soft bigotry of low expectations. The final night of the Republican National Convention showed that Mitt Romney has friends, did many kindnesses for members of his church, is a fun-loving father and a moneymaking businessman who is willing to hire black people.

(None of these facts were under dispute, by the way.)

With his favorability ratings "the lowest of any major-party nominee at roughly the time of his convention," according to ABC News, Romney and the party were tasked with reintroducing the nominee to the country he's been trying to lead for at least the last six years. Oddly, it featured a lot of Mitt Romney on video, in an edited setting he controls.

When Romney finally came out (after a long performance art piece by Clint Eastwood) his message was that a) he's an American and b) Americans "deserve better" than what Obama has given them.

"When the world needs someone to do really big stuff, you need an American," Romney told the crowd to cheers. He told a dark story of decline under Barack Obama, declaring "this Obama economy has crushed the middle class." He blamed the president for trends that have been underway for 30 years, and which accelerated under George W. Bush. "For the first time, the majority of Americans now doubt that their children would have a better future," he lamented. Like Paul Ryan, he talked about college students returning home to live with parents.

Most of the speech aimed beyond the convention floor to the undecided voter. It was a soft sell, featuring stories about his parents and family and anodyne thoughts like, "If every child could drift asleep wrapped in their parents' love, and God's love, this world would be a better place."

He took a sad tone about Obama's failure, speaking directly to people who voted for the president.

"How many days have you woken up thinking something really special was going to happen in America?" Romney asked. "Many of you felt that way four years ago. You know there's something wrong with the job he's done, when the best feeling you have is the day you voted for him."

But the core of his pitch is that he's a businessman, charging that Obama "took office without the basic qualification most Americans have: He'd never worked in a business." Aside from bashing Obama, though, his rote telling of his Bain days was flat, and it repeated what earlier speakers had told the crowd, some with much more flair.

Unlike prior nights that focused on big GOP political figures, most of Thursday night was given to regular people who knew Romney in some capacity. There were some genuinely affecting and effective moments, particularly from members of Romney's Mormon church. An elderly couple talked about his kindness to their dying son, who made out his will, with Romney's help, at age 14. Pam Finlayson followed up with a story about Romney, her bishop, visiting her premature baby – and much later, when the daughter died, taking time from his presidential campaign to offer condolences. "Loving our neighbor: We can talk about it, or live it. The Romneys live it every day," Finlayson told the crowd.

But she was followed by a slash and burn oration from Staples CEO Tom Stemberg, who gave the speech Chris Christie was supposed to give, praising Romney, savaging Obama and leading the crowd in a chant, "They just don't get it." He compared penny-pinching Bain CEO Mitt to "someone who knows how to waste $535 million on Solyndra." Still, it was an odd segue from stories of kindness, disrupting a kind of momentum.

There were also a surprising number of references to Romney running the first Olympics after 9/11, a sign that the GOP can't give up on running on that fear even 11 years later. But it was an odd touch in a night designed to defeat the man who killed Osama bin Laden. Likewise, some of his biggest applause lines came when he attacked Obama on foreign policy, showing that the GOP crowd still hungers for more wars and more confrontation (although they cheered when Eastwood said Obama should have withdrawn from Afghanistan. Go figure).

I can't be sure Romney harked back to a bygone America his opponent has ruined more than other Republicans. But there were a remarkable number of references to America and Americans that sounded as though the president stands slightly outside. The most obvious was the strange declaration that to do "big stuff you need an American." There were also the standard charges that Obama doesn't quite understand our country: "He attacks success … In America we celebrate success; we don't apologize for success." And Romney couldn't make a speech without his old chestnut about the president "apologizing" for America.

"I will begin my presidency with a jobs tour," he pledged. "The president began his with an apology tour."

Romney also put the blame for political division solely on Obama, suggesting he's introduced race into a country where it doesn't matter. He talked of visiting monuments to war heroes, where "there's no mention of their race, their party affiliation, or what they did for a living."

There's no doubt Romney was upstaged by the strange "surprise" appearance of Clint Eastwood, which pushed the convention back 15 minutes and disrupted any momentum the night was gathering. Romney had the crowd cheering when he finished, but it seemed more like duty than elation (after Chris Christie chided them for failing to show enough enthusiasm for party leaders). Even if this was a speech designed to carry beyond the convention hall, if it didn't wow them here, I'm not sure it'll wow them out there either. Romney didn't succeed in reintroducing or reinventing himself for the rest of the campaign. "I am what I am" may have been the most truthful statement of his whole campaign.