Prince Harry, popular as ever?

The harder he parties, the more we seem to love him 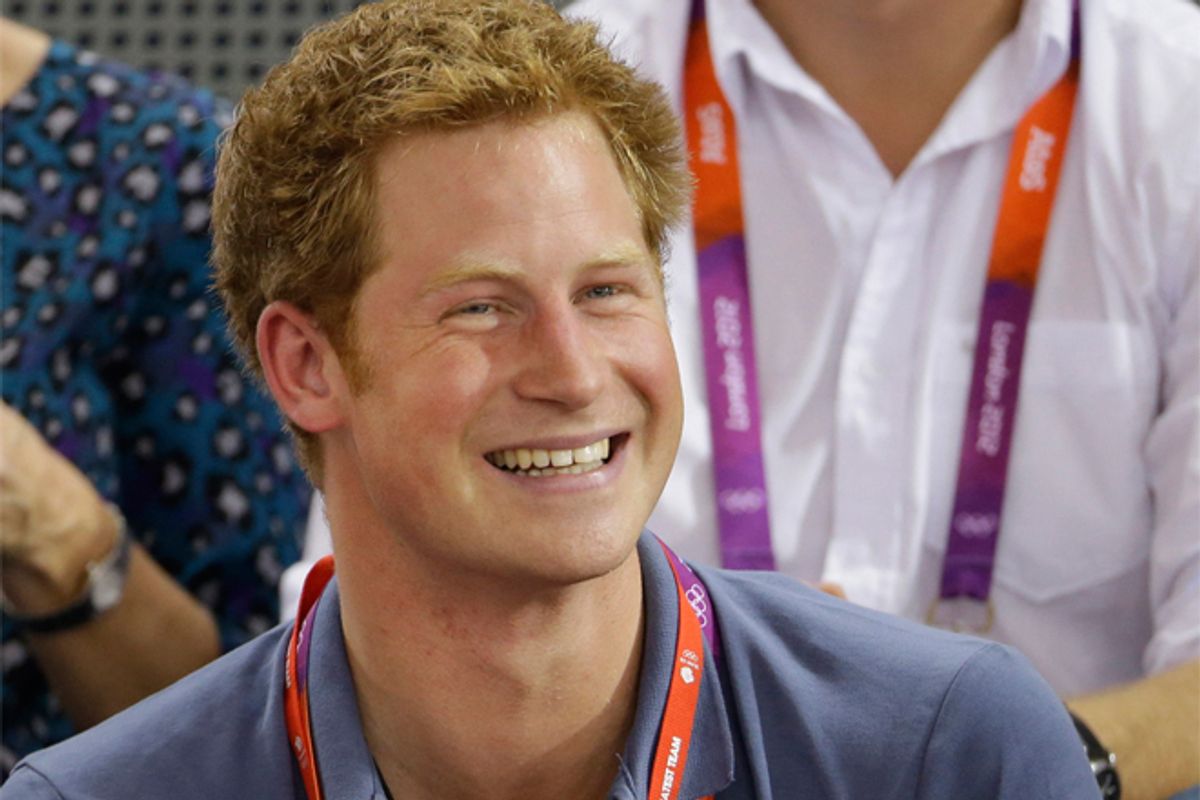 Far from destroying his reputation, saucy cell-phone snaps of him playing strip billiards in Las Vegas earlier this month made many believe the third in line to the British throne to be cooler than ever.

It wasn’t his first time to have embarrassed his family with an indiscretion that captured global attention — or emerged even more popular.

Now there can be very few people with an internet connection who aren’t familiar with Harry’s torso since the gossip site TMZ published fuzzy photos of the young royal baring all while cavorting with scantily clad women in a hotel suite.

Although the pictures stirred media outrage at home and a somewhat farcical debate about whether British newspapers should refrain from publishing photographs that everyone has already seen, many reacted by showing support instead of scorn.

No doubt in expectation the 27-year-old would face tongue lashings in both the royal household and the army regiment in which the captain serves as an Apache helicopter pilot, fellow servicemen and women took to Facebook to applaud his debauchery.

More than 24,000 people have joined the “Support Prince Harry With a Naked Salute” page, which shows dozens of meagerly-attired male and female military personnel, their modesty preserved by strategically deployed weapons and combat gear.

They're not alone. One newspaper poll last week said 68 percent of respondents believed the prince’s escapades to be acceptable for a young, single man on a private vacation. A mere 22 percent said they weren’t.

That should come as no surprise for a prince who’s dug himself out of plenty of tricky situations: wearing a Nazi uniform to a costume party, smoking cannabis and drinking under age and using racist language to describe fellow servicemen.

Being seen drunkenly stumbling from nightclubs, cozying up to attractive young women or, now, cupping his genitals have only enhanced his bad-boy appeal.

His weekend in Vegas shows he’s apparently not ready to assume the mantle of maturity many hung on him after he briefly served in Afghanistan in 2008, then soberly represented his grandmother, Queen Elizabeth II, on a tour of Belize, Jamaica and the Bahamas earlier this year.

But among royal family members often criticized for being aloof and behind the times, Harry is seen as a breath of fresh, if perhaps somewhat beery, air — a man of the people.

“He’s a good lad, Harry,” said Mark Higgins, a 31-year-old personal trainer from London. “He’s not doing anyone any harm and he brings a bit of normality to the royals. Why shouldn’t he have a bit of fun if he wants to?”

“Awww, he’s just a young lad having a laugh!” said Charly Leaden, a 24-year-old bar worker in a smoker’s raucous chuckle. “He’s lovely,” she elaborated. “I’d totally do him! He’s very dashing and he’s got a fit body — even if he is, you know, ginger.”

However, not everyone’s impressed. Although they may be outnumbered by flag-waving monarchists who came in their millions to watch last year’s marriage of Prince William and Kate and this year to witness the queen’s jubilee celebrations, many Britons are staunchly anti-royal.

The opinion of Jeff Mason, a heavily-pierced 20-year-old student, was no less vitriolic. “The debate shouldn’t be about whether it’s right for a royal to play naked billiards, or whether the photos should be published,” he said. “It should be about why we give a flying f*** about him in the first place.”

However, professional royal-watchers are confident Harry’s place in the public’s affection remains secure.

“It won’t do him any harm in the long run,” Arthur Edwards, a veteran royal photographer with the tabloid Sun newspaper, said in an interview. “He’s not committed any crime, he’s just embarrassed himself and he’s done that before and it’s not affected him, so this won’t cause him too much of a problem in the future.”

Nevertheless, officials may be worried more possible revelations will damage the royal family. According toone report, some of the partygoers who joined Harry in his Encore Wynn Hotel suite were using cocaine. There are also claims of a video.

The Las Vegas Review Journal quoted an unnamed source as saying Harry’s game of birthday suit billiards pale in comparison to “other shenanigans.”

The source characterized them as “something pretty gigantic."

If Harry did anything illegal in room 2401, however, so far it’s stayed in Vegas.

But even if more tabloid headlines emerge, don’t be surprised if the prince — who’s expected to undertake a new deployment to Afghanistan — turns out to be truly bulletproof.