Teen heroin use on the rise

And more and more opiates are available over the counter. Just another way the War on Drugs is missing the mark 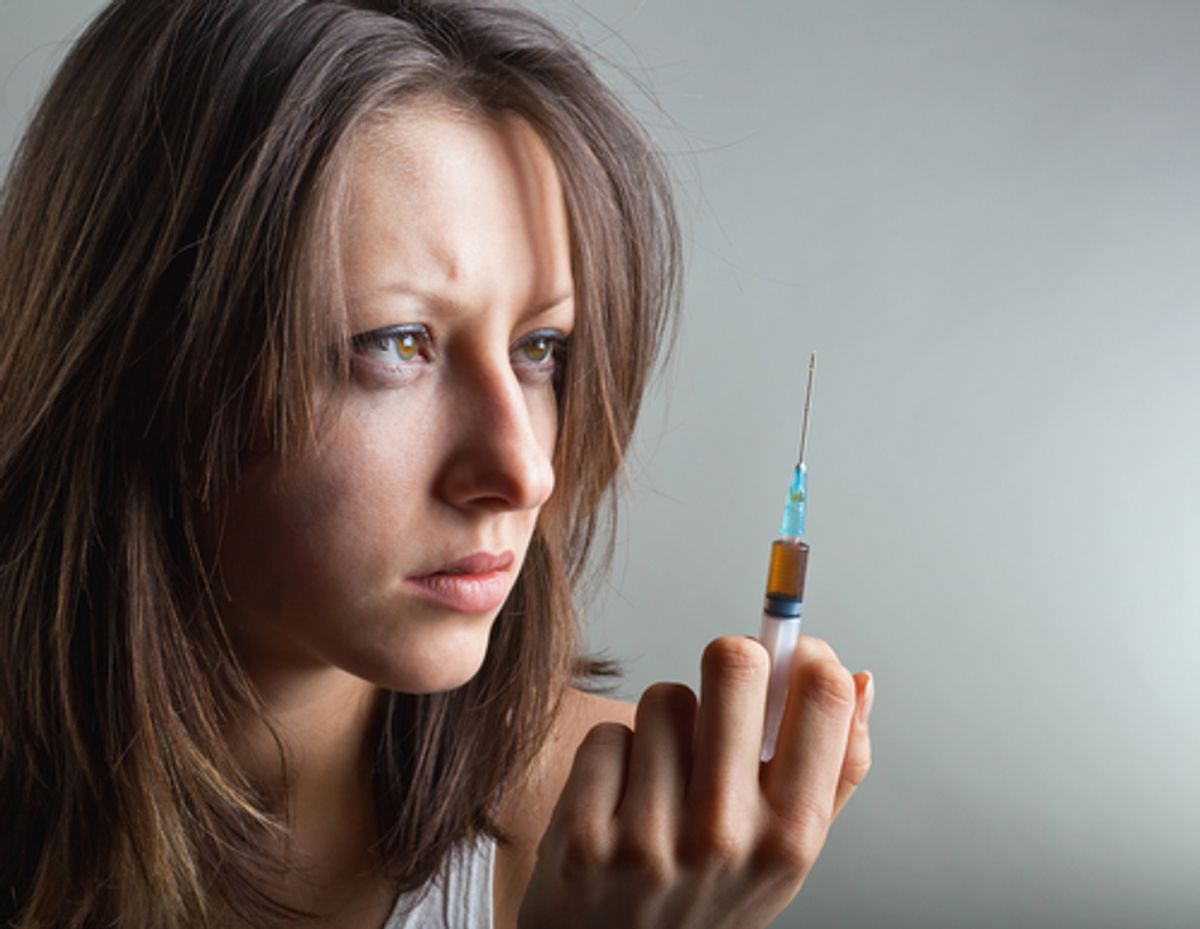 It was the British novelist LP Hartley who famously wrote, “The past is a foreign country, they do things differently there.” Nowhere is this truer than in the world of the junkie, where the landscape changes so quickly and dramatically that the dope fiend of 1998 now looks like some lumbering victim of evolution to the younger using set.

The most startling thing about the new breed of heroin addict is both their age and social status. Newspaper reports from across the country tell us that heroin use is skyrocketing among middle class, suburban teens. From La Crosse, Wisconsin to Chicago, Illinois, the stories are eerily familiar: suburban teens are turning to heroin in greater number than ever before, after first getting their habit going with prescription painkillers. NBC News’ recent piece on rising teen heroin use only served to confirm the narrative: the spiraling use of painkillers among teens is leading to an epidemic of heroin use. Indeed, by the DEA’s reckoning, Americans consume 40 percent of the prescription drugs in the world, despite only making up four to five percent of the population.

It’s little wonder that a generation weaned on prescription opiates would soon turn to heroin. The cost ratio is stark. According to streetrx.com, a user-contributed site that collates “the latest street prices for prescription drugs,” the standard black market cost of Oxycodone is approximately one dollar per milligram. By contrast, heroin in New Jersey can go for as low as $50 dollars a bundle (approximately one gram) and, according to anecdotal evidence on forums like opiophile and bluelight, a 0.1 “stamp” of heroin can run as little as five bucks and can be snorted or injected without any of the added hassle of grinding and filtering pills.

Then there’s this: according to the Substance Abuse and Mental Health Services administration [SAMHSA], initiations to heroin have increased 80 percent among 12- to 17-year-olds since 2002. More troublingly, young people are dying in greater numbers, too. In 1999, the number of fatal overdoses in young people between 15 and 24 was 198. Ten years later, it had risen to 510.

Frank Greenagel has been on the front line of this issue in New Jersey, a state whose officials claim its rate of heroin abuse is twice the national average. Greenagel is a recovery counselor at Rutgers University—the site of the oldest Recovery Housing program in the world—and the current chair of the New Jersey Task Force on Heroin & Other Opiates.

He tells me that when he was hired in 2009, there was one student with an opiate problem. At a time when the program mostly consisted of young people struggling with alcohol use or drugs like marijuana or cocaine, a heroin addict on campus was considered something of a novelty. “Then, in 2009 and 2010, more and more young people started coming in strung out on Oxy,” Greenagel says. “I was amazed at how many people were suddenly coming into the program with opiate addictions. During the fall of 2011, eight out of 32 were on campus with various opiate addictions, heroin included. This year, we have 22 kids in recovery housing and the majority of them—12 in all—are addicted to either heroin or pain-pills.”

Heroin has been around for a long time. How does Greenagel account for the recent upswing in popularity?

“Look, a lot of these kids wouldn’t have tried heroin because of the name,” he muses. “It has that whole inner city, needle association. But a pill? Something created in some multi-national corporation’s pristine laboratory? Their grandmothers take this stuff; it’s the same goddamned thing! They’ll take a pill made by Perdue before they’d buy a bag of dope from a stranger in an alley.”

Whitney, a 25 year-old recovering heroin addict from a middle class family in the small town of Cody, Wyoming, can attest to that. “I had a wonderful childhood and a very supporting and loving family,” she recalls. “I was a very good student, played many sports and had many friends. And even though I started experimenting with drugs and alcohol when I was 13, it never got in the way of my education or other activities I participated in.”

Whitney’s experience was echoed in a number of the young people I interviewed. Alex, a recovering addict in her early 20’s from Portland, Oregon, recalls that as a young child, she was adopted by people who were “were middle class and for the most part stable,” and that she was sent to “good schools and got fair grades” until she went to high school.

The first opiates that Whitney, like many of her peers, used were prescription pills.  “I experimented with Vicodin, Percocet, OxyContin and other opiates before I tried heroin,” she says, adding that heroin wasn’t easily available to her until she moved from Cody, Wyoming to Seattle.” In Seattle, she ran with an “uppers, party crowd” who introduced her to drugs like cocaine, ecstasy and Adderall. She soon found herself in rehab.

“I was there for 30 days and then moved to a halfway house in St. Paul, Minnesota,” she recalls. “I stayed clean for three months, moved to Minneapolis, met a boy in the program and started using heroin with him. The first time I tried heroin I injected it and that’s how I used it from that point on.”

Alex, who was introduced to heroin by a boyfriend, shares a similar story. “I got into a relationship where the guy I was dating was a total addict,” she says. “I found him using one day and told him to give me some, which was the first time I used heroin. I injected it for the most part, though I also smoked it at times.” While heroin was the first opiate she tried, she’d previously used pain medications. And finding heroin was much easier: “There is a huge abundance and it’s fairly cheap,” she explains. “It took me about a year to go from buying from a simple drug dealer to buying direct from the Mexican mob in Portland.”

Talking to these ex-drug users, I was painfully aware of both the parallels and vast differences in our initiation into the junk world. I began using in the 90’s in Los Angeles—when cheap, strong black tar heroin was everywhere. When I was first offered smack, I was intrigued. As a lifelong admirer of the likes of Lou Reed, William Burroughs, Lenny Bruce and Chet Baker, I suppose I’d been subconsciously priming myself for a life submerged in negatives pleasure of dope. Hell, to many of these kids I wonder if Kurt Cobain would seem like a hopelessly outdated junkie archetype. But one of the common themes in our stories seems to be the ineffectiveness of drug prevention education. I was a child of the “Just Say No” 80s who decided to say “yes.” For the likes of Whitney and Alex, it was all about DARE.

“I participated in the DARE program when I was very young and learned about drugs in health classes and other drug awareness programs in high school,” Whitney tells me. “I honestly didn't think much of it and thought that I would never ever use any of those drugs so I didn't really take the information seriously.”

The ineffectiveness of DARE is a sentiment echoed by Alex. While it taught her that “heroin was a bad idea,” she admits that "I am the type of person who learns the hard way—through my own mistakes and experiences.”

Frank Greenagel agrees that current educational programs aren’t responding to this new crisis. “We need more education about opiates in schools,” he says. “Schools are educating about alcohol, marijuana and cocaine—not about painkillers. That kind of education is easy to implement and pretty cheap to do.”

Whitney feels that over-prescribing doctors are at the root of the problem. “Painkillers are over-prescribed in the US and that they are too accessible to young people,” she says. When I bring this up with Greenagel, his response is more measured. While he understands the urge to crack down on over-prescribing doctors, he strikes a note of caution. “It’s very American to have this knee-jerk reaction—we gotta get rid of all pills! I’m no fan of the pharmaceutical companies but for people who truly have pain, those opiate painkillers work better than anything else and they have a right to get and use them.” Indeed, the growing panic over painkillers is already having a devastating effect on legitimate pain patients.

For the final word, I spoke with Carlos, a 59-year-old addict who is the handyman for an apartment building in the Bronx. Carlos looks a little like Charles Bronson’s older, degenerate cousin and is on the methadone program these days. His arms are covered with old track marks and prison ink depicting images of saints and portraits of his many grandchildren. I have known Carlos for a few years and his recollections of scoring in bombed-out buildings in Alphabet City—an area that is now typified by high-end boutiques and trendy restaurants—are a signifier that we, too, are from different sides of a generational divide.

I ask him about the younger generation of users and his take on the prescription pill epidemic. “Kids these days don’t know how to handle themselves,” he laughs over coffee in a Queens Boulevard McDonalds. “They [are] all raised on that milk-sugar pharmacy shit. No street smarts. Look at that fucker who killed all those people in the drugstore.”

I ask if he means David Laffer. “Yeah,” he says. “Killed four people over some fuckin’ pills. Had a wife who could have gone out whoring. Could have made some bread a million different ways and instead he wastes four innocent people. Fucking dummy. Shit like that gives us all a bad rep.”

So what does he believe the right move is? Does he support the DEA crackdown on prescription pills? Carlos shrugs. “Don’t mean nothin’ to me,” he sighs. “Ain’t gonna stop dopefiends using dope. If they close down the supply of pills, junk is still gonna be around. I was 14 when I first shot dope and there was none of that OxyContin shit back then. If they really wanna stop people getting shot and locked up and getting crazy, then they should just sell to us direct. Collect some taxes on that shit.”

Carlos points in the general direction of the Elmhurst library. “They’re closing down libraries. The schools don’t have the shit they need. The buses don’t run, the traffic lights don’t work, and we’re borrowing money off the fuckin’ Chinese. Everybody’s crying poverty. Why not collect some tax offa dope sales and keep the libraries open? Give the kids some books! Teach ‘em not to live their lives the way I did.” Carlos winks at me then takes a sip of his coffee. “Then they won’t have to worry about motherfuckers like me stealing their shit to feed the fuckin' monkey.”

Tony O'Neill is the author of several novels, including Digging the Vein and Down and Out on Murder Mile and Sick City. He is the co-author of the New York Times bestseller Hero of the Underground (with Jason Peter) and the Los Angeles Times bestseller Neon Angel (with Cherie Currie) and a regular contributor to The Fix who has interviewed Jerry Stahl and argued against abstinence, among many other topics.